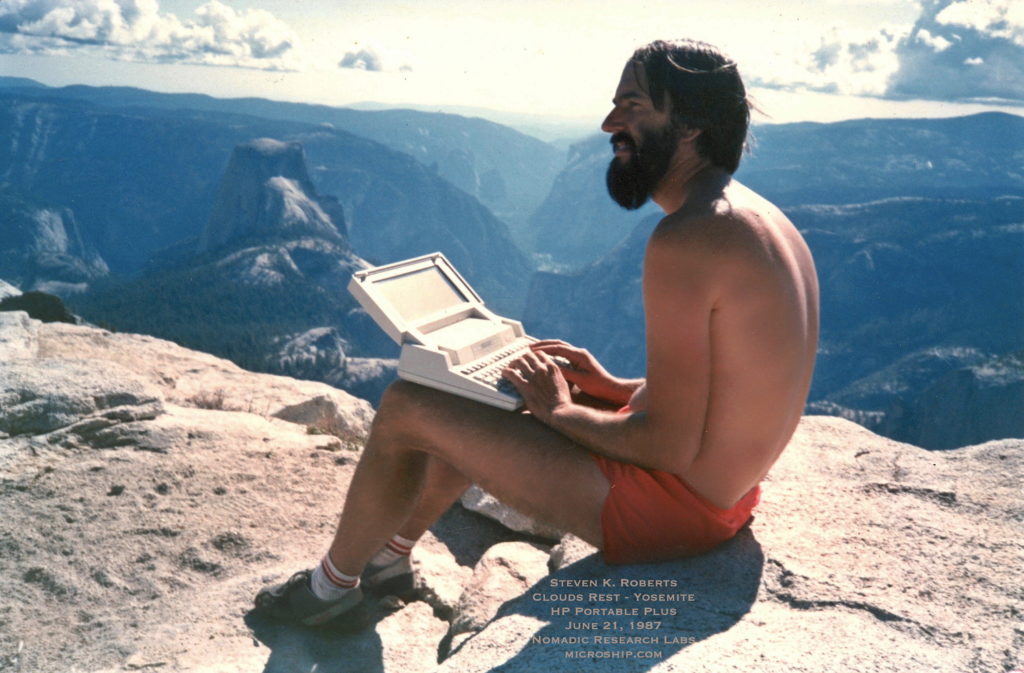 It was 1983 in a place that inspires long-distance travel… Columbus, Ohio.

“The Idea” was but a week old: I would spend the next six months trashing my suburban lifestyle, building an electronic cottage on wheels, and restructuring my freelance business to allow it to operate under remote control. In August, I would pedal away from Columbus forever — slowly exploring this crazy planet while funding the adventure with a sporadic flow of words.

That concept was clear enough, but some of the details were elusive back in those waning years of CP/M. What kind of computer would I use? Today, there are at least a dozen hotly competing PC-like laptops — but in 1983, the only reasonable choice was the Radio Shack Model 100… all 32K of it.

Since I would be network-connected to the home office, I elected to forego portable file storage (an audio cassette recorder) and accept the limitation of one project at a time in the tiny memory. Those were grim days. It worked, of course, but freelance writing via the unaided Model 100 was like running a company from a tattered Queen Anne candlestand: starting a new story required me to get rid of the previous one, weed out unnecessary E-mail, and keep a close eye on the available space lest things spill over the edge and crash to the floor.

All that has changed, of course. I now do business from a hi-tech executive desk, with massive file space, a huge work surface, and a variety of serious built-in tools including Word, 1-2-3, dBASE, Rolodex emulator, time manager, communications software, archiver, and a host of utilities. The H-P Portable PLUS (along with its various cohorts) gives me at least as much processing power on the bike as can be found in the average small business.

But there’s more to the story, much more. I still carry a Model 100, now caseless and almost unrecognizable with its two megabytes of address space, ROM software library, handlebar keyboard, and waterproof bicycle console display. It has become the “text-capture system” for the long, quiet hours I spend on the road — allowing me to create and edit articles or chapters while pedaling along. As shown in the illustration, this processor has become part of a strange hierarchy, supervised by the bicycle control processor and communicating with the others through a serial crossbar network.

The details of all this are a bit beyond the scope of this column, but they can be used to make a point: computers should be adapted to humans, not vice versa. This fundamental truth should guide every laptop purchasing decision, for the old notion of computer literacy (learning how to work on the computer’s level) has become obsolete. A key rule of breaking away from the office: Make the machine fit your lifestyle.

I want to talk about two radically different systems in this column, with the intent of illustrating some of the trade-offs involved in choosing a portable computer. First, let’s look at the H-P and consider what features make sense in a portable.

There are several good reasons to buy a laptop, all of which have one motive in common: freedom. You want to decouple yourself from the desk and work on airplanes, in the park, at home, on the foredeck of your yacht… wherever. So, you won’t want to lug around too many accessories, nor do you want to be tied to commercial power lines any more than necessary.

The obvious temptation is to go with the latest breed of PC look-alikes with built-in disk drives. They’re very alluring: unlimited space, familiar PC applications, even — in some cases — back-lit, high-contrast screens. But there’s one major problem I haven’t seen adequately addressed in the flurry of recent laptop articles: poor battery life.

Physical movement takes power — lots of power, compared to the amount required to shuffle electrons around. As such, machines that depend upon built-in disk drives get desperate for charge current every few hours, in some models, as few as four. I don’t consider four hours of use to be very liberating, unless you’re just trying to take advantage of commute time.

Some users haul spare batteries around (roughly a pound per amp-hour at 12 volts), along with boxes of disks and other accessories. And while this is all very exciting compared to a desk bound PC, it doesn’t get you very far into an adventure before your machine starts dying of thirst.

The H-P Portable PLUS, though not quite 100% PC-compatible, takes a different approach. All major application software is in “ROMdisk,” a phantom Drive B that looks like a few subdirectories of .COM, .EXE, and .DOC files. TheRAM— in my case 1.2 megabytes — can have partitions between system work space and RAMdisk (drive A).

The net effect is a whole megabyte of low-power, ultra-fast disk, along with a library of MS-DOS applications that are invisible until needed. External 3.5″ drives, printers, and other computers can be attached via a daisy-chained “hplink,” but this is not required for normal use. There’s an RS-232 port for non-HP interfacing, and a modular phone jack on the back provides easy access to the internal 1200-baud Hayes-compatible modem.

And… the battery provides somewhere around 25 hours of use between charges.

As unglamorous as it sounds, battery life is no small matter: it’s something to consider carefully when choosing a laptop. What, exactly, do you want the machine for? If the intent is shuttling data between home and office systems, there may be some advantage in 100% PC-compatibility, the convenience of internal drives, and a power-hungry but beautiful electroluminescent-backlit screen. But for business trips and weekends (or lifetimes) in the mountains, factors such as ruggedness, lack of moving parts, built-in ROM applications, and relative freedom from power lines are much more important. That’s why I chose the H-P for my main machine, along with an external battery powered 3.5″ drive that I use only for archiving. (Both the Portable and the drive, incidentally, get most of their charge current from my bike’s solar panels.)

Now let’s look at the other end of the laptop spectrum — at what’s become of the little Radio Shack Model 100. This clever machine, now four years old, has been the most popular briefcase computer ever produced. At four pounds, capable of running for days on four AA batteries, it’s an easy-to-use package that has changed the workstyle of many a journalist. It’s also very cheap — providing a lot of processor for the dollar.

But until recently the disadvantages were maddening. Tiny memory, 8 X 40 character low-contrast screen, limited built-in applications… these were things users could live with as long as there was a real computer back home. But the machine’s popularity has spawned a host of third-party vendors, most notably Traveling Software of Bothell, Washington. As of this spring, the lowly 100 can now be expanded to any mix of RAM and ROM up to two megabytes — along with an internal 1200-baud modem, additional battery capacity, and low-overhead lifelines to traditional PCs. There’s still a bit of residual Radio Shack clunkiness, but the cost/performance ratio of the 100 and its large-screen brethren is impressive.

It was this that led me to build one into the bicycle. I needed a rather intimate connection with the system bus (to deal with the handlebar keyboard and other odd inter faces), but was reluctant to do surgery on the H-P; that would be like adding a power take-off to a new BMW for pumping water and splitting logs. It’s quite possible, but would void the warranty.

But the 100 was much less complex: a twist of a coin pops the case open, revealing all the guts on three boards: the main logic card, a standard Hitachi LCD, and a keyboard. Using a published schematic and some downloaded info on the architecture, I threw away the keyboard and case, mounted the LCD on my bike’s control panel, and found a niche for the logic deep inside the nest of cables and circuit boards behind the console. A Motorola 68HC11 processor inhales parallel ASCII from the handlebars, translates it into row-column addresses corresponding to those of the discarded keyboard, then hands it off to some CMOS logic that tricks the 100 into thinking that someone pressed a key.

On top of all this — along with a few other odd interfaces that would dismay a Radio Shack service center — I added the Traveling Software Ultimate ROM and two megabyte Booster Pak. The resulting “biketop computer” serves as a robust front-end for the H-P system in the trailer which follows me, once again adapting the machines to me instead of the opposite. (much more Winnebiko II tech info here)

While a full-time nomadic cycling life is, admittedly, an extreme application, it does illustrate the liberating potential of this new wave of computers. It can be compared to buying a camera for travel: full-scale 35-mm SLR systems are seductive, since you can swap lenses, bodies, flashes, filters, and everything else, in the process becoming a photographic “power user.” But all that stuff is heavy and delicate, and in the heat of adventure is best left behind. 35-mm pocket cameras on the other hand, while scorned by the pros, offer a whole new level of flexibility: you can take them everywhere without having to spend all your time and energy babysitting a case full of expensive equipment.

Life, as always, is a tyranny of trade-offs. As the laptop market heats up, some of them will surface with a vengeance — demanding careful attention to the intended applications before making a purchasing decision. Just remember the key point: it is the machine’s job to serve you, not the opposite.