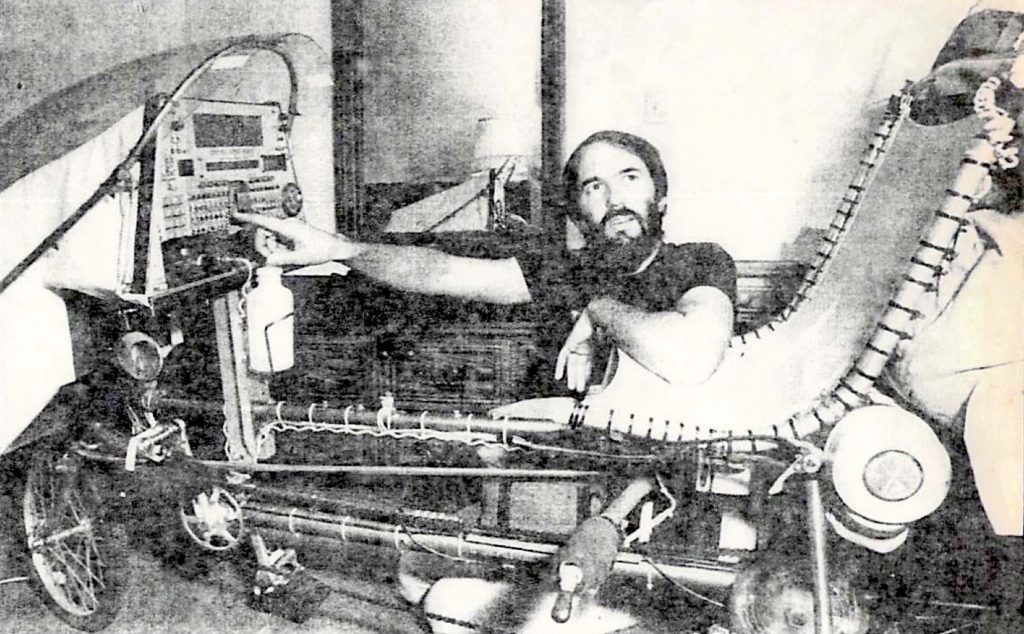 enroute down the coast on the Winnebiko II…

LAKE OSWEGO — A self-described “high-tech nomad” and free-lance writer, Steven K. Roberts says he takes 10,000 mile bicycle trips around the United States because “it is fun.”

He is on his second such odyssey and on Wednesday stopped in Lake Oswego.

To add to the fun, his custom-built bicycle is equipped with not only a ham radio, but also five computers that run on batteries, which are charged via solar panels attached to the front and rear of his bicycle.

Although Roberts modified the bicycle to his needs, the basic frame was built by Franklin Recumbent Bicycles, Columbus, Ohio. Roberts rides the bicycle in an almost lounging position, with his legs extended out in front and his handlebars at his hips.

Roberts and his traveling companion, Maggie Victor, both of Columbus and both 34, displayed the computerized custom-built bicycle at Expo 86 in Vancouver, British Columbia, before beginning the latest trek down the West Coast that will have them exploring in 30 Western states for the next 18 months.

On Wednesday, the 8-foot bicycle with 36 speeds that weighs 220 pounds took up nearly half of Roberts’ motel room in Lake Oswego, along with Victor’s 100-pound, 18-speed bicycle.

Roberts began his first 18-month, 10,000-mile trip in September 1983 and from that experience has written a book, “Computing Across America: The Bicycle Odyssey of a High-Tech Nomad,” which will be published this fall by Learned Information Inc., Medford, N.J.

While riding, Roberts feeds information into the computers with specially designed keys that are installed on the underside of the handlebars. While stopped he uses a portable computer.

Roberts said that while he was on the road it would be easy to become disconnected from family and friends. He solves that with what he calls electronic mail.

He has subscribed to the General Electric Network for Information Exchange, known to users as “GEnie,” that he can hook up with via his computer and satellite to exchange messages and information with some 27,000 other subscribers.

“I’ve got all my friends to sign up, even my parents who are in their 70s are getting a computer and signing up for GEnie. The computer is my link to the universe. I very seldom use the telephone for voice messages,” he said.

When Roberts finished high school, he spent six months in college and then another 18 months in the Air Force. He also hitch hiked around the United States, a youthful rite passage he called the “obligatory wandering.”

But corporate life was not for him, he said. He sold his suburban home and hit the road. He has no fixed itinerary and supports himself with his writing and an occasional computer consulting job. He communicates once a day via GEnie with a small office he keeps in Columbus.

“Writing came along because it’s a license to be a generalist. My bottom line is fun. Obviously I could make more money doing something else,” he said.

Roberts said it was difficult to attach a price to his bicycle “because I built almost everything.”

“It could possibly be reproduced for $50,000, but what price do you put on eight months of my time plus the time and expertise of my friends?” he asked.