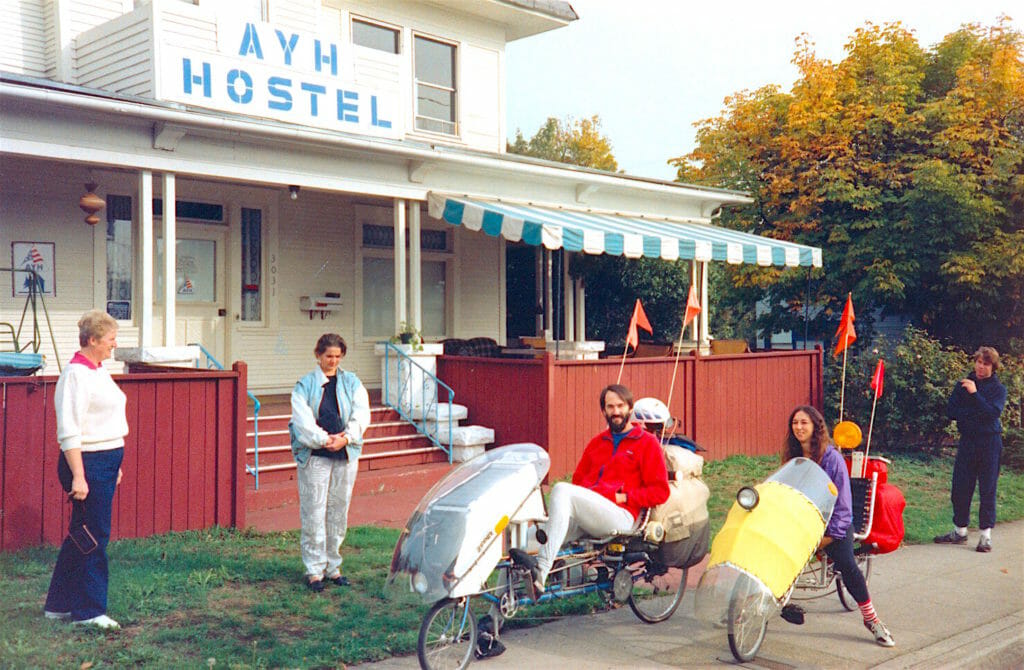 The warnings were true. It does rain in the Pacific Northwest.

The trip from Castle Rock to St. Helens was a 42-mile marathon of spray and puddle, drizzle and bubble. Trucks blew by in a rage of wild grayness, my microphone tube filled up with water, and I settled into a grim rhythm of pumping water under my wheels with Gore-tex legs. Such are the rides that don’t fit the freewheeling fantasy — the days when waitresses look you over with obvious concern for your health as well as the messy cleanup job that will follow your visit.

It has been an eventful week, with too much to cram into a column: camping in the rain, riding lively Klein mountain bikes down the Punji Stake Trail, passing the Trojan nuclear power plant (PREVENT TROJANOBYL says the bumper sticker), getting tips on winter street survival from a homeless woman in Portland, and meeting politicians who see us as potential campaigners. The life of constant change I have written about is upon us now, and we’ll just have to settle for a few vignettes.

“This is bicycle mobile KA8OVA, listening,” I said into the foam-tipped tube at the corner of my mouth while touching a handlebar button with my left thumb. The reset beep of a distant ham radio repeater told me that I was hitting the 147.26 machine in Longview, Washington — on the Oregon border about 25 miles away.

I told him yes I was — and where I was, and why. After a basic exchange concerning radios and roads, I popped the question: “Hey, Toby, I’m about ten miles north of Castle Rock at the moment, and don’t think I can make it all the way down to your end of the world before dark. You have any club members up this way?”

Well, one thing led to another, as it always does, and soon there was a new voice in my ear — KA7QOX, otherwise known as Al. Did I need a place to stay? Hey, no problem…

Within the hour, we were unpacking our bikes in a micro-hangar — surrounded by dozens of radio-controlled aircraft. A quarter-scale Cessna took up one end of the room, its detached wing against the wall over 8 feet long. Five or six helicopters, exquisite machines accurate in every detail, lay poised in various attitudes — some suspended from the ceiling, others on the floor. Walls were hung with aircraft photos, unfinished projects were layered on cluttered benches, and all around were the hallmarks of a passionate interest in this intricate hobby. I felt right at home.

“Ah, play,” I said to our host. “I see you have no plans to grow up either.” Al, balding and nearly old enough to be my father, grinned knowingly and agreed. His career is industrial control system repair, but his life’s work is radio control — and as the evening progressed we sensed the kinship that comes from high-tech obsession: showing each other our creations, swapping tips, and enjoying that warm glow of mutual respect. There really are a lot of interesting people in the world…

After a morning helicopter flight and hearty breakfast we were off, my head filled with fantasies of adding a mini-chopper to the bike and letting it roam ahead to transmit live video of the mysteries around the next bend. Why not? “Viva Madness!” writes Ray Rolls, one of my correspondents here on GEnie… and indeed, why not? What else, besides learning and fun, should be our bottom line?

Onward. Chats on the radio, new friends gradually fading into the static. Coffee stops, curious stares. Heavy weather, wringing out gloves, wiggling numb toes. The terror of the Lewis & Clark bridge, which managed to combine all the most unpleasant cycling conditions into a single 10 minute ordeal: rain, gusty sidewinds, slippery expansion joints, heavy two-way traffic, logging trucks, steep grades, and no escape route. I caught up with Maggie at the summit, touching her shoulder en passant and offering a word of encouragement. Her whimper was lost in the roar, then I was flying downward at 37 mph, rain stinging my face, bike jolted sideways by surprise grooves and passing 18-wheelers. Passing? At this speed? What the hell’s the hurry, guys? The little blinking green LED on my console kept saying OK — but what does it know outside its artificial little world of nicely decoupled 5-volt logic?

But hey. The miles go by, experience becomes memory. The next afternoon we were in Portland, Oregon.

Normally, finding contacts is easy. On my first trip around the country I would roll into town, scan the faces in the crowd for that familiar spark, and gently hint at my need for a place to stay. Rarely did I wander around a city after dark and try to rationalize a night of credit-card camping. But two things conspired to make Portland difficult: a pair of 8-foot high-tech recumbents gives the misleading impression of complete self-sufficiency, and Portland is a city with a huge street population — hundreds of homeless people living on the handouts and waste heat of a large but friendly town. Conversation was easy and pleasant, but finding a place to crash nigh impossible. After giving up, we fought our way across the city after dark to the AYH hostel — which, like every other hostel, was absolutely unlike every other hostel.

Hostels have character. This is one of a network of places that helps shape the traveling culture — not the tourist culture (which provides the shallow thrills of “attractions” while insulating people from wherever they are), but the traveling culture, which is exactly the opposite (a lifestyle instead of a diversion). At hostels you meet people on journeys, people who throw their entire selves into the experience of movement, change, and meeting other people. Long bicycle odysseys are commonplace in the hosteling world, as are solo wanderers from Australia, Swedish girls on holiday, and people of all ages seeking a bit of work to fuel the next stage of travel. Someday I’ll tell you more about the hosteling life, but suffice it to say that we found ourselves in a sort of haven from the confusion of the city, grateful for the chance to sit around the big table and swap stories with new friends. A pretty 18-year old Canadian girl named Bettina cut my hair for the next day’s TV interviews, and my winsome Lifestyle Maintenance Manager put the kitchen to good use. Ah, pasta.

Everybody we meet thinks we’re intriguing, but some kinda crazy to be this far north this late in the year. TV weather reports talk about storm systems and Alaskan fronts, and the single word “south” is my stock answer to that constant question: “where ya headed?” As we fled the continuous roar of Portland on the delightful Terwilliger Trail, we could feel it: trees denuded, leaves on the ground soft from rain, joggers puffing breath from faces locked into grimaces of self-imposed agony. Tomorrow we’ll dive back into the soup after a lakeside day of writing and relaxation — down to Corvallis, home of Hewlett-Packard portable computers… a mecca of sorts. And closer to the sun.

“Back on the freeway, which is already in progress!”