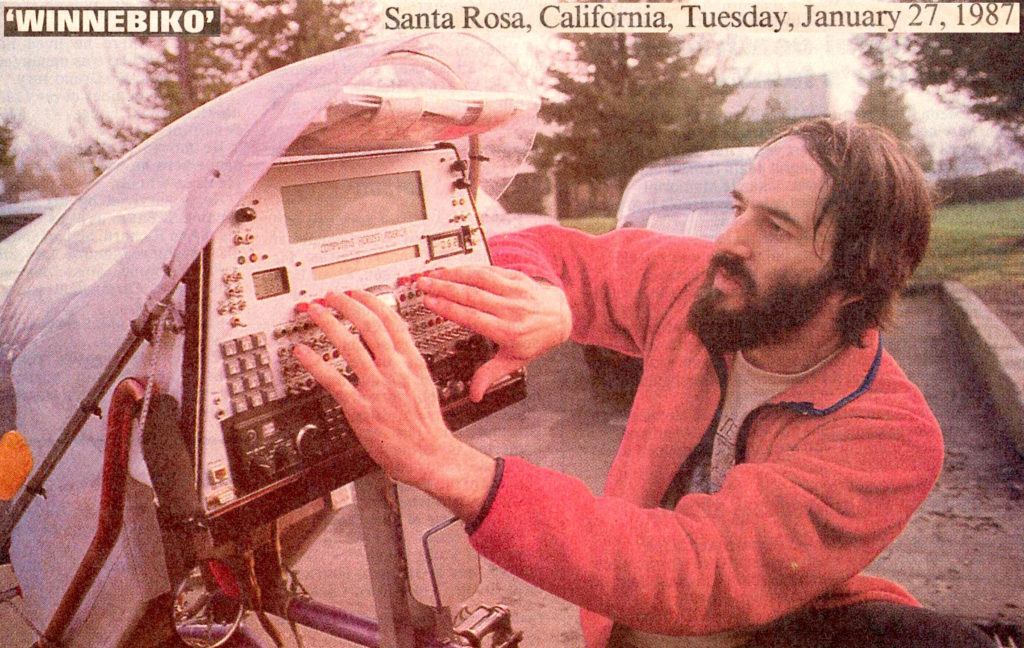 High-tech nomad writes while he cycles

Ohio freelance writer Steve Roberts likes to write his magazine articles and books while on the road, the pavement whizzing only inches below his typing fingers.

While his feet push the pedals of the 8-foot-long recumbent computerized bicycle, his hands control the handlebars and word processor keyboard at his side.

The 34-year-old Columbus, Ohio, resident has logged more than 11,000 miles since leaving home last August on a trek that has no final destination, no target date for completion. “We’ll continue until we burn out,” said Roberts.

He and traveling companion Maggie Victor, 34, who pedals a second recumbent bicycle and operates a ham radio, are biking through the Sebastopol byways today. They are on their way to Silicon Valley where Roberts plans to add more computer “toys” to his computerized wonder on two wheels.

The high-tech nomads were in Santa Rosa to visit Lemo USA Inc., makers of some of the electronic gear Roberts used in the design of his computer bike.

Roberts designed his self-contained rolling word processor because he explained, “I have three passions: writing, biking and computers.”

In 1983 Roberts made his first cross-country journey alone on a less sophisticated computerized bike energized by solar panels. That journey covered 10,000 miles and took 18 months.

The bike was retired so that Roberts could complete his story about the adventure in the book, “Computing Across America: The Bicycle Odyssey of a High-Tech Nomad” which will be released next month.

The adventure was not enough for the man who discovered he could make a living as a freelance writer while pursuing his fascination with computers and love of the road.

The first trip left him frustrated because he couldn’t write as he pedaled.

That is not the case today. The word processor will record those fleeting thoughts as they pop into his mind any time he is on the road.

The bike, which he calls a “Winnebiko,” has five portable computers, a satellite data link, ham radio stations and navigation equipment, plus dedicated controllers.

The vehicle, which weighs more than 200 pounds without the lanky 6-foot, 4-inch Roberts, has reached 50 miles per hour. But Roberts prefers more leisurely speeds. He and Victor are not in a hurry. They average eight hours a day on the road, covering 30 to 40 miles a day.

Two liquid crystal displays are on the console in front of the rider. The keyboard is built into the under-seat handlebars with eight buttons for text along with various other controls.

Roberts is never out of touch with editors around the country, or his family and friends in Ohio. He has electronic mail service and can connect to any pay phone.

Because Roberts attracts the curious wherever he goes and because he is tiring of answering hundreds of questions each day, he is programing a two-minute monologue that will allow the bike to answer for itself.

“If I am in a restaurant and see someone looking at the bike, I can trigger a device that will start the bike’s computer talking,” said Roberts. He will also program the computer to answer the most often asked questions about how the vehicle works. “I also might program it to say something like, ‘hi cutie.'”