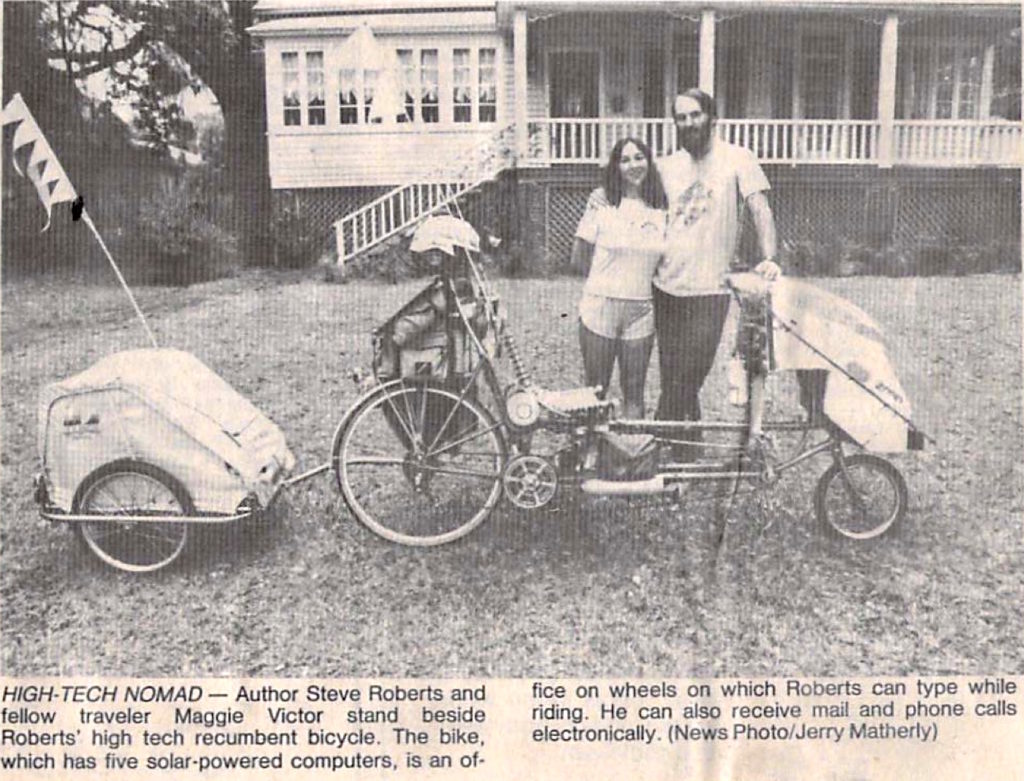 What has five computers, 54 gears, 2 wheels, 136 feet of zippers, two solar panels, 108 square feet of tent space, a motion-sensitive security system, more than a million bytes of memory, a speech synthesizer, a tiny T.V. set, shortwave radio, a telephone access via autopatch, one seat, a 6′ 4″ pilot and over 15,000 miles on its digital computer?

The answer is Steven K. Roberts, high-tech nomad, and his Winnebiko.

Roberts and fellow traveler, Maggie Victor, were in town earlier this week. The two are on a meandering cycle tour which began in Columbus, Ohio. Roberts designed and built his computerized recumbent bicycle himself. Ms. Victor’s bike is similar but doesn’t have all the communication systems.

The two were pedaling over the Sidney Lanier bridge Monday evening and listening to the ham radio on Roberts’ bike, when they heard about a ham radio party on Union Street.

“My husband was talking on the ham radio and began talking to Steve,” said Old Town resident, Charlotte Williams. “We were having our ham radio Christmas party and he came to me and said, ‘You don’t mind if I invite two people I’ve never met to spend the night, do you?'”

Mrs. Williams said that when Roberts and Ms. Victor rode up in front of the house, they looked like two space-ships. “They had so many lights and gadgets it was really strange-looking. All of a sudden, the whole party was outside on the front lawn in a circle around them.”

The 275-pound electronic cottage on wheels is the only machine of its kind in the world, according to Roberts. The bicycle, custom built from the frame up with the latest in technology, has been Roberts’ office since 1983 – yielding thousands of miles of high adventure.

Using the onboard word processing system and handlebar keyboard to write while he rides, the lanky author said he slowly explores American culture — returning nightly to the satellite-based global information networks that have become his electronic home.

What possessed an otherwise stable man to trash a “successful” suburban lifestyle and move his writing and consulting business to the road?

“I was living in a city I hated, in a house I hated. I decided to build a life-style that combined all the things I liked. Travel, adventure, meeting people, communications, computers, high-tech gizmology, writing and publishing,” Roberts explained.

He said the lifestyle is a combination of hobby and profession and, in a sense, gives him both freedom and security, a combination rarely found in nature.

Robert’s fourth book, Computing Across America: The Bicycle Odyssey of a High-Tech Nomad, due out in January, is a wild celebration of exuberant adventure covering his first 10,000 miles. In it, readers may share his encounter with convicts in the Maryland woods, read about the ice cave in Colorado, the ultimate blind date in Key West, dehydration in Utah and life in dataspace.

When the book comes out, he’ll be doing a media trip to promote the book. There’s a whole chapter devoted to the Hostel in the Forest just outside Brunswick. “It’s a great place,” said Roberts.

He also publishes a monthly magazine from his office on wheels. Roberts said his Journal of High Treknowledgy is an ideal way to keep up with the ongoing journey. Anyone wanting to share the odyssey may order a sample copy for $3.

Roberts said he has had an offer to go to Europe and do some television over there and there are preliminary negotiations underway for a movie in Hollywood.

Roberts said he uses all the technological systems built into the bike to handle text, filing, business correspondence and all the management problems that any office has. He also writes for various magazines and sends the stories electronically from the Winnebiko.

“I can fire texts directly into the publisher’s typesetting systems,” he explained.

He said he uses a recumbent bicycle rather than the tradition diamond frame because it is designed to make human-powered travel as comfortable as it can be. “Thousands of hours on a skinny seat, hunched over drop handlebars, staring at the road? No way,” said Roberts. “On the recumbent bike, with full-back support, I can put more power into the pedals; it’s aerodynamically more efficient and there’s no pain,” he explained.

And, as a added bonus. “I can easily see the lands I’m riding through — certainly one of the objectives of all this.”

Roberts said he isn’t interested in speed and that the usual cruising speed is in the mid-teens, depending on “what we had for breakfast.” The pair said they get about 40 miles per omelet or per pizza.

Ms. Victor is collecting recipes as they travel. She plans to publish a Computing Across America cookbook.

The Winnebiko’s speech synthesizer makes interesting comments, depending on the situation. If a person approaches with a lighted cigarette, the speaker emits the sound of two gun shots and says, “This is a no-smoking area.”

If a suspicious-looking person approaches, the bike says, “You are being monitored by a starship. Do not touch or you will be vaporized by a laser beam.

It will also flirt with females. “Would you like to have a ride on me?” the bike purrs if a woman approaches.

Roberts communicates daily through the GEnie computer network and periodically checks into others. Interested persons may contact him directly with invitations, questions, or project proposals: [obsolete contact info redacted]