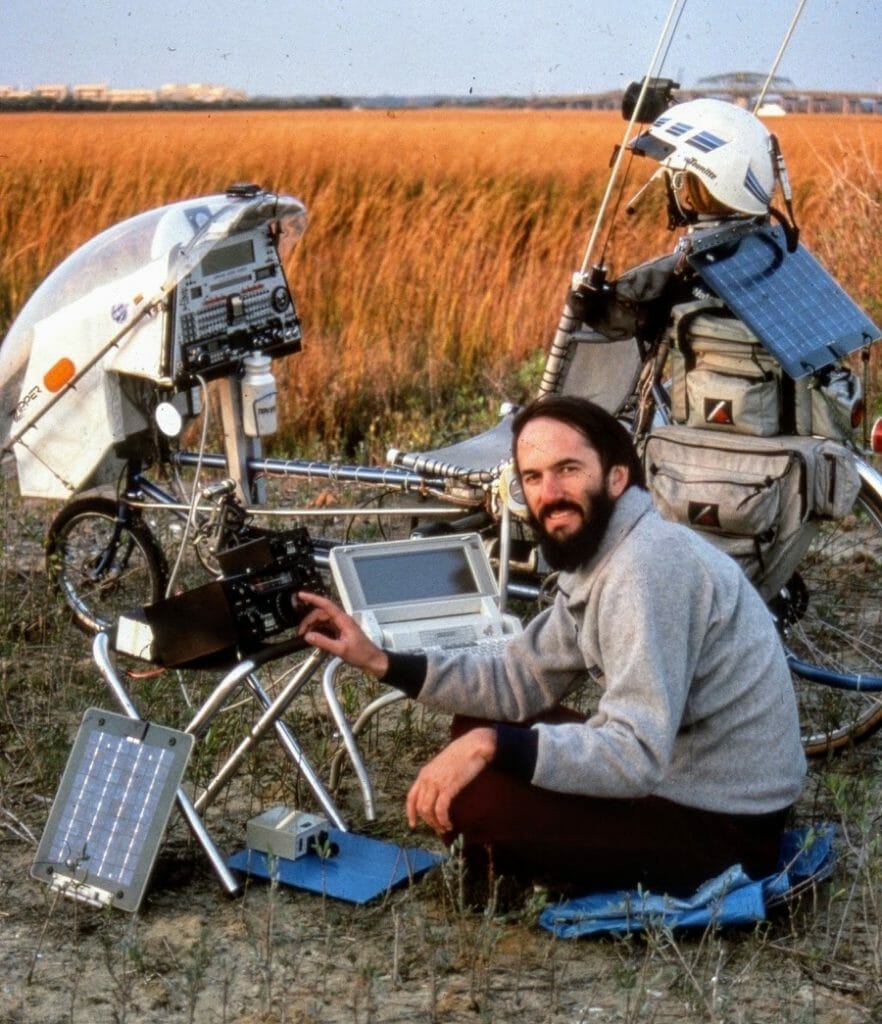 The gorgeous photo above was taken by Karen Greene during our stay on Sullivan’s Island near Charleston… another from this shoot, with Maggie in the photo, became the cover of the Feb 1988 issue of 73 Magazine, featuring an article about the ham-radio aspects of the adventure.

His 6-foot-4-inch frame comfortably snuggled into the seat of the aerodynamically designed bicycle, Steven K. Roberts takes full advantage of a freewheeling lifestyle.

Roberts, 35, is a free-lance writer/computer engineering consultant who has pedaled 15,000 miles across America while writing stories about his experiences on the road and about the equipment that affords him the unique lifestyle.

The bicycle he rides is a custom-made technological marvel that combines the freedom of bicycling and state-of-the-art technology to give Roberts, a self-proclaimed “high-tech nomad,” a machine he calls his “Winnebiko.”

The recumbent bicycle is eight feet long and tows a trailer that allows Roberts to carry camping equipment, a ham radio and a 5-inch television set in addition to almost anything else one would need to be comfortable on the road.

The specially designed bicycle allows Roberts to sit upright near the rear of the bike with the handlebars below the seat. The pedals are at the front, allowing him to stretch his legs as he pedals along. A computer panel allows him to perform a multitude of functions while cycling, including writing and sending material and letters.

The bike is equipped with an alarm system that is activated by any motion and even asks “Are you going to ride me now, Steve?” when Roberts turns on the systems.

The Louisville, Ky., native has written four books about his bicycle, his travels and the people he has met. He began his first cross-country trek in Columbus, Ohio, in 1983, skirted the eastern and Gulf coasts to the Southwest, and ended his trip on the West Coast.

He arrived in Charleston last week on the first leg of another journey that’s taking him south for the winter, he said. While in the Charleston area, Roberts and his traveling companion Maggie Victor, are staying at the home of Leonard and Tessa Green of Sullivan’s Island.

Roberts met the Greens while communicating through his personal computer. He has a network of five computers designed into the structure of his bicycle. They allow him to stay in touch with his clients — Roberts makes his living writing for computer magazines and road testing the equipment he uses. Three offices he has scattered around the country serve as home bases.

Roberts’ on-board computer, built into the front of the bike behind the windshield, is powered by solar panels. He uses a binary keying system built into the handlebar to compose material as he pedals across the country.

He designed the bicycle himself and has modified it since his first trip to the West Coast.

The former computer engineering student dropped out of college during his freshman year, but liked the work enough to continue working in the field as a hobby for another three years before starting his own company.

Roberts owned an engineering consulting company in Columbus for computerized industrial control systems for six years. But writing was another one of his passions. He said he divided his time between both interests by consulting with computer firms and writing freelance magazine articles about the machines he helped design.

One day he woke up and decided he was tired of his middle-class life style, Roberts said. “I was working at a job I really didn’t like to pay for a lifestyle I really didn’t like. One day I took my assets and my liabilities, threw them up in the air and pedaled away.”

Selling his house and his car, Roberts said, he established offices in Cary, N.C.; Chico, Calif., and Columbus to handle accounting, media/communications and a publications office for his stories.

The network works well for him, he says, because it allows him the freedom to travel and maintain his income as well as serving to help him fulfill his passions.

And passion is what Roberts is all about. His passion for freedom of movement is evident in the way he talks about what he does — which is pretty much what be wants to do.

Using his computers to communicate, Roberts meets scores of people — brain-to-brain, he says — and makes many friends. Some, like the Greens, invite him to stop by their homes when he’s in their part of the country.

He writes about these people, his experiences, and constantly works to perfect his equipment, most of which is provided by sponsors.

Usually there’s no specific place to be at any specific time. His longest day was one during which he pedaled 136 miles. He must meet deadlines for the publications he writes for, so his nomadic lifestyle has some constraints, but not many.

“It doesn’t matter where I am, my clients can contact me through my offices or through the computer,” he said.

From Charleston, Roberts and Miss Victor are probably going to stay close to the coast and head south, he said. He plans to visit friends in Georgia and may buy a boat to serve as a mothership once he gets to Florida.

It took him only a few thousand miles to realize that people are wonderful and that everybody is the same, Roberts said. His experiences have taught him a lot about himself and his attitudes about other people and things.

But the really important thing about biking around the country, he says, is what he has come to consider home — the entire United States.

Roberts said he will continue to pedal around America until he gets sick of it, and then he’ll find some thing else to do. What that is, he doesn’t know yet.