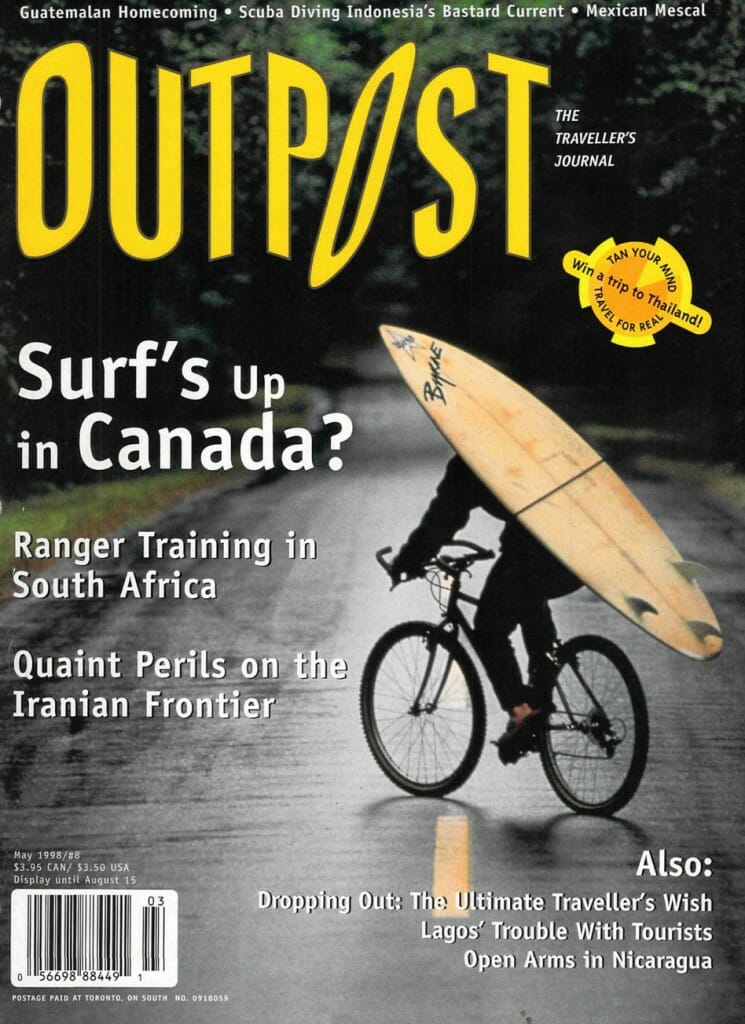 This delightful Canadian travel and adventure magazine always had interesting destination pieces, and I was hoping to write for them from the seat of the Microship during the “Clueless and Lark” expedition. I’m happy to see that they are still around. This article catches the beginning of the transition from Silicon Valley to the Camano Island woods, an epoch that I never imagined would last 13 years.

by Jean-Francois Hardy
Outpost
May, 1998

Don’t mess with Steve Roberts. Back in middle school, a boy named Little Jeff and his posse besieged Roberts with water guns and got a harsh surprise. From a Popular Electronics article, Roberts created a stun gun, with two water pistols connected to opposite terminals of a charged battery. [Note: with a high-voltage circuit in the loop] “They never touched me again,” he recalls with a smile. Today, Roberts is a friendly, six-foot-four bearded giant, but his eyes still glow with a child-like curiosity for the world, and whiz-bang gadgetry still fascinates him. He heads the Nomadic Research Labs, an outfit dedicated to the pursuit of freedom through electronic wizardry.

For more than 11 years, Roberts criss-crossed the continent on what he came to call BEHEMOTH (Big Electronic Human Energized Machine, Only Too Heavy), a recumbent bicycle decked out with everything from a GPS system and cellular Internet link to microwave motion sensors and a handlebar-mounted binary keyboard. For the 2,500 subscribers of his Nomadness newsletter, and for the countless puzzled souls he has met on the road, Roberts symbolizes emancipation from 9 to 5 drudgery.

Back in 1983 in Ohio, a younger Roberts, feeling uncomfortable with the confines of a suburban lifestyle, sold his house and hit the road on a recumbent bicycle. Using a Tandy 100 laptop and a modem with suction cups to link it to pay phones, he communicated with Arpanet, the community of hackers and programmers that would eventually become the Internet. “Once you move to Dataspace, your physical location becomes irrelevant,” he explains. “The feeling I had was one of moving about the neighbourhood, dropping in on friends.” For the better part of the next decade he pedalled around the U.S., making a living freelancing articles and speaking about his life, travels and technology at conferences around the country.

But Cyberspace, though it freed him from geographical constraints, could not suspend gravity. While riding the 150-kg BEHEMOTH along Lake Michigan in the late ’80s, Roberts began fantasizing about taking technomadness to the water in a small sailing ship that would carry him and his “autonomous mobile information and communication platform” into a world without hills. “The technological challenge became uppermost in my mind.” says Roberts, who envisioned a small vessel, in which the weight of technology could be forgotten and the winds befriended. He piled on as much technology as could fit: a better graphical user interface, improved remote operation facilities, self-monitoring consoles, video production equipment, full Internet, ham and satellite links, 1080 watts of solar panels, and of course, a bed.

As the “Microship” idea grew, however, the material world, the very creature Roberts sought to escape on BEHEMOTH, reared its ugly head. “I can’t just go and park in somebody else’s garage for a while and use their hammer. There’s milling machines, fiberglassing, there’s shelves full of exotic goo, oscilloscopes, lab equipment, parts… it all has to go somewhere.” That somewhere, in the years since he began work on the contraption in 1993, was perpetually borrowed lab space, until early this year when he and his wife decided to settle down for a while on Camano Island, near Seattle. There they will build a 240-square-metre pole building and complete work on his and hers Microships.

Some would say that the day Steve Roberts took out a mortgage was the day the music died. Roberts, ever the philosopher, replies: “That’s what nomads do for a change of pace — settle down.” But when the twin Microships are completed in 1999, the Roberts’ plan to travel down the Mississippi to the Gulf of Mexico, then up the east coast to Maine and back down the St. Lawrence Seaway to the Great Lakes.

It appears the music has not died alter all, only the beat has changed.