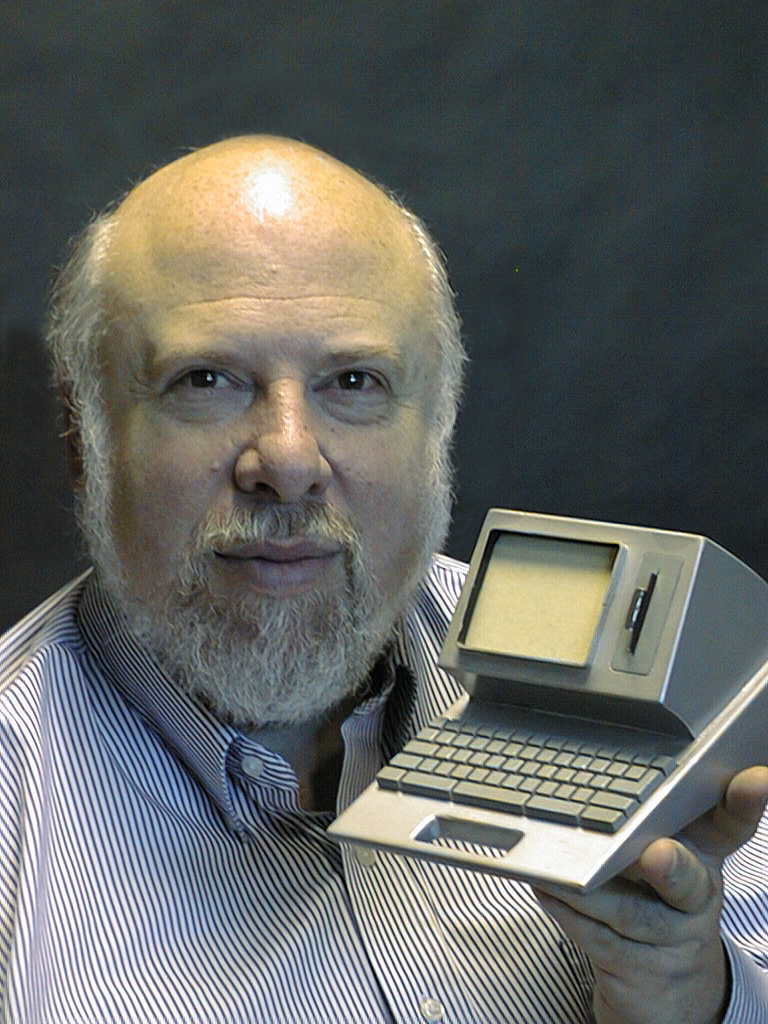 At the very beginning of the BEHEMOTH project, I landed in Silicon Valley… and my first corporate host organism was Information Appliance, the playground of Jef Raskin (who started the Macintosh project at Apple in 1981, along with countless other fascinating creations over the course of his life). He offered lab space as I was designing the new bike, and naturally it incorporated a FORTH engine inspired by his work on the Canon Cat and a newer 68000-based project. Jef was a marvelously entertaining and brilliant character (with some serious piano chops), and I enjoyed countless breaks from steep learning curves to hang out in his office bantering, engaging in excruciating wordplay, and sharing tales of Deep Geekery across a huge technological spectrum. He remains one of my heroes.

Jef wrote this little piece about an encounter one afternoon in 1988. The photo above shows Jef Raskin holding a model of the Canon Cat (photo from Wikipedia)

You have to understand, Steve is a kindred soul. We rattle in different jumping beans, but we’re both always off, exploring (or just always off; or just human beans). There he was, at our little company, scrounging as usual. Scrounging is good stuff, and both scrounger and scroungee benefit.  I have been a practitioner of the high tech scrounge for years; getting a few million bucks from vulture capitalists is a slick scrounge that not only funds buying toys for years, but allows you to hire a batch of playmates to use them with at the same time. So l know how he works.

Anybody who’d ride a 350 pound bike has got to be a showoff.  I know about this too; when I go to the symphony I wear a black dracula cape and a ruffled shirt. So, when he picked up three balls in my office (ostensibly there for my kids to play with when they visit) and started juggling them, I knew he was saying, “Not only am I a technical genius, and a mad nomad, with a crazy lifestyle that 18 out of every 21.6 people I meet are envious of, but I can juggle, too.”

Quickly stifling my first impulse (holding out my hands and saying “do a pass, Steve,” thereby establishing equality and comradeship) I conceive a more evil plot. “Gee,” I say, not lying at all, “I always wanted to do that. Could you show me how?”

Take a showoff and ask him to teach you a favorite trick (especially when he knows you can’t learn it quickly enough to be a threat) and you’ve got him with a leash tied right around his ego. It works on me, so I knew it would work on him. With Maggie and some of my playmates watching (sorry, I mean, my employees, who were instinctively hip to the whole thing and didn’t say a word), Steve started to show me the ropes. Remembering the kinds of mistakes I made when I started I dropped the balls, chased after them, threw them too high and too low. Steve patiently corrected my “mistakes” and with what seemed to him like amazing rapidity, I began to “learn” how to juggle. In five minutes I was doing your basic juggle with three balls, somewhat shakily.

He was almost speechless, and his estimation of my ability to learn was rising rapidly when I shifted smoothly to some other well-known juggles with an expertise that clearly bespoke some prior practice. I did my special “finish” with a toss over my head which I caught behind my back, and he came after me in mock anger. “I’ve been hustled.” he managed to say just before all conversation dissolved in gales of laughter.