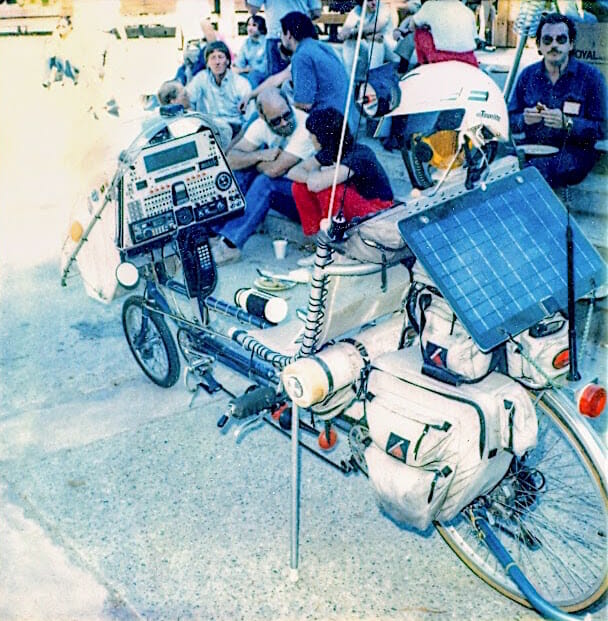 (photo above by David Warman)

I have to stop now — ignoring the jazz improv in the next room, the food, the naked poolsplashes of frolicking loonies, the whirling articulate sounds of synthesizers, the interactive video, the party. Yes, I’m closing my senses to the play of my peers, goddamn it, for tomorrow comes the shock. I actually fear it: I fear returning to the real world the way a wilderness trekker fears the City.

I am now at the post-party of the Hackers Conference (Hackers 4.1?), and we’re all fresh from a mad, delicious microworld of brilliance that throbbed for three days in the Santa Cruz Mountains. It was a time of galvanizing contact between brains at play… a time of self-definition, software magic, video, human connections, and — most dramatically — a rare liberation from the need to translate.

It was also a time of outrage. CBS News sent a crew in on Friday, the first day of the event, promising not to get in the way if we would only, please oh please, let them get a scoop for the national news before our exploits hit the wires on press day. Fred Peabody and John Blackstone showed up with a camera team, and for about six hours they followed us around, miked random conversations, interviewed some of the more colorful hackers, and taped the spirited opening session.

On Saturday night, between graphics demonstrations, a hush fell over the crowd as the CBS Evening News tape was loaded into the projection video system. Under a picture of a chip, the anchorman read, “An unusual conference is under way near San Francisco. The people attending it are experts on a technology that intimidates most of us, but has changed the way we live. John Blackstone reports…”

And then there we were — the bike, the woods, the “sleepaway camp,” the crowd of mingling intellects. An ominous voice-over intoned: “A small revolutionary army is meeting in the hills above California’s Silicon Valley this weekend, plotting their next attacks on the valley below, the heart of the nation’s computer industry. They call themselves computer hackers.”

So far, well, not too bad — assuming the viewers were intelligent enough to recognize a metaphorical slant. But the term “revolutionary army” implied some kind of cohesion, and there was a grumble from the crowd. The camera closed in on Jonathan Post, from Rockwell. He spoke forcefully: “The people who are gathered here changed the world once; if we can agree on where to go next, we’re gonna change it again.”

Then the CBS slant became excruciatingly obvious: “What hackers have learned to do with computers has changed the world, for both good and bad. They’re the people who dreamed of and built the personal computer industry.” (Right about here appeared a close-up of me with the Winnebiko.) “But the same kind of talent is creating never-before dreamed-of crime. Because for a computer, the only difference between a hundred and a million is a few zeros.”

Donn Parker of SRI International (speaking from his office, not the conference) was next: “And so, in fact, criminals today I think have a new problem to deal with, and that is how much should I take. They can take any amount they want.” A chorus of boos rose from the audience. What was this story about? Certainly not US!

The narrator went on. “Telephone companies are the most victimized because those who break into phone company computers can link up for free to computers around the world.”

To this, Richard Fitzmaurice of Pacific Bell added a stab from his office: “You’ll hear the term computer hacker, computer cracker; we call them computer criminals.” A loud roar of outrage filled the auditorium.

The piece went on, detailing intrusion into military and research computers, then offered a tight shot of Parker saying, “A hacker today is an extremely potentially dangerous person. He can do almost anything he wants to in your computer.” By this point the room was a seething mass of slandered professionals, and order was lost.

What happened here was a sobering, frightening look at what’s become of our news media. Maggie and I are used to teevee inaccuracies, but it’s never been a real problem — it’s hard to grossly distort a generally upbeat story of strange people on bizarre bikes (and the publicity helps sell books). But here we saw what happens when the news organization has a preconceived sensational story and finds a convenient timing hook: CBS committed a smoothly edited crime against the truth, using selected snippets of video to create a best-selling image of evil geniuses gathered in a dark conspiracy against the world’s computers. The reality was different: this crowd of CEOs, authors, software designers, visionaries, and eccentric intellectuals was committed to the future of human information management — how we will deal with masses of text, communications, graphics, interactive media, games, education, and so on. It was also a crowd dedicated to circumventing limitations, conjuring magic from computers, and making the kinds of conceptual leaps known as invention.

After the Canonized Bullshit (CBS), we found ourselves in a curious state. Some angrily advocated a libel suit, others plotted smear campaigns or more subtle attacks. Some proposed that we find another name for ourselves besides the oft-poisoned term “hackers,” while many promised to write letters to CBS and Peabody’s new employer, ABC 20/20. And a good number just grew more cynical, discounting the truth of everything else on the news (it does make ya wonder about election coverage and other matters of national interest, doesn’t it?). In an ad hoc gathering, those of us who happened to be journalists stayed up until three, drafting a press release and formulating the hackers’ “official” response. In short, we all learned something.

Despite the intrusion of ignorance, however, Hackers 4.0 was a profoundly energizing event. Held at Camp Swig in the hills above Saratoga and catered with something approaching inspiration, it was a chance for people who spend most of their time in intellectual loneliness to pig out on wide-bandwidth communication. It was a look at Ted Nelson’s Project Xanadu, which purports to create a repository of human knowledge, infinitely interlinked and cross-referenced. It offered glimpses of nanotechnology, a future industry that could blur the distinction between man and machine. It was a chance to see three competing unreleased products in the interactive video field, presented in succession by their designers. It was an orgy of computer graphic play, where Leo Schwab’s engaging tale of intellectual property disputes with Pixar was illustrated by a unicycle juggling balls, a ball juggling unicycles, and other variations on the theme. (By Sunday morning, he had created an Amiga animation of a CBS logo being shattered by an axe labeled Hackers 4.0.)

In a place with this much unalloyed wit, humor was pervasive: context switches and parsing ambiguities were extracted from every speech string, and the subcultures of the industry’s heartland were evident with every wisecrack. “I’m considering leaving the computer field until UNIX and C are dead,” observed one fellow, while another described himself as “desperately seeking parenthesis in a world of semicolons.”

And, more than anywhere in a long time, this conference felt like home. Leaving it for the madness and traffic of Silly Valley was depressing and overwhelming… and it established a standard of socialization that will influence our six-month stay in the area.

Here is a very cool historical photo from the conference, showing Nolan Bushnell (founder of Atari) playing with a VPL EyePhone made by Jaron Lanier, with Larry Wall (author of the Perl language) looking on. The original of this image has been donated to the Computer History Museum.

So now it’s time to build the Winnebiko III. I write now from a place familiar to long-time readers of this column… Alan Selfridge’s house in Palo Alto. The bike lab is set up, and a string of negotiations is rapidly redefining the on-board system. I’ll save the details for the next column, once the specification has been frozen. But the whole control console will be replaced by a new one — featuring a backlit 640 X 480 VGA display with a touchscreen, running on a Chips & Technologies 286 supported by a FORTH-based 68000 for bike system control. Soft instruments, CAD, and satellite mapping on a bicycle… the mind boggles. And when the power’s available, it might even boot as a 386SX running Unix… I’ve always wanted a unixcycle!

I’ll spare you the details until it’s real — or until it has become such an all-engulfing project that I can think of nothing else.

But I do have a random observation or two.

It seems that every time I wander into a crowd with my bike, someone asks why I keep throwing massive resources at this insane venture when all good American engineering-literate 36-year-olds should be settling down, raising families, and making payments on things while maneuvering carefully along the career path. Wellll…

I’ve sampled that. I’ve tasted the gritty air of the mineshaft, sensed the health costs of digging full-time for sparkling nuggets of technology. I love the stuff; I’m addicted to it; I pedal it like a madman over mountains just to fiddle with its switches in the wilderness. But dedicate a life, or even a decade, to the extraction and polish of a single glittering orb? Never. I want it all. Now.

“But if you really want to succeed…” someone began the other day. Succeed! What does that mean, exactly? Simple: Success is simply the ratio of all you put out to all you get back. Period. You put out some combination of risk, discomfort, time, dedication, hassles, sweat, ideas, and money. You get back a mixture of fun, satisfaction, love, toys, power, sex, and money. Debits out… credits in.

Most people will, upon a moment’s reflection, agree with this — perhaps reordering the credits to reflect their priorities. Sex, money, power…

But the catch is this. Most people see the amount of money as an index that linearly tracks the rest — an accurate indicator of success (even if not its only component). This is as misleading as judging the health of America on the basis of the Gross National Product: every time there’s an auto accident, the GNP goes up a little bit.

And so I would say that yes, yes, I am a success — even if next month’s bills are yet uncertain. I’m living a life of fun, learning, new friends, and grand adventure. Money drops into my life now and then like scattered meteorites, brief exciting flashes in the void. But it’s enough (most of the time), and I’m too busy with projects to notice that my income is somewhere between the official “poverty level” and a mysterious national average. Yes, I’d like more. No, I’m not going to do much about it. Wanna buy a book?

Heh. That was fun. This story has followed me around for a while, getting edited here and there, traveling like a hitchhiker in my laptop and finding itself now on the 17th floor of the Palmer House in Chicago. Someone pointed out in the Scan-Tech crowd at McCormick Place today that the widest-bandwidth communications channel in the world is a 747 jet — considering the information content of the passengers. (so what’s the bod rate?)

Anyway, I’m here and gone during a single battery discharge curve on this battered HP, 5,000 air miles with a box of poised electrons, metered reluctantly with each keystroke to toggle a few gates and release microcalories as another story reaches escape velocity. My beard grows 1500 angstroms per nano-millennium… the data collection industry is healthy… and life back in Palo Alto, from my perspective of this instant, hums like a VCR with the PAUSE button depressed.