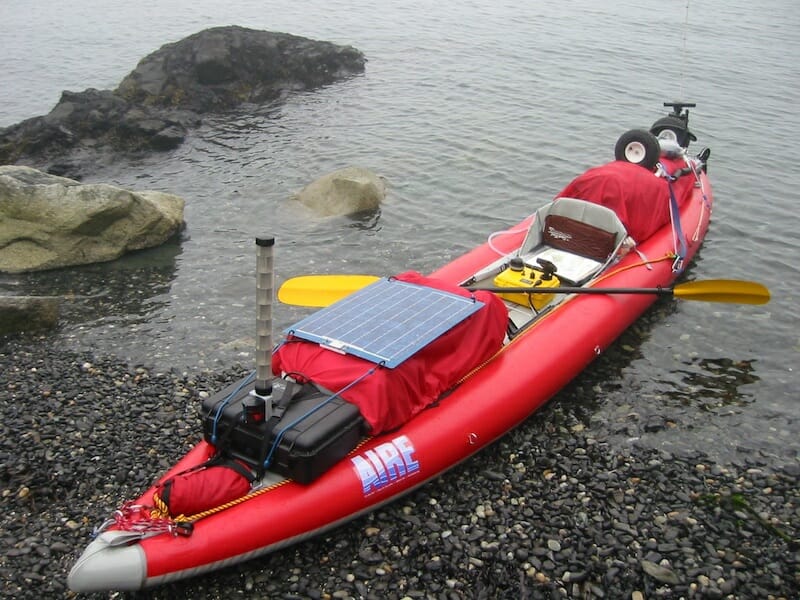 I was just sitting here thinking of some kind of simple logging application to help provide an objective external record of my progress toward nomadness, when it dawned on me (duh) that it’s already right here. I have historically viewed blogs as a sort of upgraded tool for publishing static content, but it will be much more interesting (and useful as a live project document) if I shake off that mindset and start tracking progress more actively. This has been suggested before, but old habits die hard.

OK, I’m going to try it… with less effort to polish these postings and much more attention to simply recording day-to-day activity.

I went to the Seattle Boat Show last week with my friend Dave Robb, and my first act upon walking in was to take a plunge I’ve been planning for a while. Given the size of the nets (tramps) on Nomadness and my need for an alternative to the capable but poky dinghy for local exploration, I’ve been planning to acquire another kayak… shorter and more “turn-key” than the venerable and much-loved Bubba. So I did it. Arriving soon is my new Hobie Mirage Revolution pedal-powered kayak, and I have a local buyer for Bubba (an Aire Sea Tiger inflatable that I have had for 3 years). It ends up being pretty much an even swap, so it’s not too painful financially, but I have lots of fond memories that give the familiar boat character… and it is surprisingly hard to let go. I hope the new one comes to feel as “personal” as did Bubba, which was a wonderful combination of kayak-camping and day-trip boat as well as being easily transportable without racks and other hassles. Comfy, too.

I’m sure I’ll have photos and other comments shortly after the Hobie arrives around the end of this month.

To bring you up to date on the larger issue, I need to comment a bit on the facilities. I’ve gone around in circles on this a couple times, basically trying to figure out how to set up a place to work on the boat (which has been sitting more or less untouched on her trailer since the haulout). Last week, I was pretty well convinced that the right approach was a 48-foot “reefer” semi-trailer for a mobile lab, my existing Wells-Cargo 24-footer for the gear staging area, and a temporary fabric tent suspended between two mast-hoisting gantry cranes. This plan also involved a bit of site prep and gravel, 200 feet of fencing to reduce mutual visibility of a too-close neighbor, and a significant project setting up new facilities in the Big Rig.

Sometimes I really have to try these things on and live with them in my head for a while before reluctantly admitting their absurdity. I already have a 3000 square-foot building that is almost completely dormant. Perhaps I should use it.

Of course, there are a few problems to solve… but it will be cheaper and quicker than the other approach. In addition to reducing humidity here in the forest, I need to finish the insulation retrofit that started during the rodent fiasco, wall off a couple areas that need to stay clean and warm (electronics lab and gear staging areas), and accelerate the reduction of excess stuff (a process my old friend Frank Feczko used to call “SRE” – Simplify, Reduce, Eliminate).

Current status on all this is a crude sketch and emails to friends who know more about concrete and building techniques than I ever will… and I’ve already started speeding up the SRE!

More soon on all that; in the meantime, here’s an ugly first-pass sketch (yes, I know there are CAD tools; I even have Google Sketch-Up, but this was done on a clipboard while walking around the lab yesterday). The overall floor plan is 40×56 feet (scale is 2′ per graph paper square), and this does not include the 13×56 suite of offices upstairs. The long bay at the left will be walled off and already has the good heat sources (Miss Piggy the woodstove as well as a monster propane-gobbling “unit heater”), and will be the lab. The middle area is an open work bay for big stuff, as well as the, um, “shrine” for Microship Wordplay. To the right of that is the machine shop; against the back wall at the bottom is the inventory shelving, and in the upper right is a walled-off area that is devoted to all the stuff that’s actually going on board the boat. A door from this leads directly to Nomadness.

Cheers from the nomadhouse,
Steve

Posted in Nomadness blog
← The Projects Flicker to LifeMusical Boats →