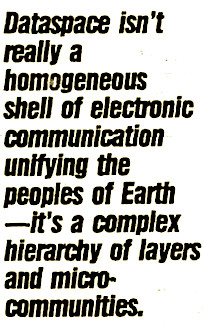 I have often mused about this article, and how it addressed a critical (but rarely discussed) issue at the time. I mean, think about it… in the mid-1980s, we suddenly had new tools that could render our physical location irrelevant, reducing borders to mere formalities. Yet at the same time, we were all flocking to different and mutually incompatible online services, creating NEW borders that were, in many ways, even more forbidding. Of course, not long after this, the Internet came along… but for a while there, we had a real problem. Some people solved it by maintaining multiple expensive dial-up accounts; others just treated it as a new form of exclusionary tribalism and looked down on the denizens of those “other” services.

Dataspace: the final frontier. It’s an essential component of my home — a place that is no place, yet everyplace at once — a world unaffected by the constraints of time and space. It’s my electronic link with friends and publishers, my favorite hangout. Ah, the familiar menus of Dataspace… it’s good to be home!

But there’s one problem, despite all this rhapsodizing. Dataspace isn’t really a homogenous shell of electronic communication unifying the peoples of Earth — it’s a complex hierarchy of layers and microcommunities. There are megasystems, dedicated mail servers, loosely coupled aggregates of local domains, competing protocols and little bulletin boards. There are fast systems that cater to commercial users, slow systems that discourage them and ad hoc networks of radio-linked PCs. There is competition, infighting, politics and even legal interference with communication in and out of some countries (not to mention legal interference with downloading). The idyllic vision of a global electronic village is still far from reality.

Much of the problem lies in the fact that networks, in general, are commercial enterprises… and business, by its very nature, is competitive. Users must choose between bottom-line-oriented corporate giants, even if their motives for going on-line have more to do with unification than competition.

The net effect, so to speak, is a curious form of nationalism that is nearly as insidious as the geopolitical variety. It rarely extends to outright hostility, but it blinds people to other resources, complicates and discourages intercommunity communication, and fosters attitudes that can be described as soft-core bigotry. This is especially odd when you consider that one of the major delights of on-line life is the brain-to-brain contact that renders bigotry obsolete.

This all might sound a little crazy, but consider: If you’re on CompuServe and I’m on GEnie, there is no easy way for us to exchange electronic mail — even though our daily messages intertwine somewhere out there in satellite land. But unless we’re willing to start checking mail on multiple systems every day, we are restricted to whichever network profits from our daily check-in habits. The choice of on-line vendor thus becomes very significant… defining the libraries and other resources available, the flavor of the host interface, and even our range of potential social contacts in the electronic pub. If we don’t like those restrictions, we must maintain a half dozen separate accounts. Online community ranges from serious minded power users to pure technocrazy, and sometimes we need a little of each.

The problem of multiple accounts is only part of it — there’s something much more subtle going on as well. It’s a phenomenon that manifests itself the world over: the belief that “borders” have meaning, that the 49th parallel needs to be guarded by customs agents, that abstract boundaries are worth getting killed over despite the fact that humans are a single species sharing a single ecosystem. Though network communication in any form helps bridge these unfortunate intellectual chasms, the very nature of computer net- working introduces new forms of discrimination (and not just against slow typists or USERS OF ANTIQUE ALL CAPS TERMINALS WHO LOOK LIKE THEY’RE SHOUTING ALL THE TIME).

I use GEnie for my daily mail, and was formerly a resident of CIS. So the Source has always seemed a bit alien, Delphi very alien, and Arpanet and its spinoffs a strange blend of academia and the military. BBSs seem small-time (toys, really) and the dedicated “cause-oriented” networks vaguely cult-like. But to people in the Usenet conferences, big commercial networks seem like expensive hangouts for game-players, downloaders, and general riff-raff; to those in the BBS microculture, the megasystems must appear as do world powers from the perspective of Albania.

There are efforts afoot to change all this. Most visibly, a service called DASnet now exchanges electronic mail between other networks — charging a small message fee that averages about 50 cents apiece. Linking over 20 different electronic communities, DASnet offers a bridge between subcultures, a sort of network embassy that lets you communicate with aliens in your own familiar lingo. Since the company services systems as diverse as MCI mail, The Source, Portal, UUCP, Telex, GEOmail and Japan TWICS, the embassy analogy isn’t all that far off. You can even send fax messages by E-mail, which is not uniike typing Mandarin Chinese on your PC.

It is easy to see why the networks themselves have seldom taken major steps in this direction: communications protocols differ so dramatically that moving back and forth between The Source and Portal is comparable to commuting between Palo Alto and Sydney — vaguely similar lexicography, perhaps… but different semantics, syntax and culture. A direct gateway between the two would mystify the less-agile users and overload both customer service departments. But having DASnet to handle the translation lets each community retain its unique flavor while eliminating its traditional isolation. (And, in an even more complex vein, they are porting ongoing conferences back and forth in addition to user-to-user mail.)

I assume this is only the beginning of the cross-linking process, for only the independently wealthy hackers among us really enjoy signing on to all networks every day. I have already taken steps to create a mini-gateway of my own: packet-radio mail should now be addressed to me as KA8OVA @ WA4ONG… whereupon it is automatically forwarded from Richmond into my GEnie account (WORDY). The need to make such connections will become more and more common as people get seduced away from matter transfer and into network communications — only to discover that, from a modem’s-eye view, whole new walls have suddenly appeared.

But those walls will crumble, inevitably, for the very nature of life in Dataspace implies free communication between brains (no matter where their attached bodies happen to live). The electromagnetic waves that carry our thoughts recognize no borders… and the ones we have created are but temporary artifacts of a young technology.