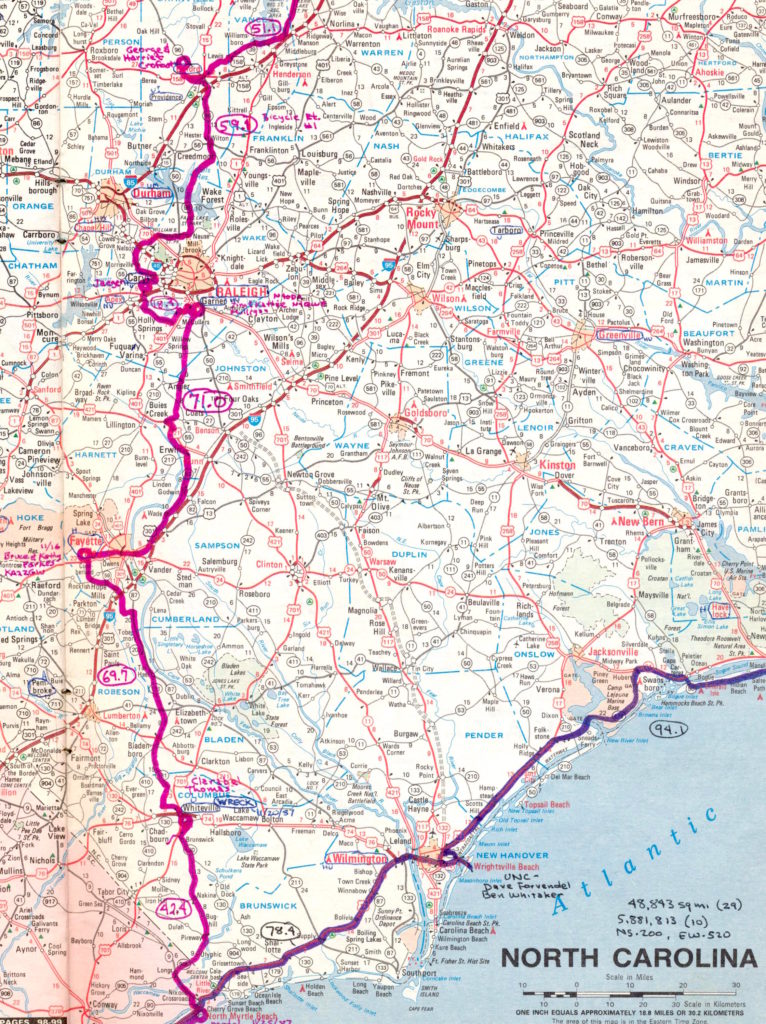 How’d I get into this, anyway? The movie’s over, and still I sit dully switching the cable between the decadence of music video, the two-dimensional world of late-night soap opera, and the hypnotic criminality of religious broadcasting. I miss Max Headroom. Our host family is long since in bed, and a curious restlessness grips me: a week in one place seems like a mortgage, even though the road en route here was exhausting. Late at night, my thoughts turn to fantasies of the next level… some kind of floating substrate for cycling excursions, a blend of stable electronic playground and footloose wandering. I want both gain and bandwidth, and the only way to beat a trade-off like that is to invent new rules and then disregard them.

At 3 AM, nothing is routine. The dispersed bikeload of clutter has the same character as yesteryear, but the data on the screens is new, the ideas behind the connections stranger than ever. Notebook pages speak of future projects; chips in black foam hold megabits. A bizarre recumbent bikeasaurus, much too heavy, is parked on beige carpet, RS-232 cables draped across the frame; my atlas, tattered, lies on the seat. I talked to British Columbia with a whisper of Morse Code on 20 meters tonight, then ran inside giddy and shivering to circle “150 Mile House” and stare at it for a long time. Maps, maps, always the maps…

The visit is especially strange this time, because we pedaled into an unfamiliar place only to find my office. Here it is — the nerve center of the Computing Across America empire, the home of CAABASE, the repository of road trophies, the archive of files. Yet it’s as strange as the ham minister’s country home in Oxford or the little pink plywood cabin on West Chipmunk Lane, for we are to this place as life to a video camera: focused, tracked, and synched — but never truly captured.

Ah yes, video. I write bleary in the basement, cats watching heavy-lidded, MTV flickering on the periphery to tempt me with miniskirts and weirdness. “Every mother’s nightmare, every schoolboy’s dream,” someone sings. Ritual slavery, hot legs, leather seduction, choreographed street violence, strange courtship rituals, caged rockers, Blue Angels, punk sweat, video trickery, exhibitionist beauty, slick visions of stardom — it’s all routine on the screen, reflecting and promoting a confused mythos of safe sex, no drugs, and uninhibited hedonistic decadence while operators stand by to take orders for soft-rock tapes and fake diamonds. Is this the legacy of rock ‘n roll?

En route to VH-1 a while ago, fleeing a singer coiffed and smarmy, I stumbled into the religion channel. An actor was down on his knees, pretending to see the audience and sense their problems, exhorting us all to sow our thousand-dollar seeds and keep on watering them until the manna from heaven shall fall. “Don’t procrastinate!” he cried, quoting something from Ezekiel. “Don’t let the Devil steal this moment — don’t let him keep you from God’s side. CALL NOW, saith the Lord! Pick up the phone and call the number on your screen!”

Operators are standing by…

I watched in awe, thinking of the billions embezzled from simple folk infected with this mind virus. Yes, it’s embezzlement alright, theft of the most insidious kind: spiritual scavengers slip inside people in the name of an image they’re programmed to consider sacred, then take advantage of guilt and ignorance by offering easy answers for a price. A culture raised on fear of the unknown will cling desperately to myth, even if it’s indistinguishable from a commercial. After all, we are what we eat, physically and otherwise.

(I am GORP. A bit nutty, but there are good raisins for this…)

If the world, as someone once said, is indeed a crystallization of our dreams — if Reagan, Star Wars, and encroaching totalitarianism grew from the paranoid fantasies of childhood comic-book fiction — then what kind of future will be created by kids who watch Beyond Thunderdome twenty times and stare at MTV otherwise? Today’s alternatives to sanitary textbooks are bizarre and alluring. Choose, O Confused Youth of the 80’s: will you base your dreams upon the emasculated compromises of curriculum-planning boards… or upon the relentless seduction of video?

Freedom of thought. Yes, I know we live in America and freedom exists in all sorts of dimensions. Our ability to publish, gather, party, campaign, complain, and otherwise express our diverse opinions is second to none. Yet, much more subtly, we are programmed from infancy to expect certain things… to be driven by certain motives… to dream within certain limits. School is not a place of intellectual resources for the curious and alive — it’s a place to forget your interests and strive to meet a standard. Think about it. The very notion of an intellectual standard is offensive: “Hey, you out there on the asymptote: get back here within one standard deviation from the mean, or you’re going to see the principal!”

So here we have millions of intelligent little information sponges, entering first grade only to be squeezed dry over a decade or so and molded into shapes that make good administrative sense. Passions yield to percentiles. Growth is measured in grades. Wit and intuition, those non-numeric attributes of a healthy mind, end up being of little consequence in a system that recognizes only scores.

From all this, you learn that it is more successful to work for approval than to pursue your dreams. You discover that an A is better than an insight. That a promotion is better than an invention. That a stable bottom line is better than risk. And that it’s dangerous to ignore the expectations of people who measure you against what you should be and punish accordingly.

Enough ranting. So here we are in North Carolina. There’s a sort of warm levelness about it, faint echoes of the 60’s just reaching the mainstream south after a decade of filtration. There are still a lot of cigarette smokers here to stink up the permed hair in franchised hot spots — but occasionally, in an incongruous twang, I hear lines like, “I’m in a really laid-back space today.” I miss the surprises and cultural flexibility of the West, but the people here are welcoming — an effect that manifests itself in many ways. I call someone on a local ham repeater and am drawn into conversation with five others, enthusiastically welcomed and invited to use the system facilities. There are smiles on the street, howdies from neighbors, invitations various in the upbeat drawl that marks a high-tech growth area in the borderline South.

Last night we had the traditional cyclists’ pizza with an unusual couple — 1986 Race Across America (RAAM) rider Jim Mulligan and his nutritionist wife. In mutual awe, we sat and talked of the road: he averaged 257 miles a day for 12 days to make the trek from Huntington Beach to Atlantic City. His marathon record is on the order of 500 miles of pedaling without a rest, absolutely incomprehensible to us lazy, laid-back recumbent riders who set out at 10:00 AM on a typical day and start thinking about the hospitality database around teatime. I’m the opposite of a racer; he’s a quintessential one — yet we share the same love for the Other Woman and for the visceral pleasures of sweat and tailwinds.

The ride from Richmond, about 200 miles of fall colors, was a typical four-day cruise of odd encounters and unexpected twists. In McKenney, Virginia, a local hollered, “Hey what is that? Or, um, what was it before ya ran into somethin’? ‘Cause I can see the front end’s all wrapped up around yer windshield there…”

Just north of Dinwiddie, we pulled into a campground, cognizant of a freeze warning. North Face Blue Kazoo sleeping bags aren’t warm enough for us fair-weather campers, but dusk was happening — a sunset of blazing orange highlighted by pond-reflected autumn leaves and a strutting blue heron. “Well, for three dollars extra you can have a cabin,” quoth the lady, and within a few minutes we were residents of West Chipmunk lane, giggling for some reason, calling back to our Richmond friends on 2 meters and cuddling on the bare mattress as breath fogged the windows… ah, the outdoor life.

In South Hill, Virginia, we made friends all afternoon with local hams, reporters, and random bystanders — all of them friendly and laughing. But no invitations could be had, so we finally pedaled in the dark to a motel, our first since Ohio. Why? The maximum-security prison is in nearby Boydton, and a recent escape of six men from death row has left the entire area nervous about strangers. It’s disquieting to be on the receiving end of that attitude… a feeling akin to being falsely accused of theft or asked to trot out a pocketful of ID to guarantee a check at K-Mart.

North Carolina. We approached Oxford, talked-in on the radio by a ham-operating, goat-raising Presbyterian minister who materialized in the database through the League of American Wheelmen hospitality listing. At dusk he and his wife met us on the road, and — delight of delights — tossed our 120-pound trailers in their pickup truck to help us speed to their home.

Freedom! Hills were suddenly a pleasure; acceleration from each stop sign startling in its intensity. So that’s why people travel light on bicycles!

(That little insight hasn’t prevented yet another equipment acquisition this week — now we’re both carrying nifty 10-meter handheld transceivers from AEA in Seattle. The sunspots are coming back, you know… it’s not like we have a choice. On two watts of voice this morning, driving a dipole in the back yard, I spoke with a fellow in the Canary Islands off the west coast of Africa. An addiction to technology and an addiction to cycling, it seems, can only be reconciled through either knee-destruction or a seriously decked-out support vehicle.)

Onandonandon. The south beckons, the west beckons, the road beckons, intelligent friends out there in Dataspace beckon. We cruise the American scene, cynical sometimes, delighted othertimes, sensing the subtle flavors of change that season the land. All it takes is a few miles… a few weeks… and life evolves again. You get used to it. You get SO used to it, in fact, that staying someplace a week makes things seem a little too familiar.

How will it end? Or will it?