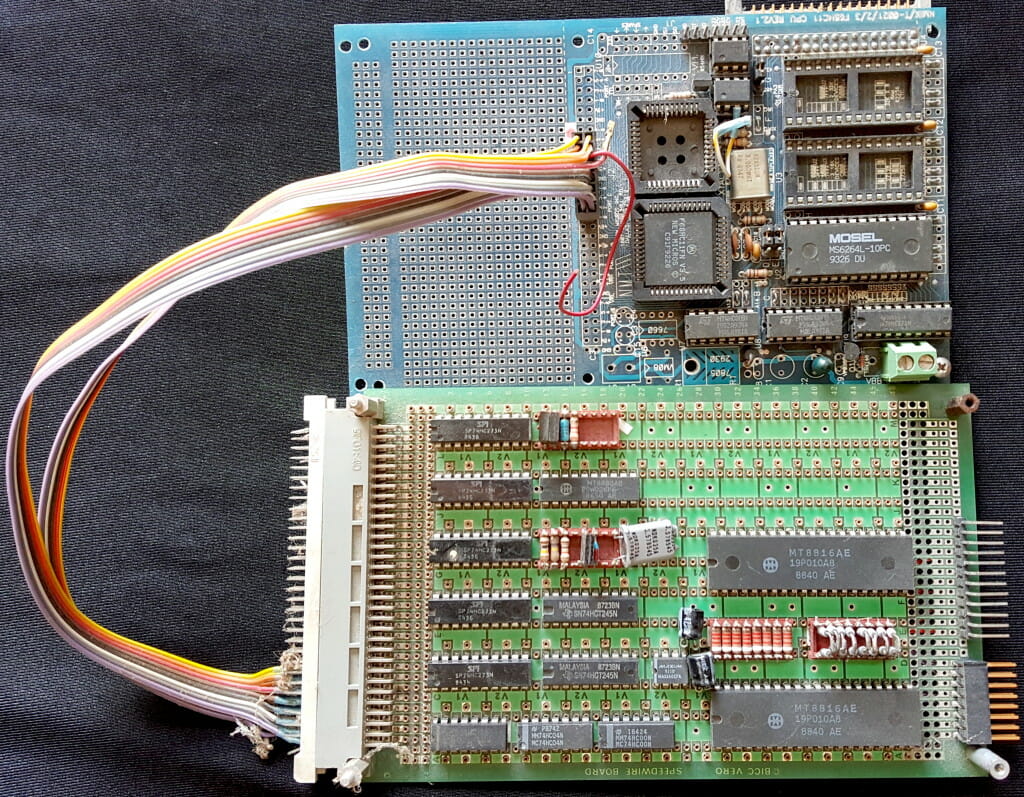 As I mentioned in the previous issue, one of the hot projects currently afoot is a pair of manpacks (though as Jean Polly pointed out in response, now that Faun is part of this project they might better be called personpacks…). Anyway, it’s proving to be a fascinating and challenging part of the system, so I thought I’d elaborate a bit more here.

Basically, the goal is to extend the Microship network to either or both peripatetic humans while also allowing them connectivity with each other. The comm link is flexible and reassignable, with the first one online being a pair of Motorola RNET 9600-baud UHF wireless modems grafted at the modem-disconnect port to a pair of PacComm packet terminal node controllers. This will not prevent the TNCs from using ancient but reliable 1200-baud packet over 2-meter ham radio, but the link to the ship is business band and 8 times the speed. Some interesting technology may be in our hands soon for extremely high-speed communications, but the likely trade-off of bandwidth versus range has encouraged us to provide for three datacomm channels that can be selected on the fly by the pack’s processor.

There’s a surprisingly large amount of I/O on board this thing, necessitating a latching port expansion scheme that gives us 48 output bits and 24 input bits. (We’ll add a 68HC24 to the processor board, then use the bidirectional port C as a bus and four additional output bits to drive and enable a 74HC138 decoder connected to 6 octal latches and 3 tri-state buffers.) The approximate interface requirements below hint at the functionality of the manpack system:

As you can see, there’s a lot going on here, with the FORTH board’s efforts breaking down to a small number of simultaneous tasks. It will watch the chord keyboard and either buffer text into a small notepad or act upon commands (either locally or via DTMF to the ship), echo text and pass incoming messages to the little chest LCD (we’re having doubts about the sanity impact of character-based speech feedback), set up audio routing that lets the pack appear as a remote expander for the on-ship audio crossbar, provide a path for the Mac to log into the ship and connect to any available resource including AppleTalk, and invoke a local security function that will make the pack difficult to steal and easy to track (GPS-stamped packet beacons). There’s also provision for plugging in the Motorola MicroTAC cellphone with modem and using the pack as a gateway to external services.

We have three people working on this now, and they’ve already carved it up into projects and started collecting hardware. I’ll keep you posted on developments!

We acquired some excellent maps of the UCSD campus from the Facilities folks, and they will be passed to DF Crane for scanning into nav chart form. This will allow the Macintosh charting software to show the local campus environment for our Manpack GPS tests.

The video turret team has been making excellent initial headway, getting the shaft-position encoder working and refining a very simple hardware interface. I need to get a color camera soon to make the output more interesting… seeing Alex and Nathan going at the design makes it pretty clear we’ll have a working turret soon. A few minutes ago, I heard a whirr as Alex tested a simple two-chip motor-driver circuit. Looks like they’re going to use the HC11’s on-chip pulse accumulator to track angular motion, also watching the optical limit sensor. They’ll generate pulse-width modulation signals from the CPU to drive the cameras at any speed, based on commands over the ShipNet from the Helm or security/monitor tasks.

In boat news, we are looking seriously at a Stiletto 27 catamaran as the substrate, and I found one in San Antonio, Texas that sounds promising. I’ll fly there next weekend to go for a test sail and crawl around in the hulls, building imaginary systems in my head. This boat is very fast, about 1500 pounds, 14′ beam, and collapsible to 8′ for trailering. The hulls have retractable Lexan canopies that look like aircraft cockpits, and there’s a foam-core rigid deck aft of the mast (with a tramp forward). Since we need self-trailering, one of the questions involves the reasonableness of adding retractable landing gear to the aft crossbeam. We’d also like to be able to stow kayaks somewhere on board, and possibly improve pointing ability by adding a ventilation fence to the surface-piercing centerboard (some Stilettos have put the boards in the hulls, but that seriously eats internal space). More on this after I get back from Texas. We’re also stepping up efforts to sell the Fulmar, which is still sitting in Seattle, and the Libra kayaks are being picked up for storage tomorrow since we’re losing our space at Seaweed Canyon.

Things are getting crazy around here as the projects take root. The academic clock is ticking, a powerful motivator, and I’ve actually had to gear myself up to match the energy level of the students! We disbanded the sensors team since one member left, and are tentatively adding the other (Ino) to the Hub group to focus on three data collection tasks (8 switches, the radiation monitor, and two temp sensors). The rest of the Hub project is quite ambitious enough — Harrison and James have plenty to do designing network, security, data collection, host interface, and monitor functions.

Those are the headlines… tonight Faun is desktop-publishing and I’m going to work on a sponsorship proposal and a project budget… the fun never ends at Nomadic Research Labs!