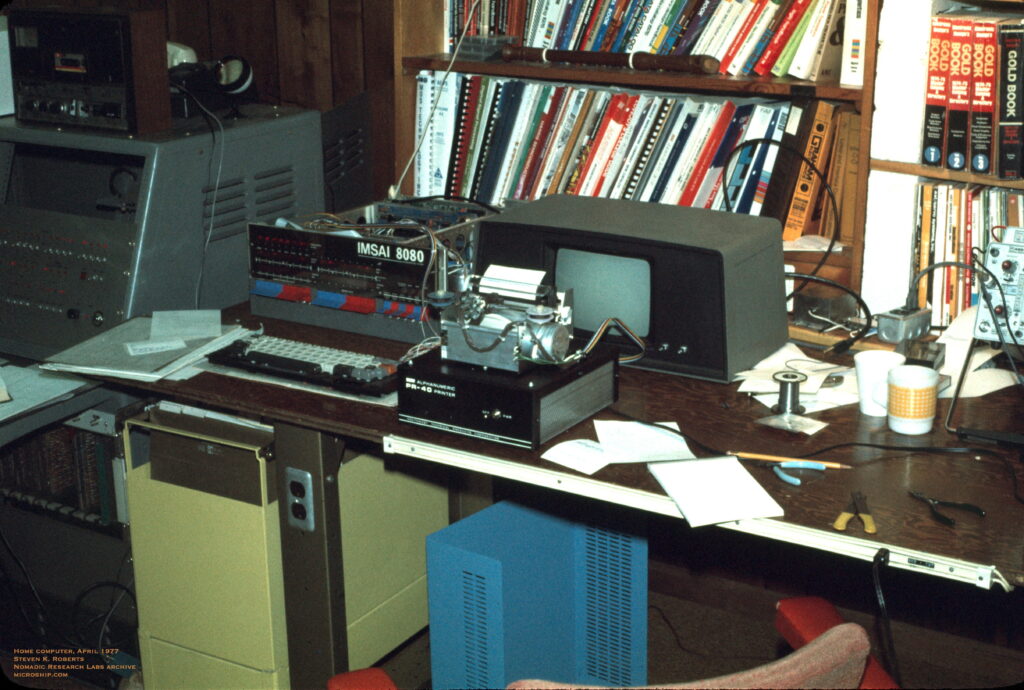 This article in a local business paper caught a rare glimpse of Cybertronics around the beginning of its time in the Bluegrass Industrial Park east of Louisville… freshly escaped from a 2-bedroom apartment. I was 24, and the little business that had been supporting my computer obsession with mail-order parts and computer sales was turning into an engineering firm. The April 1977 photo above shows development in progress on a project for Honeywell (environmental control and energy management system for the University of Louisville campus).

The tall, bearded young man, dressed in jeans and a casual shirt, is talking about the growth of the company he built.

“We’ve had a linear growth rate with just a few exponential components in the cash flow rate,” he says, apparently understanding what he’s talking about.

What Steven Roberts, Cybertronics’ president, is really saying is that the company’s growth has been meteoric. He started Cybertronics three and a half years ago with $100, selling computer parts from his bedroom. He grossed $11,000 the first year.

The second year he began serving as a distributor for several small home computer companies while building, through word of mouth, the parts business: he grossed $24,000.

Last year, Cybertronics, which has four employees, added industrial custom programming and engineering to its line of business and grossed $92,000.

“Our major direction in the future will be industrial and custom work, which means we’ll sell the brainpower to go with the systems other people sell,” Mr. Roberts said.

Cybertronics’ first custom job was for Louisville’s Hodges X-ray, Inc. Mr. Roberts designed and built a program board to run an X-ray machine, and Hodges now has the boards in production.

Working in the long, narrow backoffice warehouse of Cybertronic’s Bluegrass Industrial Park headquarters, Mr. Roberts then designed a unit to run glass grinders for Corning Glass. The interfaces he built — now used in two Corning operations — returned to the glass manufacturer 92 per cent of its computer time, time that was spent previously controlling the grinders.

Most recently, Cybertronics worked for the large computer manufacturer, Honeywell. Honeywell received a contract to build a climate-control system for the University of Louisville but learned after the contract was awarded that its equipment did not meet specifications. Cybertronics built a unit which, when attached to the main computer, brought Honeywell’s system to specifications.

The burgeoning home computer business — which many see as an industry whose growth will far surpass the recent heyday surges in pocket calculators and digital watches — will bring accelerated parts and component sales to Cybertronics, Mr. Roberts said. It may also lead the company into manufacturing.

“We’re going to start, maybe in six months, by building two or three products — the first couple will be board units that people who have home or small business computers can add their equipment, expanding its capabilities. These products will allow us to build up a production facility, then we’ll decide whether to begin producing a home computer unit of our own,” Mr. Roberts said.

Already on the Cybertronics drawing board is a typewriter-sized computer and keyboard that can be plugged into a television for read-out purposes and attached to a cassette tape recorder so cassettes could be used for storage of data.

The home computer business took off with the invention of microprocessors. If you take a staple and bend it in the middle so it forms a square you’ve got something a little larger than a microprocessor. These little chips, made of silicon, have the processing power of early IBM computers that filled whole rooms.

A home computer, which can help with taxes and bookkeeping and provide recreation through a number of computer games, can now be bought for as little as $200. Larger models, with all the capabilities a small business would need, are available for as little as $5,000. It is estimated that prices will drop dramatically in the near future because of new breakthroughs and greater competition as retailers like Sears enter the field.

A sign of the growing popularity of these units is the rise of franchised computer shops, one of which opened in Louisville recently. Computerland, according to manager John Stork, will offer hobby and business computers through 60 stores by the end of this year. The Louisville store, which offers a line of small computers and accessories, is the chain’s sixth store and its first outside of a large city.

Mr. Roberts at Cybertronics said the anticipated boom in small computers will help his company’s parts and service department, and its sales department to an extent — although he admits that it will be difficult for him to beat the prices a franchise operation like Computerland can offer.