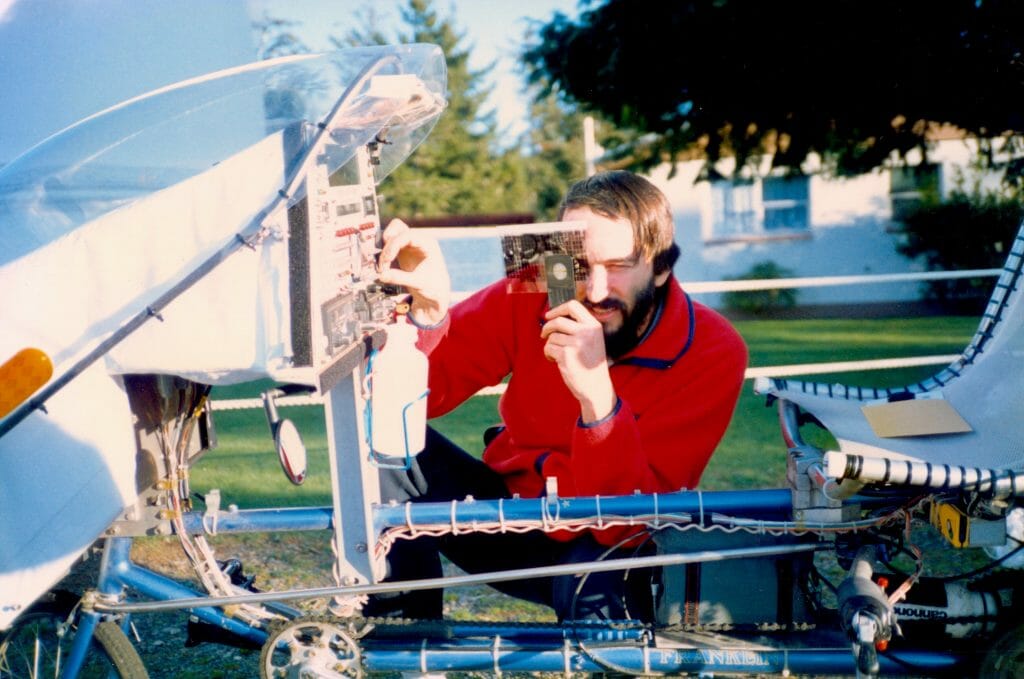 Three decades after this photo, carrying hundreds of gigabytes on my key ring and picking up 8-terabyte drives on Amazon for a the cost of dinner-for-two in a tourist town, it is really hard to remember a time before PDFs. But in 1987 there was a big challenge when riding a computerized bicycle still under active development: how could I carry heavy IC data books, product literature, system documentation, language manuals, atlases, maps, and other reference material? PDF was yet 6 years away (introduced on June 15, 1993), and there would not have been enough file storage for them anyway. What to do?

The solution was non-obvious and involved a fair bit of up-front effort, but ended up being remarkably effective… the “Aquarium of Microfiche.” I acquired a hand-held 20X viewer, and had everything important converted to a stack of 4×6-inch films that I carried in a pouch for years. This article tells the story…

I first sensed the problem on Bainbridge Island, Washington. I was poised for departure, psyched and eager to hit the road.

The bike was ready: handlebar keyboard working smoothly, derailleurs shifting with soft snicks, packs bulging with the tightly compressed furnishings of my rolling home. I scanned the sea of detritus from which this latest revision of the system had emerged, making sure I had forgotten nothing.

My gaze landed on a stack of manuals and I froze. Oh no… I was about to pedal around America on a bikeful of computers without documentation! There was software I had never used. There were whole subsystems I had not yet interfaced, like packet radio — a marriage of three processors, custom programs, complex protocols, and a new Yaesu transceiver. I had a static-free bag of CMOS chips for future projects — but no pinout or application data. I was facing a big problem, for all my life I had taken shelves full of manuals for granted… never thinking twice when reaching for The Book.

I stared at the stuff for awhile, mentally paring it down to a minimal stack of paper about ten inches high that absolutely had to go with me. And this assumed that I would be welcome to use system manufacturers’ toll free help lines for routine questions about all the rest — becoming one of those annoying customers who pick up the phone before reading the manual. (“RTFM!”)

Something had to be done.

I fired up our hosts’ photocopier and began making quick-reference guides — trying to capture summary information about every system in the bike. But I quickly discovered that this only works for systems I already knew well, reminding me of command syntax, perhaps, but not putting the whole operation in context. The quick-reference approach worked fine for familiar programs and my own designs, but was next to useless for untried commercial software (and downright pointless for board or chip level hardware).

Let’s see. I didn’t have time to key it all onto disk, nor could I con someone into banging out a CD-ROM on short notice. Maggie, my partner, curtly rejected the idea of carrying all the manuals on her bike, and the thought of memorizing everything was absurd. So… I acquired a miniature microfiche viewer, had all the books reduced onto 4X6 film, and pedaled south with the entire pile of essential documentation compressed into a shirt pocket sized envelope. Voila!

Microfiche doesn’t sound very whiz-bang to silicon junkies, I know, but it’s an effective solution to the portable documentation problem. Granted, I wouldn’t want to sit by the campfire and spend an evening reading fine print through a 20X eyepiece, but then, that’s not how most of us use documentation. It’s a reference tool, a device for solving problems — the kind of resource that’s critical enough to make a little discomfort tolerable, even welcome now and then. Many times in campgrounds and spare bedrooms, I have pulled out my worn little packet of system manuals and tracked down something I thought was a system bug.

So if you’re on the road or are otherwise seriously pressed for space, I can recommend this method of building a library of reference material. Let’s look at the details.

Your first resource is a local microfilming shop. In Seattle, I worked with Alpha Information Management; they recommend Trinity in the Bay Area. Prices vary; Alpha quotes a typical cost of $25 to reduce 300 documents to a fiche, with significant price breaks beyond that minimum walk-in charge. Duplicate sets are cheap, so there is little expense involved in generating off site backups (I did so for obvious reasons; I often get rained on).

Traditional microfiche viewers that you see in auto parts stores are large machines with rear-projection screens, which hardly offer any advantages over a box of paper manuals. But there are finally some tiny ones that depend or available light (including your Mini-Maglite, if you’re out in the middle of nowhere). Made by Keyan, pocket viewers range from $20 to $120, depending upon magnification and quality. Mine is at the high end of this range, and is called the “Keyan 20X COM Viewer.” (If you use one of these, don’t hesitate to peel off the yellow guide line on the back of the lens; it’s only useful for tabular data.)

The compression ratio is incredible, with an information packing density that rivals 3.5″ disks. Using maximum reduction, Alpha can fit 420 8.5 X 11″ pages on a single 4 X 6″ fiche. Lesser reductions are available for easier reading: my Motorola CMOS data manual has been reduced to just under two fiches of 325 pages each. A title bar across the top can be read with the naked eye, and, well, the whole system works so smoothly that there’s not much more to say.

Except for one problem… copyright. That old bugaboo. Properly intended to prevent unauthorized reuse of printed matter, the copyright laws are general enough to stymie personal duplication of information — to the point that some copy shops won’t touch maps and most microfilming houses won’t duplicate anything without a release. If you’re contemplating conversion of your documentation to this form, I suggest contacting the manufacturer and requesting written permission. You might also suggest that they offer microfiched manuals as an alternative for users whose shelves are already cluttered with expensive, seldom opened binders.

It seems a sort of heresy for an electronic information junkie like me to promote data storage on film. But technologies should always be appropriate to the application. I would never even consider microfiching my bicycle’s logic and wiring diagrams; they evolve far too quickly. Pencil and paper work best for those. Nor would I fiche my hospitality database. which is capably maintained and cross-referenced by HP’s “Executive Card Manager.” But how about the yellow pages of the whole United States? It’s already right there on DIALOG, updated quarterly, accessible via modem. And CD-ROM is pure magic for all sorts of machine readable things, but it requires an expensive drive, the electricity to go with it, and a huge setup cost per disk. But there’s a niche for the fiche…

There’s another interesting application of microfiche I’ve been exploring, by the way — one that’s especially well suited to my lifestyle. One of the most irritating problems with open ended bicycle travel is the difficulty in obtaining appropriate maps, for the ones from AAA and gas stations only show the roads where all the cars are. There’s no topographic data, no detail, no useful blow ups of towns, rendering the process of navigation on back roads a shaky thing of local advice and guesswork, aided by my trusty Silva compass. The only way around it has been to plan far enough ahead to order county maps from a state agency, something I have rarely done.

But DeLorme Mapping Company is now publishing detailed atlases of individual states… and Color Microimaging Corporation has a process for non-paged reduction of full color documents onto fiche. A marriage of the two technologies, still in the head scratching stage, could solve the whole problem with a pocket-sized microatlas of the U.S., packaged with a tiny viewer in a waterproof case. Now. what traveler wouldn’t want one of those?

Yes, despite the dusty reputation of those old non-electronic information storage methods, there’s a lot of life left in microfiche. If your arms are getting tired from lugging around manuals, check it out.