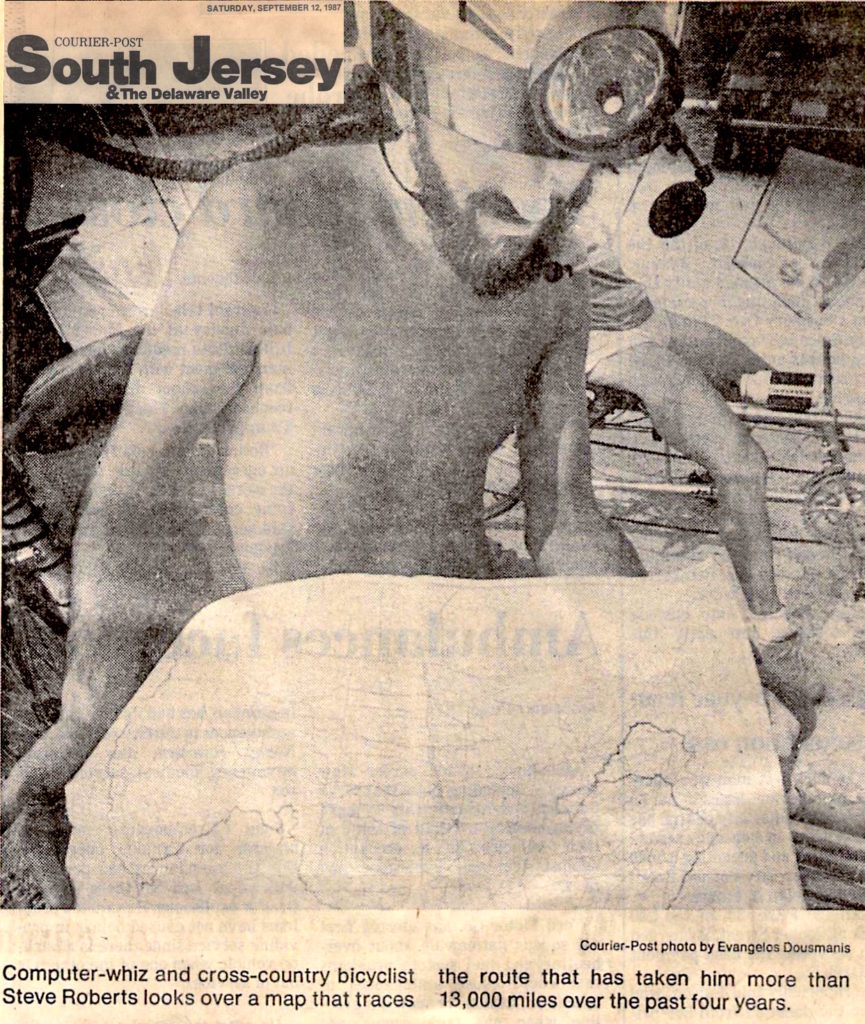 Our trek down the East Coast included a stop to visit the publisher that was working on my book, then we pressed on through the Pine Barrens and out to the Jersey Shore… then on to Florida. My tales of this epoch are in the Notes from the East and Junkyards and Tollbridges stories.

MEDFORD — Some bicyclists mount a Cateye solar speedometer-odometer on their handlebars and think they’ve gone high-tech.

The 35-year-old free-lance writer and computer whiz does have a Cateye on his recumbent bicycle, an unorthodox machine that lets the rider recline in a chairlike seat and pedal horizontally.

But the other accessories Roberts added have turned the recumbent into a computerized, solar-powered mobile office on which he has traveled more than 13,000 miles in the past four years, writing and selling magazine articles and publishing his own Journal of High Treknowledgy as he goes.

He and traveling companion Maggie Victor, who rides her own customized recumbent, yesterday visited the Medford offices of Learned Information, publisher of a book Roberts wrote of his nationwide journey. Computing Across America will be published this fall.

The well-paid owner of his own Ohio computer consulting company four years ago, Roberts dropped the comfortable life to become one of the nation’s most foot-loose journalists.

“I’d done a lot of free-lance writing over the years… and I just thought, ‘Wait a minute, I’m a free-lance writer and supposedly so free. So why am I stuck in Columbus, Ohio,'” the lanky native Kentuckian said.

“I got more and more irritated by that question and finally decided I should take all of my passions and roll them into one lifestyle.”

After an “epic garage sale” of most worldly possessions, off he rode on a custom-built, 54-gear touring machine.

He chose a recumbent because “traditional bikes are not user-friendly at all. This is 260 pounds of machine and I’ve never had to walk it up a hill.”

Most inspiring has been touring in the West, he said. “I just kind of like the wildness of it out there, and the space.”

Roberts carries camping equipment but said “we usually meet people and stay with them. That’s always the first choice. That’s always the most interesting.” His income has slipped to less than half the $50,000 a year in computer company earnings, Roberts said. “But I’m richer and happier,” he added.

At his fingertips are handlebar-mounted computer keypads on which he types notes as he rides. He faces a home-made control panel with a computer display screen, ham and CB radios, even an altimeter.

Another on-board computer system allows Roberts to send and receive electronic mail by ham radio through an orbiting satellite, from a campground or even while pedaling.

A security system connected to a voice synthesizer issues playful spoken warnings if the bicycle is touched while Roberts is away. “You are being monitored by a starship. Do not touch or you will be vaporized,” the bike may say while activating an electronic pager Roberts carries with him.

The synthesizer also translates computer data such as business files or address lists from text into speech, briefing Roberts aloud as he rolls along.

Packed into a luggage trailer along with his tent is a powerful Hewlett-Packard portable computer for longer writing tasks. Completed copy is transmitted to an office he maintains in California by modem hookup to the nearest telephone receiver.

Solar panels the size of serving trays are mounted on the front and rear of the bike, charging batteries that run the computer equipment as well as headlights and horns.

Roberts said he has no idea when or where the end of his road will be. “If you think too much about where you’re going you lose respect for where you are,” he said.

His “rough plan” is to cross the country again, arriving in the Rockies sometime next spring.

Companion Victor, an Ohioan who quit a social service job to join Roberts, has been along for the last three or four thousand miles. They met over the summer when Roberts returned to Columbus to finish his book and upgrade his bike.

“We met in a bar one night and a couple of weeks later he said would you like to go for a bike ride,” she said.