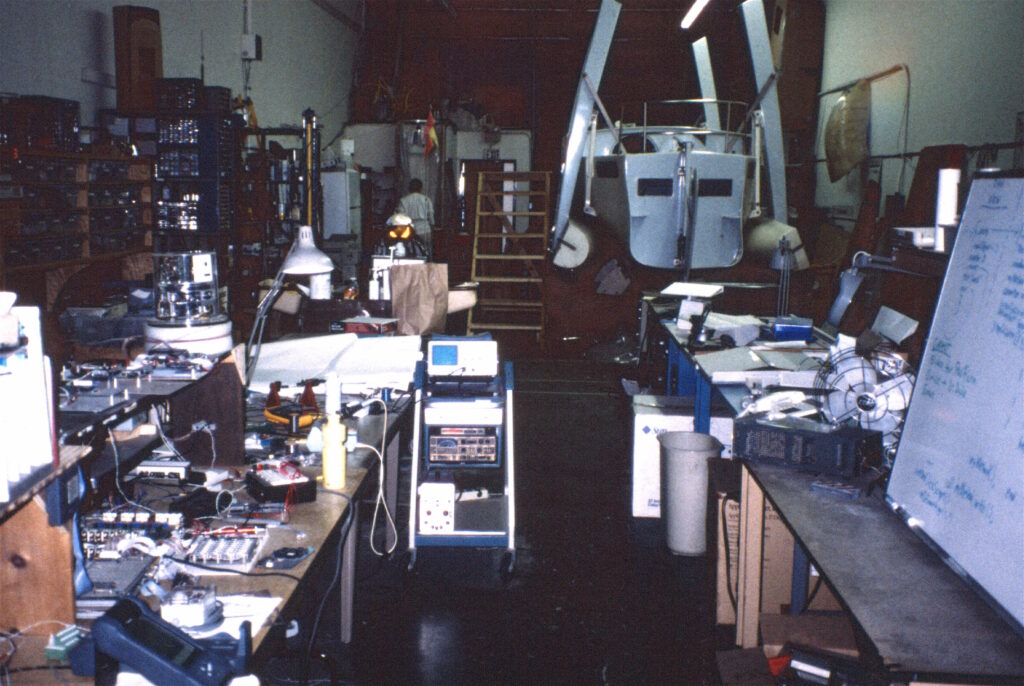 Ahhhhhh. This is the official close of a very long and frustrating chapter in the Microship project — the quest for and implementation of the lab. This all belongs in the overhead category, but it is so critical to the success of the project that it has occupied center stage for quite a while.

In our last update, we had just hauled everything from San Diego and dumped it into the 2400 square-foot space sponsored by Apple. In the two weeks since, we’ve unpacked, acquired lab furniture, built the essential life/work-support facilities, and settled in. Bay Alarm is wrapping up the installation of a monitored multi-zone security system with radio backup, the espresso machine hisses away my circadian torpor, and the World’s Most Expensive Boom Box is currently issuing an acoustical retrospective that conjures images of ancient rock concerts. Those are the headlines.

Now that the lab is in place, I’m actually turning my attention back to the project itself… even filling the air with the suggestive smells of solder, sawed pine, and adhesives. The first project was a pair of unclear-on-the-concept skateboards: dollies with orthogonal casters ($2 each from RSurplus!) that can be slipped under the Microship’s trailer wheels to move it laterally in the lab, allowing one ama to be unfolded at a time. Alas, the existing rustbucket trailer has inflexible ama-saddles, so we have yet to see this baby spread her wings. I’m told she looks a bit like a Klingon Battle Cruiser…

With the project back on track, we face an interesting management challenge. The ol’ TO-DO list is a good start, listing specific tasks of current relevance, but trying to expand that to encompass the whole ship might yield a monolithic and essentially useless document that would leave us mired in detail. Enter the tools of project managers… for the past few days I’ve been making PERT charts of subprojects, which not only help us visualize all the dependencies and priorities, but also make lovely office wallpaper. I color boxes yellow when done, and the whole affair gives such an impression of Deep Organization that I think it might actually be working. (Either that, or it’s a grand and satisfying illusion, which is still not a bad thing as long as it motivates.)

In any case, we now have pretty pictures that represent the whole project at multiple levels of magnification… at some point, when our Web server is unfrozen and moved to a new site, we might hafta export some of these PERT graphics for public amusement. After all, that’s the spirit of the WWW… publish something because you CAN. 😉

Again, ahhhhh. As any old-time hacker knows, there’s something about the smells of solder and coffee that are inextricably linked — evoking layered memories of epic all-nighters, the magic crackle of childhood radio projects, the endearing quirks of early TTL, the satisfying snick of relays, the warm paternal glow of dusty hard-driven finals, the whirrrrr-clack of a Gardner-Denver wirewrap gun against a backdrop of Pink Floyd, the elegance of laced cables, and yes, even the incomprehensible integration of shoulder-to-shoulder PLCCs. All of this is far more engaging to the senses than the endless rearranging of bits on disk that constitutes programming, even though hardware, to most, has become but a lowly infrastructure for software, at best unobtrusive and forgotten.

In this spirit, Dave Wright and I pulled a late one last night, latte-fueled and curious, biting off a small project scaled to a single evening, yet occupying a prominent spot on the A/V Subsystem Subproject PERT chart. This involved the reverse-engineering and characterization of the business end of a submarine-sniffing sonobuoy, to wit, a hydrophone. On the Microship, this will occupy one of the audio crossbar channels, allowing easy pickup and distribution of interesting sounds from Down There.

These disposable techno-marvels are interesting, and represent your tax dollars at work. When the buoy is tossed from a P-3 Orion, it hits the water, flooding an open saltwater battery and immediately generating about 20 volts. This burns out a resistor that mechanically separates, allowing two sharp points to pierce compressed-air cartridges… thus inflating the olive-drab (not dark blue) antenna. Meanwhile, the hydrophone and its linked preamplifier begin sinking to one of two settable depths, depending on a lever that blocks the unwinding of an additional coil of wire. The bottom end of all this is a LONG coil wrapped around rubber tubing, with a pop-open plastic disk near the sensor. This decouples the unit from wave motion, reducing noise. Audio is current-modulated up the two-wire unshielded line, and transmitted continuously until a timer circuit trips, causing the buoy to sink in some fashion we were unable to determine.

Our task, simply, was to excise the hydrophone and its preamp, figure out the required voltage and polarity, and determine the best way to extract a 1V peak-peak audio signal. A few scraps of paper, mutterings, signal-tracings, scope probings, and discarded theories later, we had it — 12V at a few mils, with a series 100-ohm resistor on the low side across which is developed an adequate signal. We suspended the unit in our hydrophone test tank (a glass of water), and listened to it on the stereo. Ah, technology.

On a roll, we quickly turned our attention to a Si-tex SJ-1 LORAN-C unit that I got in partial trade for a boat-rewiring project in Florida. Once we repaired a bad antenna connection and puzzled through the programming and initialization procedures, we mounted it on a discarded Motel-6 housekeeper’s cart and rolled it across the parking lot… happily tracked by LOPs and derived Lat/Lon data. Damn. Ain’t technology wonderful?

Finally, it’s time to begin the rigging and initial non-electronic outfitting of the ship. Suggestions and pointers to key Bay Area boat people have been arriving, and next week, after MacWorld, we’re off to Sausalito to make the rounds… and do a Fulmar test sail for a possible buyer. We’re keeping fingers figuratively crossed on all counts, and will keep you posted on relevant details.

And it’s GREAT to be underway at last!