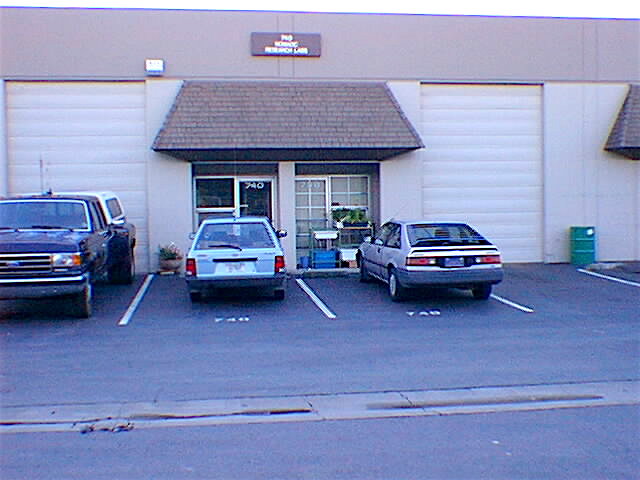 (NOTE: This issue is being cross-posted to the invitation-only Microship Status mailing list for frequent technical updates and the technomads listserv… as well as being archived as usual on our web site. I rarely cross-post these, and humbly apologize to anyone receiving two copies! But this issue contains the news of our return to Silicon Valley, and it’s time to let our friends know we’re here… and alas, I know of no list-management software smart enough to prevent duplications, especially since one is handled internally by Eudora and the other by a distant listserv at UCSD.)

We’re back! If you’ve been following these reports, you may have begun wondering as the weeks passed since our 11/3 update. We were on the road in Florida then, halfway through a 10,000-mile speaking tour, and thus had a pretty good excuse for minimal progress on the Microship (which is, after all, the official topic of the Microship Status Report series).

But while we were happily gobbling diesel enroute up the East Coast in the Mothership, freezing in Maine, fighting our way past Teamsters in downtown Boston, and dashing madly through snow and violent crosswinds on a 6-day, 3,100-mile marathon drive on I-80 to San Francisco — things have been happening behind the scenes that will radically change the flavor of the Microship project’s next two years.

The Project Finds A New Home!

In Issue #89, I opened with this rather bleak comment: “We are now halfway through the lab-relocation — we’ve moved out, but don’t know what we’re moving INTO just yet.” The homeless lab spent a few months boxed and crammed in a self-storage facility in La Jolla, a hundred yards from where both trimarans sat collecting fallen leaves, dirt, and UV rays. This was getting distinctly depressing, but where to find 2,400 square feet of ground-level, secure workspace with a 14′ roll-up door?

Well, I’m delighted to report that we found just that… in Santa Clara… and I’m sitting in it right now!

More accurately, Apple Computer found it for us… and sponsored the lease as well. This deal, which has been percolating for months, can be loosely characterized as a consulting relationship — our Macintosh-FORTH networking, sealed packaging, wireless wearable applications, and interface expansion hacks are all available to Apple along with the PR benefits of the project (that part’s easy… we prefer the Mac over Wintel, and will happily regale anyone who will listen with the countless reasons why).

And so, as the speaking tour drew to a close with the DECUS gig in San Francisco, we dropped the trailer with BEHEMOTH in the new lab and headed for San Diego one last time. With the help of Lonnie Gamble (driving the U-Haul truck with Fulmar in tow) and Kevin Hardy (loadmaster extraordinaire), we put everything on wheels, returning a few days later with everything we own. The scary part, of course, was towing Hogfish (the original endearing name of the Microship-to-be). The trailer that was cobbled together in 1983 for this 3,000-pound boat is less robust by far than the one under my 260-pound Fulmar, and we could grab the bow and waggle it from side to side with disturbing ease. This called for a bit of surgery…

Gingerly, I towed the ship from the storage unit to Mel’s Welding in Vista, followed by Lonnie and Faun. Via the Motorola GMRS handhelds, they periodically reassured me that things looked OK “but it sure does move around a lot!” At the welding shop, Bill looked it over carefully, expressed amazement that it had gotten that far without scattering fiberglass bits all over I-5, and spent the next day adding preloaded trusses, capturing the bow in a rubber roller, rebuilding the bearings, and sending us at last on our way with advice to junk it and acquire a new one at the earliest opportunity. This one has never had a VIN or been registered, and is held together by rust and ancient incantations… but it served its purpose.

Our unlikely 125-foot procession plunged through the Saturday night traffic of Hell-A and up I-5, rolling at last into our new parking lot in Silicon Valley (fortunately on a Sunday… there are serious parking skirmishes among the neighbors during the week). We were joined by Dan Burdick, spent a few hours reluctantly undoing Kevin’s packing-density optimization, then used the U-Haul to rescue a load of doomed furniture from approaching bulldozers… saving, in the true spirit of Silicon Valley obtanium, a bundle in shelving, workbench, table, carpet, and whiteboard expenses.

And so… here we are. The reality has barely sunk in. We have a front office occupied by Faun, her hydroponic garden, and the whole business side of this operation. Atop the office is a mezzanine, which must surely become a lounging area for the epic all-nighters that lie ahead. That cushy heated region is carved out of a 24×100-foot high-ceilinged, fluorescent-lit, concrete-floored industrial space — with the big roll-up door adjacent to the office. That leaves the back forty, so to speak, as the lab… and it now contains the Microship, the Fulmar, BEHEMOTH, a hundred or so boxes I haven’t yet unpacked, electronics lab, computers, a carpeted office corner for me, the inventory zone, dirty shop area, white/black/cork boards, and enough space at last to turn all these technomadic dreams into reality.
Here we go.

Where To From Here?

Now that the major distraction of finding workspace is at last behind us, we can get back to work. I’ve unpacked the network components, started the new TO-DO list, installed a security system, laid the groundwork for our new Net connections (ISDN I think…), and identified the first physical projects associated with the boat itself (a dolly to move it laterally to allow ama deployment, hoists to lift the rigging to the ceiling, stairs to simplify access, interior lighting and ventilation, a thorough cleaning, and… um… the dreaded parking-lot test). These reports should once again come frequently, and will return to more focused technical content as our recent efforts in moving, speaking, driving, and visiting segue into hacking, rigging, programming, and packaging.