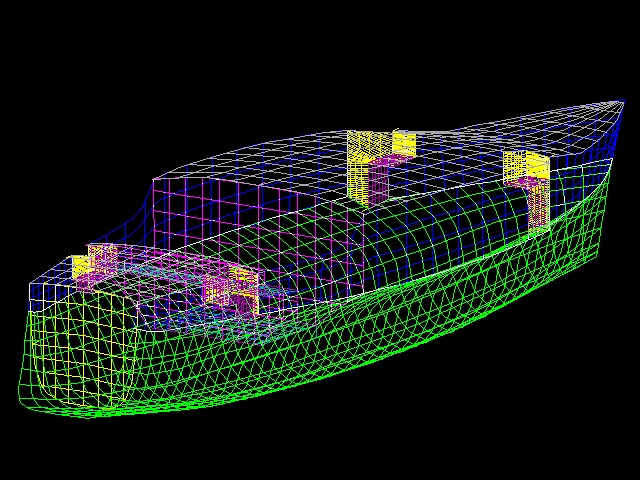 This is starting to look like a shipyard! Last week, shortly after posting #93 of this series, I called John Marples in Port Orchard, WA (near Seattle) and asked him somewhat offhandedly if he’d like to fly down for a brainstorming session on the boat. John is a multihull marine architect with lots of designs to his credit, and has been a friendly voice on the phone at various times during this project — and he designed the hulls of our Fulmar-19 micro-tri. We visited him last year… current work in progress is an RV-6 homebuilt aluminum airplane, flawless.

Anyway, the key critical-path step in getting the Microship wet for the first time is a set of sketches and dimensions that we can hand to riggers and glassers… and the key conceptual input is coming from Gino Morrelli, John Marples, and possibly, Jim Antrim. (This will be interesting, by the way: multihull design is a dynamic field with a small number of highly visible designers and an approximately equal number of philosophies, all of which, presumably, evolve over time as successes and failures are interpreted. Inevitably, there are passionate differences of opinion about a few things!)

John agreed to fly down Thursday and Friday of this week, but insisted on one minor condition: so that he doesn’t spend his time in drudgery, we are to complete one task first… the extraction of enough 3D data points to construct a meaningful set of hull lines.

Whooo. An *action* item. I spent a few hours hacking the trailer ama-supports and rendering them convertable to free one of the floats; then, a-quiver with anticipation and with the assistance of Dan Yang (one of our former students from UCSD), Faun and I cleared the nutrition-management and inventory areas, bolted some U-bolts to the starboard lab wall, ratchet-strapped the boat to them to avoid tipping, and ever-so gingerly unfolded the port crossbeams. Smooooth…. We slid our new motorized drafting table under the ama and used it as a leveling jack…

And there she sat, in half her glory, looking, as predicted, like a Klingon battlecruiser (and not terribly unlike an F-31, though much more imposing somehow). Nice curves… and surprisingly BIG. We walked around oohing and aahing for awhile, parking at last on the mezzanine to ponder the enormity of it all…

Time was a-wasting, though, so our next step was to determine how, exactly, one “de-lofts” a boat. I mean, here’s a ship, somewhat level, we hope… do we swing a plumb bob from hundreds of random points and write down string length (Z) and floor coordinates (X and Y)? Do we use a scanning laser to make a grid on the hull from which we take measurements? Do we make bulkhead models of cardboard, using a tick stick and wooden frame? Do we take a REALLY accurate surveyor-grade differential GPS and stick it to various places, recording lat/long/elevation? Do we lower it with a crane at various depths into a swimming pool, freeze it, then extract the boat and trace the surface? Do we rent an interferometer? Extract it optically?

This made for an interesting brainstorming session with David Berkstresser and Dave Wright one night, and a bit of further refinement with the former led to the process which is now about half complete.

I dropped a plumb bob from bow and stern and snapped a chalkline for centerline yesterday, then David B. showed up this morning in the groggy pre-latte phase and noisily dragged in a pile of Unistrut and scrap material from his van. Before long we had caffeinated ourselves and created a masking tape grid on the floor, consisting of the centerline, a second line offset 8 feet, and 9 perpendiculars — all ticked off at 1-foot intervals. We then built the conceptual opposite of a plumb bob (a bum plob), consisting of a levelable base, a vertical steel post of adjustable length, and a horizontal “probe” consisting of an aluminum point with a notch to pass the calibration device (the plumb bob). A hole in the base carries an adjustable aluminum pointer, and when the unit is all tweaked for a given height, the two points are on the same exact vertical line.

Given that, it became a fairly simple matter to extract points from the hull at selected intervals, simply aligning the bottom pointer to one of our nine measured Y-axis lines, sliding the whole bum plob toward centerline until the probe touches the hull, then marking the intersection of the pointer and the Y-line. Knowing the current height of the probe (which we increased at 4″ intervals), this yields rather accurate 3-D coordinates for each point… and it’s a lot FASTER, since we don’t have to wait for a Foucault pendulum to stop swinging.

Once Faun and I finish all the points (tomorrow), we’ll transfer all the coordinate sets to a big piece of paper and hand it to David, who will key them into AutoCAD, generate a mesh, mirror it to create the full hull, and add whatever initial detailing we need to create a finished drawing (and yes, it will be on our Web site!). A plot of this should be ready for John when he arrives Thursday.

With all this, there has been no electronic activity this week — our first Really Major Objective is to get the ship sailing, and this is Step 1!

Finally, I want to solicit advice and pointers to software tools. As some of you know, this Microship Status list has been small and invitation-only for the past two years, though we do normally archive the postings to our web site (still frozen and running as a copy at UCSD until we figure out where to put our server). The list of about 150 subscribers has been handled by a simple nicknames function in Eudora.

But there’s also the BIG list (Nomadness) which has thousands of subscribers plus various reflectors, and operates as a listserv on a UCSD server. I post to this rarely, and every time I do I get to spend the next few hours being list admin, chasing bouncies. Ironically, Nomadness began exactly like this list — a sorta-weekly, technically-detailed series for friends and interested BEHEMOTH-watchers.

The crazy thing is that most of those people don’t even know we’re back in Silicon Valley yet, while you folks (sponsors and friends, mostly), get all the gory details of bum plobs and hydrophone hacks.

I’d like to consolidate the two and have one weekly posting, eliminating redundancy and further, uh, simplifying my life. Anyone know a quick, manageable, and effective mailing-list tool that I can run here on the Mac? I like the concept of a special list for special folks, but there are a lot of special folks over there too, and they’ve fallen through the cracks. Besides, with the big list, all I have to do is mention a technical question and I get a dozen suggestions — it’s rife with engineers.

So with the understanding that I may be opening a can o’ worms here, I want to post the next Microship Status issue to a few thousand people… it should be a fun one anyway.