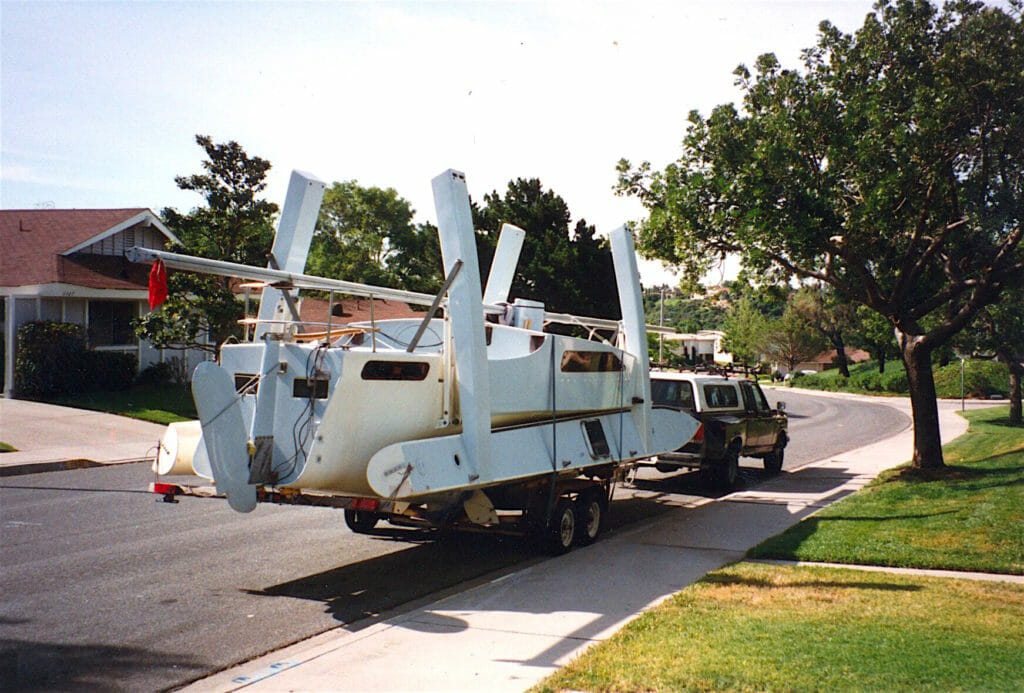 This will be a quick update, folks — we’re on the eve of departure for a week-long cruise around Catalina with our friends Lonnie and Sarah in a Catalina 27 monomaran. True to form, we have not yet begun to pack… tomorrow will be devoted to provisioning and putting out all the fires I can before heading out to sea.

Ah yes, fires. Big ones this time. Our lab at UCSD is going away (officially in 10 days, says the terse memo), though of course we’re doing what we can to get that extended to late summer so there will be time to move out in something approaching an organized fashion. Move where, you ask? Heck, I dunno. That’s the purpose of the 3-week road trip starting July 10 — we’re heading up the coast to visit three universities, two corporations, one national laboratory, and even a rental site or two. The quest is for a new Microship lab, and we hope to find another win-win relationship somewhere… Out There…

Holler NOW if you have any ideas!

Project Updates from All Over

Despite all the administrative overhead, adventures, and random hot tubs, we have been making considerable progress. Faun has been immersed in the world of PageMaker and PhotoShop, and tomorrow she takes three new monographs to the printer. This will allow us (after lo, these many years) to fulfil all the outstanding subscriptions to my old Nomadness Journal… and, in the process… give us some more inventory to keep the nickels flowing in. (Ah yes, new T-shirts, too!)

The four student project teams of this past quarter have disappeared into the vapors of summertime, and the campus is again an empty and uncivilized place (it’s only 8 PM and I can’t even get a capuccino!). Stephanie Griffin and Adrian Cordova, from the Mechanical Engineering department, completed a working model of the folding solar array — a very slick doubly-articulated hinging arrangment that’s flat when deployed, yet folds cleanly into 1/3 the normal space. The hinge scheme allows for stress-free wire routing, and was inspired by the HP-28 folding calculator. This model is not robust enough to laminate with the Solarex modules — it’s one layer of glass vacuum-bagged onto very light foam core and there’s poor adhesion to the Sky Pole fiberglass tubing (nothing a bit of pre-layup acetone won’t cure), but it’s an excellent proof-of-concept.

We lost one of the Hubfolk, but Mary Smith made some useful headway on a software scheme that allows a list of FORTH security or watch tasks to be transmitted to the Hub and then executed continuously. This bears further development, but should give us a clean method of randomly changing Hub functionality without having to recompile the whole application.

Marisela Segawa and Robin Sarno performed an exhaustive analysis of FET switches, and provided us with a reasonably refined circuit that can be cloned wherever we need to control 12-volt loads with logic-level port bits from the FORTH boards. The solution uses an N-channel FET with a pullup to control a P-channel device, eliminating the central 15-V supply and level-converter chips we used in BEHEMOTH. They also wrote some FORTH words to control 8 power switching channels in the video system.

The DAT team, Oliver Ling and David Chin, completed a fully-functional remote interface for the Sony DAT recorder, and I whipped up a quick HyperCard front end for it. The logic has become permanently integrated into node <A>, which also hosts the Audio Crossbar, and the DAT can now be completely locked away in a sealed enclosure and powered, controlled, and interconnected to anything on the ship… entirely under software control. We’re doing a monograph (NRL-508) about this — if you’re interested in the hardware and software details of interfacing a Sony D-7, please let me know and I’ll bump it up on the writing project priority list.

In the Ship department, we had a very productive 2-hour meeting with Gino Morrelli last week. He’ll be talking with the builders of our boat to learn more about the structural issues, and urges a parking-lot test in which we support the amas and carefully add water to the center hull until we’re convinced that the system can handle the requisite loads (this TERRIFIES me). Like Robb Walker, Gino emphasized the need for careful weight study, so I’ve dusted off FileMaker Pro and resumed the data-entry project, making a first pass at a full system inventory with every item tagged with weight, centers of gravity, and other details.

We also talked at length about rigging options, the intriguing possibility of removing the existing centerboard and installing daggerboards in the amas to open up cabin space, mast support robustness, and much more. He suggested that we use the aft cabin for sleeping and put the lab in the forepeak, and also raised the idea of adding a permanent hard dodger to make the cockpit space more useful and better protected from the elements. We have since considered moving the head to a lazarette and the shower to the center of the cockpit to take advantage of scuppers and keep the humidity out of the living space.

Nothing in my packaging experience has been quite so challenging as trying to figure out how all this can fit into a small boat… and this thing is CAVERNOUS by comparison with the Fulmars! We’ve begun the first steps of making a CAD model to simplify this process — I marked off the station lines (feet from the bow), and Faun crawled around with a tape measure, reading off the key measurements at each “slice” as I drew and labeled pictures. Len Wanger will help us convert these into a CAD image that we can use to visualize add-on equipment, CG location, and so on.

I’ve mentioned the kayaks, which will mount on the amas. But I’ve also been reading a lot about dinghys lately, and have noted that the required functionality of a dinghy is poorly addressed by kayaks… yacht tenders are used for a lot of hauling and anchoring tasks, and must be very stable. We’re now looking into a fast-deploying catamaran structure with netting tramp that can link the kayaks together when needed, yet let them be freed for exploration and play… rowing a dinghy is brutally slow by comparison to these little Current Designs “Storms.” We’ll see.

The Fulmar is still sitting here for sale, by the way, snuggled up to the flank of “Hogfish” in what amounts to a parking lot near UCSD. All this is going to feel a lot better when we find a lab that lets us secure all this stuff and start actual work on the boat! In the meantime, ya wanna buy a Fulmar-19? It’s summertime…….

A lot of possessions have changed hands lately — I just sold my Wilderness Systems “Sealution” kayak, as well as the commercial espresso machine. I also shipped my old Ten Tec Argonaut 515 ham radio transciever to a fellow at Lawrence Livermore Labs, then used his payment to buy an Astra IIIB sextant from a fellow in Gilroy.

This thing is amazing. I’m deep into the celestial navigation learning curve, and even though a few of my electronic friends sneer at this ancient technology, it offers the wonderful security of working even when all things electronic fail. Considering the famed ravages of salt water and lightning, I don’t think this is excessively paranoid.

It’s also startlingly satisfying to watch the movements of celestial bodies and have the tools at hand to locate oneself (within about a mile) based entirely on passive observation and a bit of math. I’m learning first with the Nautical Almanac and Sight Reduction tables, and will probably get a ROM card for my HP-48 to automate the process (which I can also do with MacNavigator, a HyperCard program). Still, the old-tech fallback will always be available… not only as a solid backup to the magic of GPS but as a frequent reminder that there’s a whole universe out there (very easy to forget in front of a computer screen).

With that, I must close — time to pack the sea bag and get ready to sail west! Assuming we survive the savage sea, the next update in this series should have a distinctly salty flavor…