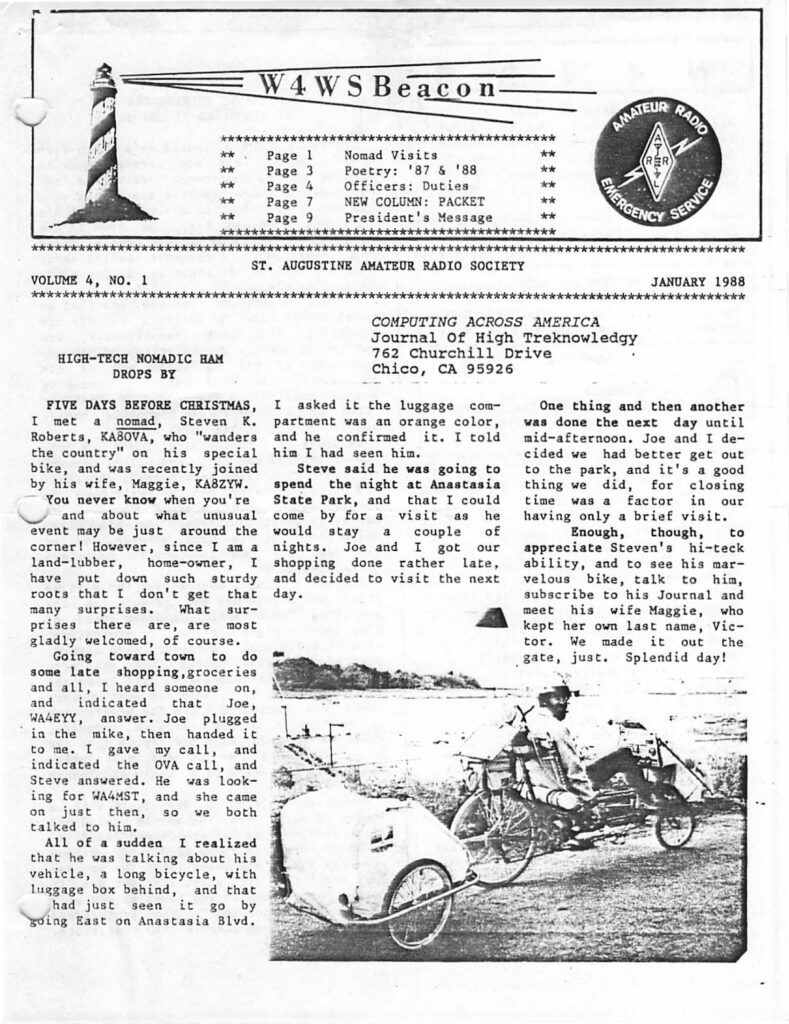 W4WS Beacon, the newsletter of the St. Augustine Amateur Radio Society, published a little feature about us as we were on our way down the coast… right at the end of the Winnebiko II epoch. A day or two later, we stopped in Titusville, tricked out a 35-foot school bus, and continued around the country for another year… selling the Computing Across America book and doing speaking gigs. That makes this story particularly special to me… it is the final snapshot of a dreamy time of life on the road.

FIVE DAYS BEFORE CHRISTMAS, I met a nomad, Steven K. Roberts, KA80VA, who “wanders the country” on his special bike, and was recently joined by his wife, Maggie, KA8ZYW.

You never know when you’re out and about what unusual event may be just around the corner! However, since I am a land-lubber, home-owner, I have put down such sturdy roots that I don’t get that many surprises. What surprises there are, are most gladly welcomed, of course.

Going toward town to do some late shopping, groceries and all, I heard someone on, and indicated that Joe, WA4EYY, answer. Joe plugged in the mike, then handed it to me. I gave my call, and indicated the OVA call, and Steve answered. He was looking for WA4MST, and she came on just then, so we both talked to him.

All of a sudden I realized that he was talking about his vehicle, a long bicycle, with luggage box behind, and that we had just seen it go by going East on Anastasia Blvd. I asked if the luggage compartment was an orange color, and he confirmed it. I told him I had seen him.

Steve said he was going to spend the night at Anastasia State Park, and that I could come by for a visit as he would stay a couple of nights. Joe and I got our shopping done rather late, and decided to visit the next day.

One thing and then another was done the next day until mid-afternoon. Joe and I decided we had better get out to the park, and it’s a good thing we did, for closing time was a factor in our having only a brief visit.

Enough, though, to appreciate Steven’s hi-tech ability, and to see his marvelous bike, talk to him, subscribe to his Journal and meet his wife Maggie, who kept her own last name, Victor. We made it out the gate, just. Splendid day!

FROM SEA TO SHINING SEA –
MY WINNEBIKO II AND ME

STEVEN K. ROBERTS, touted as a high-tech nomad, pedals his way across America marking out his domain as surely as a cowboy rode his range checking and maintaining his own. Bored with the ordinariness of his high-tech suburban life, he took to the road on an elongated bicycle and a Radio Shack Model 100. I remember reading about him, and telling Joe about it, as Joe has a Model 100, also.

Now, we have met the man. And find an unbelievable bike he built to satisfy his traveling, high tech inventiveness, and publishing needs. For he writes of his adventures, of his equipment, and of his philosophy, and puts out a “Computing Across America” JOURNAL OF HIGH TREKNOWLEDGY on a more-or-less bimonthly basis, and is working on his fifth book.

We drove but to the park, found his camp number, parked the car, and walked forward to greet this tall, dark-haired, cheerful, and quite talkative man. He will have to forgive me if after shaking hands, I immediately started showing Joe his bike. Being proud of his work, however, and on the road all the time, he is doubtless quite used to it.

The first thing I noticed was the airline style set of buttons and gadgets on the operating “dashboard” computer ahead of him, under a plastic canopy for protection, with an additional raincover when needed, powered by solar panels fore and aft. Awesome! But his handlebars, just below the seat, right and left, held the next wonder. There was equipment there for programming or writing in binary, machine language, while on the road. With the laptop computer he carries along, he can send in his written work by means of a modem and phone line.

Steve can refresh a dry mouth with a squirt of water from the bottle behind his right shoulder. He has programmed his five-computer bike to speak aloud to curious meddlers saying something like “You are being monitored from satellite (or was it Outer Space?) and if you touch me you will be instantly vaporized!” The synthesized voice is enough to startle into compliance.