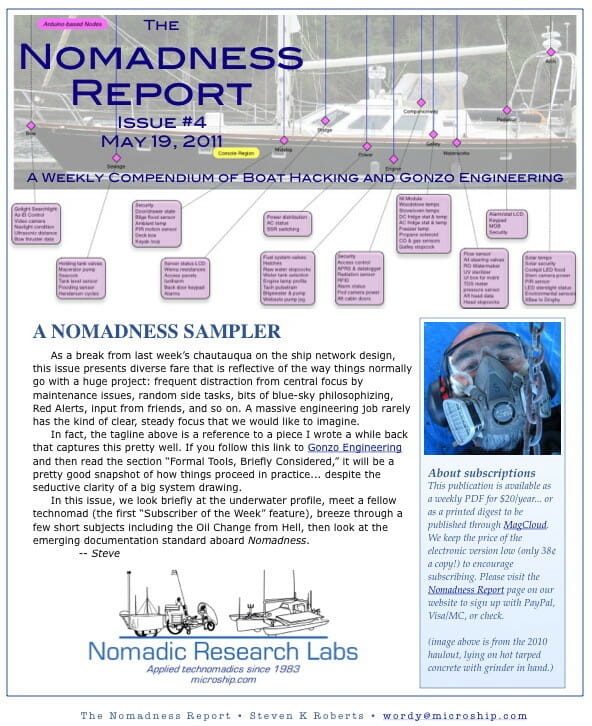 As a break from last week’s chautauqua on the ship network design, this issue presents diverse fare that is reflective of the way things normally go with a huge project: frequent distraction from central focus by maintenance issues, random side tasks, bits of blue-sky philosophizing, Red Alerts, input from friends, and so on. A massive engineering job rarely has the kind of clear, steady focus that we would like to imagine.

In fact, the tagline above is a reference to a piece I wrote a while back that captures this pretty well. If you follow this link to Gonzo Engineering and then read the section “Formal Tools, Briefly Considered,” it will be a pretty good snapshot of how things proceed in practice… despite the seductive clarity of a big system drawing.

In this issue, we look briefly at the underwater profile, meet a fellow technomad (the first “Subscriber of the Week” feature), breeze through a few short subjects including the Oil Change from Hell, then look at the emerging documentation standard aboard Nomadness.

NOTE: The full collection of 22 issues is available as a 196-page Nomadness Report PDF from our online store.

Last summer, as I wrestled with logistical alternatives, Nomadness spent a few months in Olympia. While there, she spent a few weeks on the hard in Swantown Boatyard, where I worked with Shurtz Marine on a full bottom job.

Fortunately, they let me do most of the work myself, offering all the advice I needed and happily selling me supplies, but only starting the clock when I had their guys take over. I did all the hull prep, including acid-etch and endless primering of about 200 bare steel spots in addition to a very messy keel-bottom (clearly skipped in the last haulout or two). I was delighted that none of this involved any corrosion… the hull is in beautiful shape. By the time my work was done and they did the bottom job with pricey Interlux Micron 66, I was getting very familiar with a side of the ship I rarely see (more here):

One thing I did discover, though, is a big reason for the difficulty in maneuvering at low speed or in reverse. If you look closely at the photo, you can see the 3-blade MaxProp at the trailing edge of the keel. Then there is an 11-foot gap, followed by a stout skeg-hung rudder. This means that there is none of the phenomenon known as prop walk, common to almost all boats and highly useful (once understood) for close-in handling… kicking the stern predictably to one side. Also, a prop close to a rudder throws prop wash over its surface, allowing quick turning response at low speed.

Nomadness, on the other hand, tracks very straight and only steers when there is steerageway… enough speed to start seeing hydrodynamic action on the rudder. But getting her to respond predictably from a standing start is tricky, and in reverse her helm-answering can best be described as random.

Before I start involving insurance companies in docking maneuvers, I need to deal with this. Old-timers may snort with derision, but if ever a boat was a candidate for a bow thruster, it’s this one. Essentially, this is a laterally oriented reversible prop as far forward as possible, allowing the helmsman to kick her over one way or the other.

That sounds great, but the quote from Cap Sante Marine for installing an 8-HP Lewmar was $13,000!

One of the key projects on the list for my welding guru, therefore, is what I call the Redneck Bow Thruster, a deployable rig that does not involve drilling a 180mm hole through my boat. This approach puts the thrust further from the center of lateral resistance, with a longer moment arm that should render it more effective (though fiddly).

I hope to have news on this project in the next few months… it’s an essential one.

Ages ago, in 1983, I took off around the US on a computerized recumbent bicycle. This was well-timed, blending the new technologies of portable computing and networks with the ancient ones of nomadic lifestyles and writing for a living. The media loved it, sponsors jumped aboard, and the loosely defined concept of technomadics was born.

Many other people have chosen to explore concepts of technology-enabled wandering, and there’s a whole lexicon of terms for variants on the theme: Location-Independent Professionals, NuNomads, Digital Nomads, and many more. I even have good friends who call themselves Technomadia… and they are making the transition to a bus like Ben here.

I had a bus epoch long ago, though it was not very geeky… my partner, Maggie, and I covered 16,000 miles around the US after my Computing Across America book came out in 1988 (republishing that is on my hot list). The tales of that time are in the Miles with Maggie sequel, all here on the server.

The photo above was from one of our more dramatic bus adventures, though if you want real Photoshop wizardry, meet Ben….

Subscriber of the Week: Ben Willmore

The technomadic community has been steadily growing over the 27 years since I playfully coined the term; adventurers in all modes on land, sea, and air are developing net-centric lifestyle models and mobile gizmology. Ben teaches Photoshop seminars around the US, and currently lives in a beautiful Prevost bus with his partner, Karen.

He is now working on a vintage bus project, extensively networked with distributed control and power management tools… with two robust computer workstations (20 Terabytes of storage!) and a kilowatt of solar panels. The monitoring system under development is very similar to mine, in that it is both locally and remotely accessible via browser.

The Oil Change from Hell

Here’s a warning for anyone who has recently purchased a boat… assume nothing! I certainly should have known better, but when I did my first Yanmar oil change a few months ago, I just looked at the existing Fram filter (PH2856), crossed it to a locally available NAPA 1381 (Wix), and did the job. Within seconds, all the engine oil exploded into the bilge with a horrible noise, and I’m indebted to George Pell, my dock neighbor who was helping, for thinking quickly about shutdown and bilge-pump disabling before things got really messy.

Looking closely, we discovered that the new gasket was only barely contacting the flange on the engine, and that the old one (which I had been using for about 140 engine hours including dangerous moments on lee shores), was the wrong filter type! It had never even occurred to me to question something that came with the boat, but you can see in the photo that the indentation is not only unevenly distributed around the ring but also a mere 50 thousandths of an inch wide at its narrowest. That bit of rubber is what was holding my oil in since I bought the boat.

The correct filter for the Yanmar 4JH-DTE is the Yanmar 129150-35152, which is now in stock. Removing 7 quarts of oil from the bilge is not an experience that I wish to repeat (but at least it shot down instead of up into the pilothouse!).

Every boat-owner knows this, at some level. Despite the allure of sparkling gizmology, N2K networks chattering away, and solar power streaming into well-managed AGM battery banks… there is still a lot of mysterious cruft in an aging boat.

It’s tempting to just layer on the Good Stuff, ignoring those fat bundles of unlabeled wire and random disconnected cables with corroded terminals that don’t seem to be relevant anymore. But here there be dragons, and we cannot ignore the Terra Incognita beneath our feet.

This was brought home just the other morning by a rude awakening… dock neighbors pounding on my companionway door. “Your engine alarm has been going for two hours!” This makes no sense, and in a pre-caffeine fog I tried poking at all the Yanmar bits while a friend from a neighboring boat layered duct tape over the alarm on the outside helm station to knock it down a few db. Finally we removed the panel and unplugged the wiring harness.

The day turned into a 12-hour marathon of debugging, as Al Felker and I tried to make sense of what should be a simple system. The alarms are little more than lights and horns lying between switched 12 volts and active-low sensors on the engine, and of course the engine was off… so those are not suspect. But some stray power decided, at 5 AM, to spontaneously make its way to the engine control panel.

We kept getting distracted by ever more bizarre echoes of previous ownership… intermittent connections associated with the Charge Warning light made with those cheesy automotive taps that NEVER should be used on a boat… odd serpentine wiring paths that did not match the 1987 drawings… and a relay that had been added to bypass the battery isolator when the engine is on (perhaps to remove the diode from terminal-voltage sensing, or maybe maximize voltage). We spent the day fixing random intermittents and trying to figure out what was actually there, and never did get to the root of the problem. That’s next.

The lesson here is clear. Every fiber of my being aches to build Arduino nodes, write voice-response server code, and conjure a wrap-around console alive with blinkies. Indeed, I need to make progress on those fronts just to stay interested in the core mission of this project… but in parallel, I also have to get serious about reverse-engineering.

To wit, I just bought an 11×17 all-in-one printer, with the intent of standardizing on that size and building a binder of drawings reflecting the reality of the ship (geeky stuff will go here as well). This is the new Brother MFCJ6510DW:

A bit crazy for a boat, at first glance, since it’s not exactly svelte, but the 11×17 size is considerably more pleasant for drawings and there will be a hundred or more before this is over.

I’ve already created a few rather scary hand-done drawings that attempt to capture some of the bizarre engineering incorporated into Nomadness before my time, and they represent countless hours of crawling around with an armamentarium of tools: digital camera, mirror-on-a-stick, signal tracers, Fluke multimeter, stethoscope with probe, Icom HT for RFI tracing, label maker, Sharpie, Google, powerful flashlights, and painkillers for the back pain caused by not being a willowy contortionist.

This one is one of the strangest of all, reflecting the sewage system:

Yes, it really is that convoluted. And as I have found, upgrades and changes are complicated by not fully understanding what’s down there.

So over the next few months, I’ll be cranking out drawings and other documents that reflect the infrastructure of my ship. Some will be shared here, I’m sure…

Another Take on the Step Seat…

Remember the little upholstered seat that was shown in Issue #1? My old friend Sven Grenander saw right through it, literally, and commented that it would be a great way to conjure a workbench when needed… even holding a clamp-on vise. Here’s a photo from before the fluffy stuff; if I had thought of that, I might have made the cushion a detachable (velcro-on) module instead of the traditional stapling.