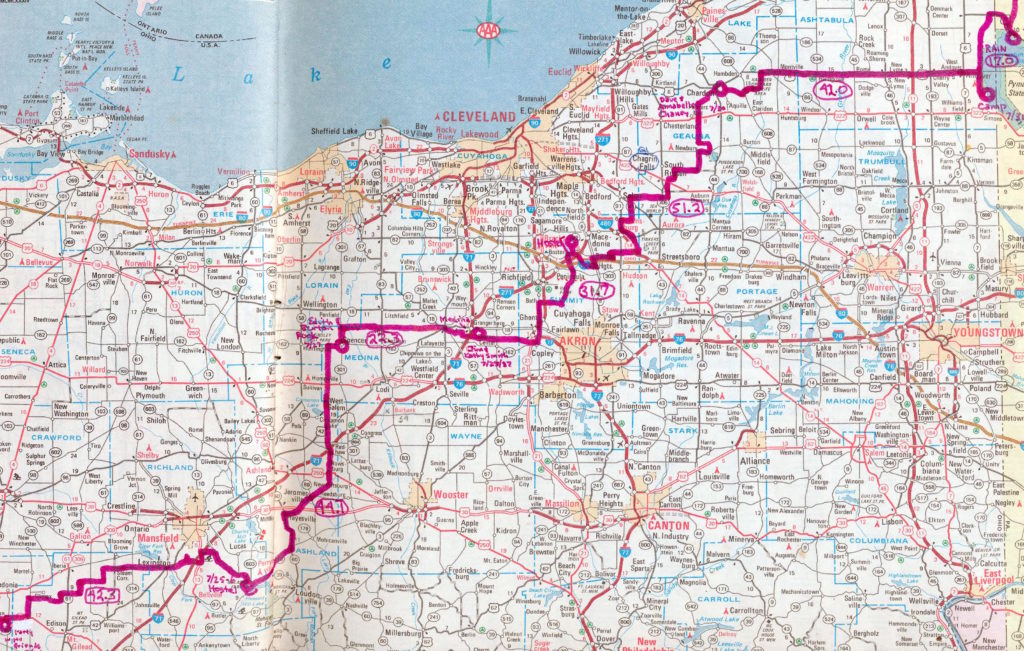 The most effective way to make it rain is to pitch camp. For eight riding days, the sun has baked our hot flesh into sweat-glistened tan, streaked with the stark white of belly wrinkles and tinged daily with a hint of fresh pink. For eight days we have gulped hot water from plastic bottles, rested in odd patches of roadside shade, and nodded at the obligatory “hot enough for ya?” from those who stop to gawk.

But now we’re camped at Pymatuning, our last stop in Ohio — the northeast corner. All the equipment is linked together into a single massive human-powered motorhome: the bikes side-by-side under a dripping brown tarp; the trailers behind them disappearing into the rear vestibule; the tent itself, grand and imposing, issuing staccato rainsounds and billowing gently in the breeze. Inside, I lean back against my trailer (the parking brake locked) and patter droplets of text into my trusty HP, perched on a camp stool.

Outside, we have the usual demographic mix of alluring and depressing. Right next door, a pleasant family with more camping gear than many young households wakes us with artificial kid-oriented enthusiasm. Dad does the talking: “Oh boy! That’s a good one. OK, 1-2-3-4, yayyy! Wow! Alright, would you stay in the car with the doors locked, say ‘no thank you’ and walk away, call 911 for help, or — what? No honey, you have that one. Right. Now remember, the first one home wins. It’s your turn…” The blonde girl looks around, a plea in her pretty brown eyes, sees me, smiles.

Across the street is mini-Rambo, a blond guy who walked over, offered to help with the tent, then said, “well, I just wanted to look at the bikes anyway.” On his belt is a 9-inch killing knife, very businesslike. I comment on this. “It’s the same one they used in the second movie,” he says. The second movie? I ask. “First Blood, part 2.” He edges his voice with reverence. “Sylvester Stallone touched this knife, man.”

His sweet little sister, 13-going-on-6, seems a little slow — she’s tan with honey hair and wide lips, as charming and innocent as a kitten. Maggie saw her in the shower building, smiling dreamily, standing in a puddle drying her feet left, right, left, right, left, right. The contrast is unnerving.

In the other direction, scowling this way and that, is a dark, ponytailed guy with scars, muscles, tattoos, and an oilhaired kid who never smiles. When he shakes water from his hands, it looks like a karate chop. I try to imagine the lessons he passes along… “the only way to make it in this world, boy, is to kick ass.” Late last night, after everyone was asleep, they rolled in and pitched camp, loudly hammering stakes and clattering poles with no interest in becoming good neighbors.

(There are some four-legged skunks too — soft, tame little beasties who amble down the lane and nose about the campsites for food. I catch myself nodding a subtle hello on the assumption of sentience, just like I do with dogs. But with humans I’m more careful, for a wave or smile is an implied invitation. Time! I want to write; everybody wants to talk. Ever notice how much of a door-opener a laptop computer is? I suppose I shouldn’t complain… that’s how I met Maggie.)

Let’s see. Next to mini-Rambo and his clan is a good-looking group, the women leggy, the guys cleancut and healthy. They’re Cleveland yuppies, friendly folks, too much like my old friends and neighbors to make a colorful story. They got almost-busted for exposed beer: it’s OK to drink here, but not if the cops’ supervisor can tell. Kids skip rope, pedal, or run around the campground. A fat guy in a hammock has a glittery T-shirt that says “Rocking Wrestling Connection”; his son is a perfect miniature of dad. A pleasant family from the Twinsburg area visited us last night, passing along tidbits of the region and subscribing to the Journal… and an endless stream of traffic flows into the campground, for it’s a weekend and people are determined to have a good time come hell or falling water.

Yep, we’re on the road. 312 miles since Columbus, eight different beds, a slowly evolving Ohio from flat to hilly… then back to flat… and back to hilly. We’ve been through Amish country, farm country, and the linked bedroom communities of Cleveland. We just missed Climax, scanned the To Do list in Reminderville, and visited two Claridons. We’ve had unexpected 14% grades, roadside sweet corn, 429 mosquito bites <slap!> make that 430, and answered a thousand questions ranging from the clever to the staggeringly naive.

It’s difficult to capture Ohio culture for you… for unlike the wild west, nothing around here seems exotic. But that’s entirely subjective: if I had spent my life in California, Ohio would seem fascinating, alien, and full of curious twists. I think it was Gilbert Keith Chesterton who said: “The purpose of travel is not to set foot on foreign land, but to set foot on your own country as foreign land.” So let me tell you about this exotic northeastern quadrant of Ohio.

It’s everywhere, rolling over hilly fields, a uniform seven-foot layer of vegetation that blankets all available land. The tassels, bronze in the sun, take on a burnished look at sunset like waves of gently-moving metal, a husky armor on the smooth body of earth.

Clearings in the cornfields harbor oil wells, cemeteries, and houses with crudely lettered SWEET CORN 1.00/DOZ signs. A ramshackle shack selling fish is called “A Taste of Class.” (Hey — could a security scheme for computer memory be called a ramshackle?)

Anyway. The towns are small, some only crossroads with a slightly higher population density than the surrounding land. Linking the named places are the roads we’ve chosen — tiny farm lanes with ragged surfaces, tar and chip, potholes, asphalt ravaged like teenage skin by the freeze-thaw cycles of Ohio winter. Our maps, detailing all this, fail to mention road closures, gravel, and rough grades — making the eventual route a convoluted thing indeed. Most of the direct alternatives, of course, involve heavy traffic — especially near Cleveland where the volume of urgent commuters is enough to cause frequent panic.

It’s no wonder, then, that we reacted with delight upon finding a bike path around the city. But even that turned out to be impenetrable: the gate, designed to keep out motorized vehicles, also manages to keep out recumbents, loaded touring bikes, trailers, and fat people. The cycling community has a long, long way to go…

I suppose it IS possible to wax poetic about Ohio, my last column’s rantings about Columbus notwithstanding. As we pedaled northeast, the land gradually evolved from changeless to picturesque. (Picturesque… think about that for a second. When reality is spectacular enough, we compare it to a reflection of reality.)

It was lunchtime in Hayesville, fresh from a boiling 300-baud pay-phone upload in the hot sun. A woman in her 90’s walked over. “I’m just fascinated by your motorcycles.”

“They’re bicycles,” Maggie told her with a smile. “Ohhhh, then I’m even more fascinated by your bicycles!”

North. Next stop was the home of the Rooks in Spencer — about 25 miles from Akron. On the road, the family of a friend feels like a family of my own, and within minutes we were relaxed and comfortable in this country home. Edith is an artist in the kitchen, and we sat in the sweet torpor of hunger eloquently fulfilled and swilled coffee, swapping tales of life, kids, and the nearby Amish. In the garage the bikes stood at the focal point of obsessive neighborhood curiosity — for in a small town like this, people take the time to know each other’s business. By the time we left the next morning, Spencer felt warm and cozy: one lady, hugging us good-bye, was on the edge of tears.

Yes, Ohio does have its moments. We pedaled slowly through miles of Amish country, riding up Firestone Road in Medina County along with horse-drawn buggies — watching women in long dark dresses working around farmhouse yards, men in traditional hats and long beards practicing 1900 farming techniques. Yet… none of it is for the benefit of tourists, though at first glance the Amish seem too culturally pure to be anything but a re-enactment of an earlier time (a strange commentary on life in America). Their technology is frozen in the past, quite capable of outliving ours but startling in its blatant denial of available tools.

The effects can be extreme. When the Amish buy a house, they pay off the mortgage and then rip out the electricity and water — along with all connected frivolities like washing machines and trash compactors. I tried to grasp the spectrum defined by the extremes of my Winnebiko and their stylized farms, tried to imagine how they would react to the HP computer, the GEnie network, packet radio, and my tiny TV set. Then I realized that I couldn’t bundle oats in weather-resistant shocks any more than they could type in ASCII… nor would either of us particularly care to swap idioms. We are aliens, representatives of cultures that can, at best, only eye each other in disbelief.

Onward. We rode with a Medina friend to our second hostel since Columbus (the first being Malabar), a classic old farmhouse north of Peninsula. Needing a break, we took a dip in yet another unfamiliar culture…

I lay on my back, half-naked, clutching a foam pad around my body as cool water washed over me and threatened to carry me away. “Five!” cried a bikini-clad girl on the tower, her amplified voice echoing from concrete and trees.

This was my cue, the number emblazoned in black on the wall beside my head. Heart pounding, I pushed off, watching wide-eyed between my legs as the blue chute swallowed me like a coin in a vending machine. On the first turn, I whipped against the sidewall and loosed a startled shout; on the second, my knee touched dry fiberglass and instantly lost a square inch of skin with a burning screech. Faster. Left, right, losing track, my body flying luge-like through wild curves, brain locked in a sort of terrified glee until the final plunge swept me underwater — losing the mat, losing all perspective, sputtering to the surface with a laugh and a shout to find Maggie giggling at the ludicrous image of her man totally out of control.

After the Dover Lake water slides, we pressed on. The Chaneys in Chardon, cycle touring in their 70’s, activists in cyclists’ rights. East, east, sensing change, past a township hosting both a tent revival and a psychic fair on the same weekend. Onward through Montville, where an ancient black man pumped my hand and exclaimed in a thick accent: “I seen you on TV, but I never dreamed you’d come through Montville!” And finally… here… the Pymatuning terminus of our Buckeye meanderings, a confusing swirl of campground humanity ranging from the despicable to the delightful. But everyone is good-spirited and of a mind to play.

And that’s what it’s all about. The only people who scare me are the ones who never take a break.