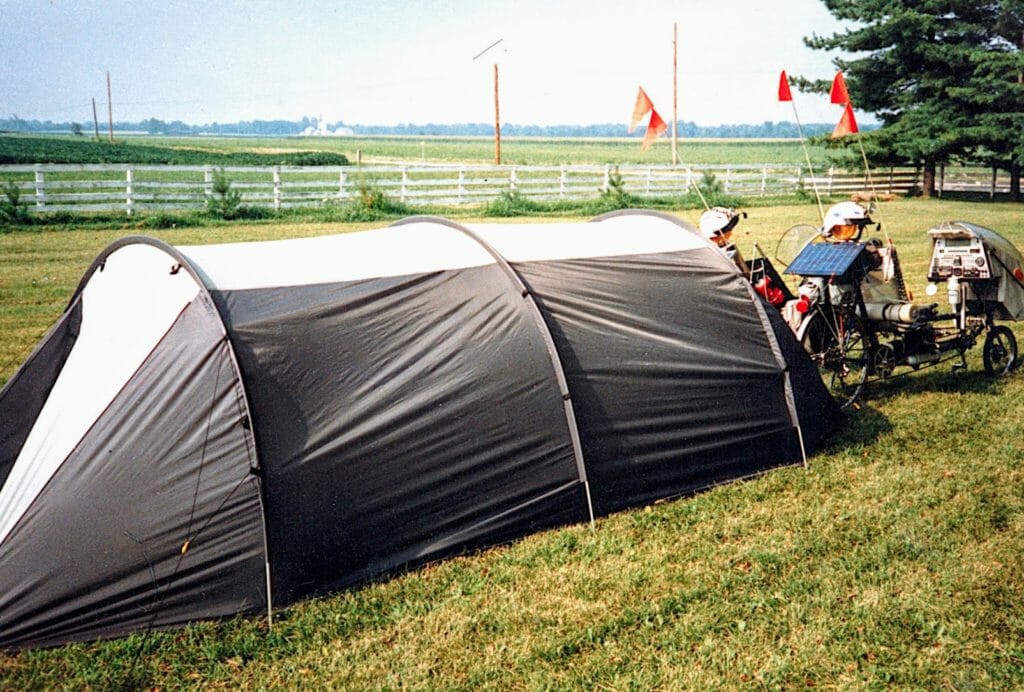 Marion, Ohio, was Maggie’s home town… and the local paper followed her story with occasional updates from the road. This is a shift in perspective from most of the newspaper articles in this archive; she is the star! We were on our way northeast on the second leg of the Winnebiko II adventure, and stopped to visit…

A little shy of a year ago, Maggie Victor quit her job, moved out of her apartment and took up a nomadic lifestyle on wheels. Victor, a former Marionite, had been invited to travel across country by a freelance writer from Columbus, Steven Roberts, who had been on the road three years — or 10,000 miles — and had just completed a book about his ventures.

That Roberts wrote his book during his travels was not so unusual. But that he wrote the text while riding his bicycle is a feat that has yet to be matched. And that’s how the Guinness Book of World Records has it, too.

Roberts and Victor each are pedaling a recumbent bicycle, a long, low odd-looking vehicle that allows the rider to sit in a semi-reclining position and steer with arms down by the biker’s sides. Their bicycles each have a solar energy panel situated behind the biker’s head and over the bike’s dashboard. Each bike has communication systems that enable the bikers to communicate with one another, as well as other hams.

But the best communications device on Roberts’ bicycle is a word-processor that enables him to write as he goes, store copy and transmit copy to editors and publishers nationwide. In addition to freelancing magazine articles, he conducts business correspondence through “electronic mail.” Thus the name of his book, Computing Across America.

This weekend, the traveling duo hiked to Marion, giving Victor a chance to touch home base before venturing off for the next journey, which will take them through New England. They had just returned from a trip out West, most of which was spent in California.

Two weeks ago, while staying in Akron, they were videotaped for an episode on a new TV series this fall, Amazing World of Guinness Records.

The computerized bicycle is Roberts’ brainchild. He operates the keyboard by using a coding scheme built into his handlebars. “I play them like a flute,” he said, “except the output is text instead of music.”

Roberts decided to computerize his bicycle because, as he said, “I had all this time awake and alone and was in capable of being productive.”

Victor stores a personal lap-size computer which she uses during stationary times and has begun to freelance for magazines. She also contributes to her and Roberts’ monthly magazine, Journal of High Treknowledgy, which provides a record of their travels — places, people and a slew of interesting experiences and tidbits.

For example, Victor publishes recipes she’s gathering from people that have been hosts to the couple in their homes or from people met at camp sites.

For the first several months of her journey she wrote a column for The Marion Star titled Miles with Maggie.

After a year on the road, Victor says she could not imagine doing anything else with her life at this time. When living in Marion, she worked in weatherization at Marion Crawford Community Action Commission, and although she enjoyed that work she felt something was lacking in her life.

So the change of lifestyles and vocation has provided her with a sense of purpose. “It got me out of a rut,” she said. “Before, I was just kind of existing. I couldn’t believe I lived six years like that. And my life before that was a lot of turmoil.”

A main lure for her is the challenges she encounters both physically and mentally.

“It’s very educational. Besides what I learn from Steve, I learn from other people. And I’ve been exposed to all kinds of media” — which benefits her freelancing, she said.

“And it’s healthy. We eat well, get exercise — sometimes it gets a little hard, but everybody needs a challenge. That’s what keeps you going. When you see this mountain ahead of you on the road, it looks like a wall before you. Then you gotta climb that wall. But when you get on top, it’s a great view, and you know you made it. It’s so gratifying.”

Despite the difficulties, there are advantages to traveling by bicycle.

“By pedaling, you really get to know what a community is like.” As for meeting people, she said, “I’ve got friends all over the country now. If I decide I want to settle down and get a job in one place, I’ve got contacts all over.”

Victor admits she likes attention, but sometimes people crowding around and asking lots of questions can be draining. “Creating a sensation got old real fast,” she said.

Sometimes when camping, Roberts said, they cover their bicycles with tarps, and then they can be like “normal people.”

Victor also has created a display which includes fliers containing basic information about Roberts’ work on the road via his computerized recumbent bicycle.

Rather than standing around answering questions of passersby, Victor said, the more rewarding time is sitting around a campfire or in someone’s living room with a smaller, more intimate group and sharing tales about their travels.

In addition to writing, the traveling companions see their journeys around the states as having a mission of sorts — showing that communication is essential in breaking down the barriers people place between themselves and others.

In part, the computer system shows how communication barriers can be broken down — even on a crazy-looking bicycle that averages a mere 15 mph and 55 miles a day.

Another way the commonality and inter-relatedness of people is shown is through the bicyclists’ presence in communities all over this nation. By passing through various communities, sharing smiles and conversation, they seem to be saying there are no real boundaries between humans — just imaginary ones.