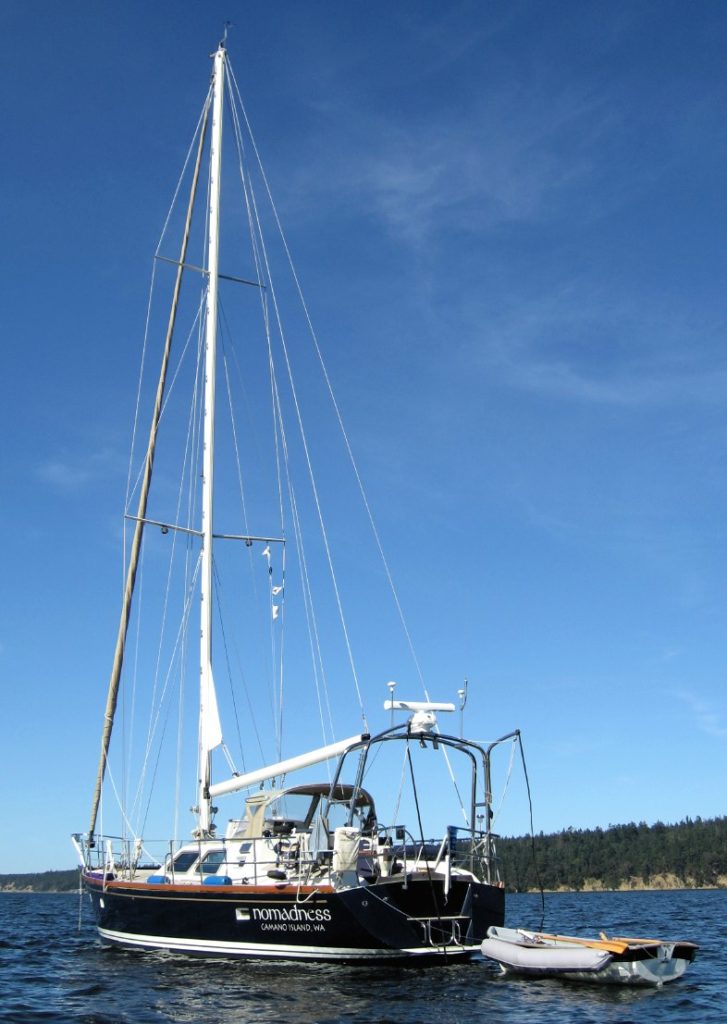 I can already see how the winter is going to take shape, and it’s going to take a major exercise of will to get through it. “Next steps” bubble to the top of OmniFocus and get flagged, I make a first-pass approximation of stuff needed and load up the truck, then drive far away and camp alone on the boat for a few days… chipping away at the more accessible items until they fall away, resist me enough to be postponed, or reveal themselves to be more difficult than expected and are thus factored into still more tasks. Thus does a to-do list become self-perpetuating.

One in the latter category is what initially prompted me to mutter “I hate computers” and make the too-easy transition from doing to blogging. The Axis 210 Network Camera is a cool little stand-alone webcam with built-in server, and I have used it in the normal home router environment. Now it’s becoming part of the ship’s extensive security system, easing my mind a bit when I’m across the Big Water.

It took a fair bit of clumsy poking at admin screens, though, and even when it started to work I couldn’t see it from here except within the LAN. Changing to static IP may have done it, or perhaps I just stumbled on the correct incantations. When you network enough computers together, apparently, their collective behavior becomes organic and unpredictable (though we must resist the temptation to anthropomorphize them; they really hate that.)

Interesting phenomenon, by the way. Firefox (version 3.0.3), once it starts displaying the streaming video from the camera, will not “let go” of whatever it’s doing… even when the browser window is closed. It continues to gobble over 90% of a CPU, raises the machine temperature to about 170°, and causes iStat to report nearly a megabyte/second of download bandwidth. This continues until the camera is unplugged or Firefox is quit and then restarted… highly pathological behavior and probably bugzilla-worthy. (Ancient Mozilla 1.7.8 that I keep around just for Composer behaves properly and stops streaming video when I close the window that contains it.) Makes ya wonder what else is going on in the background…

Other recent attempts to rearrange bits on disks have been a little smoother. The Nomadness site was getting a bit long-in-the-tooth, especially the old articles collection. As I mentioned in my previous post, a key part of the “business model” is keeping useful information flowing out of my head-banging on the boat, and doing it in my old creaky hand-edited HTML is a bit anachronistic. The site now has a proper content-management system; now all I need is content… as well as the continuation of a learning curve that is not as graceful as I would like, given the short bursts of attention on my end and the convoluted nature of the subject itself.

The new holding tank is working, though occasionally it belches foul gas. I found one dip tube fitting that the overpriced plumber-from-hell had forgotten to tighten (by 2 full turns!), but the source of the random eructation continues to elude me. The forward system is completely independent of the aft one with its still-nonfunctional LectraSan… though a neighbor here at the marina just gave me some tips on being much more aggressive with the muriatic acid. I’ll try it.

In a much less stinky part of the plumbing system, I just replaced the Groco raw-water filter baskets. One was full of eelgrass when I checked it recently; the other was not blocking much of anything:

The weather is blustery here, and when I saw an Islander Freeport 41 named Tranquility heading in well after dark last night (just back from Alaska), I naturally donned my foulies and ran out to catch their lines… for I have lots of docking karma to repay after my occasionally, ahem, less-than-perfect maneuvers over the past few months. The new neighbors are interesting folks, and in 18 years of full-timing they have refined their boat in countless ways for comfort and efficiency.

One of the more alluring ideas inspired by today’s tour of their ship is the enhancement of my current cockpit with at least a hard dodger and perhaps a whole second-level pilothouse (a hard dodger with walls). Technically, I already have a pilothouse… the main salon of this boat includes a steering station and nice all-around greenhouse windows for solar heating and visibility. It’s sexy and sleek, but the reality is that visibility isn’t very good from below and I thus spend 99% of my on-water time at the outside helm (standing, for the most part, but that’s another problem).

There are times, during which pictures on the front covers of sailing magazines are taken, when the notion of being enclosed while steering seems absurd. But a well-designed system with very broad openings on all sides would allow navigation and piloting activity to be focused where it is most useful, protect the helmsman from foul weather and excessive sun, improve security, add living space, and generally make life aboard more pleasant. I’m staring at it quite a bit while here, imagining a homebrew glass-over-ply assembly with decent windows and wide-open winch clearance, carrying the lines of the boat so she doesn’t look boxy. We’ll see.

Of course, there are more immediate and pressing issues. “Rust never sleeps,” as Neil Young once observed, and I have lots of it: gudgeon-dings at the transom, bad installation at the windlass, trapped moisture at the toerail tabs, galvanic action at various fittings, and even a few random spots in an otherwise flawless expanse of Awlgrip. Today I was fortunate to have a visit from the local boatyard owner, and he gave me lots of advice on incrementally dealing with it. Next work-visit, I’m bringing the armamentarium of grinding/sanding/scraping tools, and he’s setting me up with a starter kit of primer and other goo. This is a big sturdy steel boat; there’s no reason to try for the “Bristol finish” (which I can’t afford anyway)… the real key is staying on top of it enough to keep the metal protected.

I just finished one of the major jobs that was scheduled for this first session: opening all three diesel tanks, specifying the new Wema level sensors, and getting them on order. It has been maddening during the recent adventure to have very little idea how much fuel was on board, especially since two of the tanks came with an unknown amount of diesel of unknown vintage. This translated into ongoing stress about bio-gunk clogging filters, sucking air at a bad moment and digging out the Calder book to tackle the engine-bleeding learning curve while drifting into a marina full of expensive boats, and lacking basic situational awareness about my own vessel.

A cheesy gauge, miswired, did come with the boat… and much fiddling with the Fluke meter failed to turn up any apparent correlation between assumed levels and the observed resistances of senders (even after taking the 90-gallon aft tank from empty to full, 10.0 careful gallons at a time). So I’ve been in the dark, like all this stuff:

I was hoping whilst poking around that the Webasto mystery would be solved in the process, and I even used the transfer pump to schlep a gallon or so from the aft tank to starboard… but no luck on that one, even though it did appear that the pickup tube is at or near the surface and might have inhaled a bubble. But at least the other task is complete… I’ve just ordered a trio of sensors (14, 18, and 20 inches). Data from these will find their way onto the NMEA 2000 network via Maretron TLA100 Tank Level Adapters, and thence to displays wherever needed.

One of the high-priority projects is elimination of the sloppy ProSine 2.0 inverter/charger and installation of the Outback FX2012, MX60 solar charge controller, and related monitoring equipment. Since the original power installation is in a closed equipment bay, cooling has been inadequate and the unit shuts down when trying to charge at anything over 50 amps (about half of what it should be doing).

Still, there’s really no place else to put all this, and my fleeting thoughts of replacing the microwave with the inverter/charger just to have convective cooling were dashed when I actually looked at it closely. So the plan now is to use the same enclosure space, but add a large louvered vent at the bottom and a smaller one at the top (although the path up there gets convoluted) to allow convective airflow with fan-assist when the temperature gets too high. With proper thermal design, I can also circulate air through the cool bilge. Here’s the environment:

The panel on the left is the inside steering station, and the one on the right is the DC power distribution panel. The gray box with yellow top is the Xantrex box; that spot will carry the solar charge controller. The new inverter/charger will live out of sight below the hinged panel, with the vent panel installed in that vertical wood surface.

Sky and I are establishing a rhythm in another key domain… if we’re ever going to really cast off the lines for good and sail into the sunset, we have a lot of stuff to get rid of. Given that the economy is tanking and most of the advice I’ve gotten in that domain has led to painful losses, we’re looking at the sprawling pile of artifacts in our Camano facilities as a state of energy that can be transformed into boat parts.

She is researching antiquarian books and various other things, taking photos and writing ’em up, then I do the eBay listings. The Microship General Store is finally starting to pick up again after a long hiatus. Want some stuff?

I am trying to remember not to take any of this too seriously. The list is just that… a list… and as long as we get the essentials done enough to complete the escape pod and make of life what we can, then the rest — or whatever is truly important — will follow. Nothing is permanent, especially at this age; I’ve already spent way too many years building elaborate machines to chase quixotic dreams, and now, freshly turned 56, am finding adventure and freedom much more alluring than gizmology for its own sake. (Of course, where the latter potentiates the former, it’s a different matter entirely.)

I find this kind of poignant:

That was once someone’s little boatlet, zipping around the harbor, probably with an outboard on the back, perhaps hauling laughing kids, lovers, crab pots, fishing poles, toys. Maybe it even hung for a while on the stern of a cruising boat and traveled around… but now it’s slowly returning to the earth, just something to trip over on the shores of Utsalady Bay.

Someday, likewise, Nomadness will fall into other hands, sail other seas… then eventually she will become a fixer-upper, a project boat, an antique. At long last Mother Nature will win, and, deep in the arms of entropy, her elements, even the once-blinking geeky ones, will leech into the sea or the muck of an undredged and forgotten channel. It is my job to not only delay that moment as best I can, but also to ensure that her time as a boat… and mine as a human… are spent with maximum glee, here and now.

So. Those 621 miles we just covered were just a teaser, and, dear friends in the Vapours of the Net, please don’t let me forget what’s important. If you see this dragging on too long as has been known to happen at Nomadic Research Labs, you are hereby empowered to give me a proper kick in the pants.

Cheers from a sloppy, cold, windy night aboard… with wavelets slapping annoyingly under the transom, nearby halyards slapping, and seagulls squawking in the night…