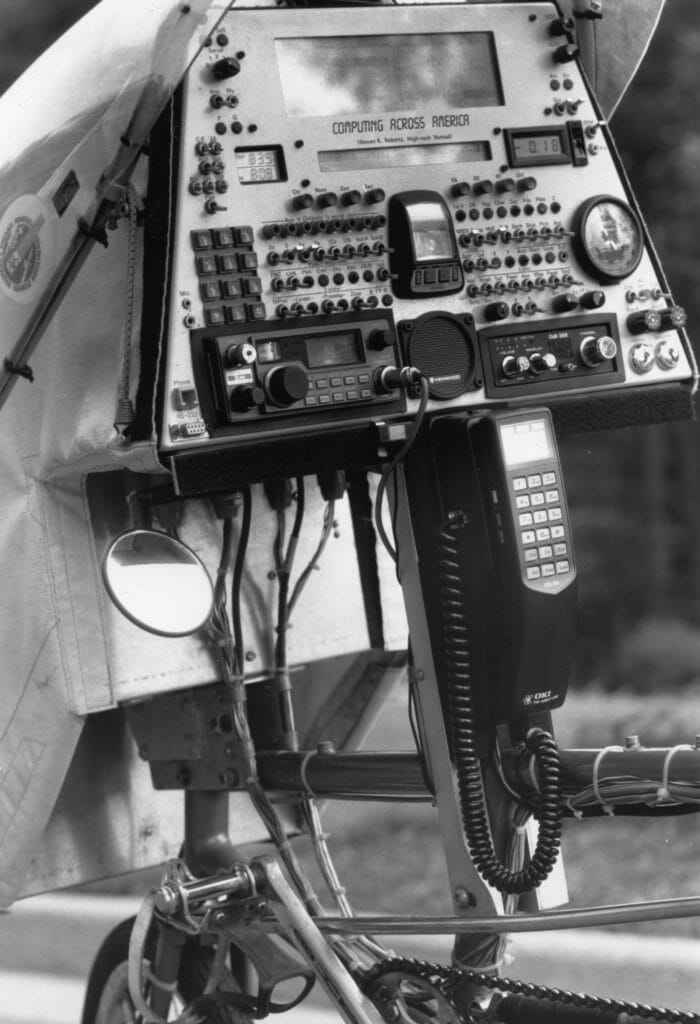 This was a huge and significant addition to the Winnebiko II near the end of its epoch, and it became very well-integrated into BEHEMOTH… one of those amazing new cellular phones that were rocking the industry. Mine was donated by Oki Telecom, and this is their announcement to company employees. But it went much farther, triggering immediate CNN coverage while I was visiting the company in Atlanta, along with a detailed article in Cellular Business a few months later. This one in Telocator is delightful as well, mentioning that the company was seeking “a well-known female who uses or wants to use a cellular phone” since Oki wants to increase its visibility with additional celebrities! Things were changing fast in this embryonic industry.

By the time it had become a fully-embedded part of BEHEMOTH, this Oki 491 3-watt phone had the Celjack between handset and TRU, allowing a loop-start RJ-11 line to be run around the bike. This supported modem, fax, Zon credit-card verifier, and cordless phone with answering machine.

The CDL491, OKI’s unique transportable that features selectable power output, was mounted on the stem of the “Winnebiko” by personnel from OKI’s Service and Engineering departments. The Winnebiko is an 8 foot recumbent bicycle weighing approximately 275 pounds, and features a binary keyboard in the handlebars, a computer built into the console, and solar battery panels. Roberts has logged over 16,000 miles in four years crisscrossing America and writing articles about technology and his unusual encounters.

With his CDL491, Roberts can now communicate while on the road plus have the capability of transmitting copy via cellular, and transmitting and receiving hard copy by hooking his facsimile machine to the phone.