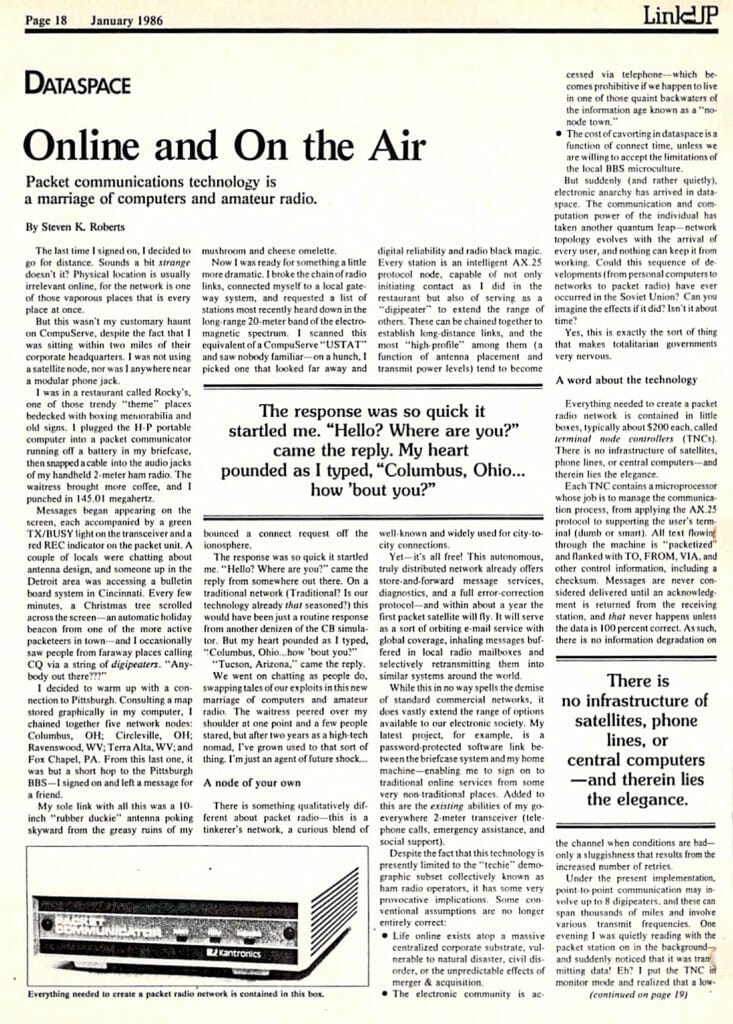 Packet communications technology is a
marriage of computers and amateur radio.

The last time I signed on, I decided to go for distance. Sounds a bit strange doesn’t it? Physical location is usually irrelevant online, for the network is one of those vaporous places that is every place at once.

But this wasn’t my customary haunt on CompuServe, despite the fact that I was sitting within two miles of their corporate headquarters. I was not using a satellite node, nor was I anywhere near a modular phone jack.

I was in a restaurant called Rocky’s, one of those trendy “theme” places bedecked with boxing memorabilia and old signs. I plugged the H-P portable computer into a packet communicator running off a battery in my briefcase, then snapped a cable into the audio jacks of my handheld 2-meter ham radio. The waitress brought more coffee, and I punched in 145.01 megahertz.

Messages began appearing on the screen, each accompanied by a green TX/BUSY light on the transceiver and a red REC indicator on the packet unit. A couple of locals were chatting about antenna design, and someone up in the Detroit area was accessing a bulletin board system in Cincinnati. Every few minutes, a Christmas tree scrolled across the screen — an automatic holiday beacon from one of the more active packeteers in town — and I occasionally saw people from faraway places calling CQ via a string of digipeaters. “Anybody out there???”

I decided to warm up with a connection to Pittsburgh. Consulting a map stored graphically in my computer, I chained together five network nodes: Columbus, OH; Circleville, OH; Ravenswood, WV; Terra Alta, WV; and Fox Chapel, PA. From this last one, it was but a short hop to the Pittsburgh BBS — I signed on and left a message for a friend.

My sole link with all this was a 10-inch “rubber duckie” antenna poking skyward from the greasy ruins of my mushroom and cheese omelette.

Now I was ready for something a little more dramatic. I broke the chain of radio links, connected myself to a local gateway system, and requested a list of stations most recently heard down in the long-range 20-meter band of the electromagnetic spectrum. I scanned this equivalent of a CompuServe “USTAT” and saw nobody familiar — on a hunch, I picked one that looked far away and bounced a connect request off the ionosphere.

The response was so quick it startled me. “Hello? Where are you?” came the reply from somewhere out there. On a traditional network (Traditional? Is our technology already that seasoned?) this would have been just a routine response from another denizen of the CB simulator. But my heart pounded as I typed, “Columbus, Ohio… how ’bout you?”

“Tucson, Arizona,” came the reply. We went on chatting as people do, swapping tales of our exploits in this new marriage of computers and amateur radio. The waitress peered over my shoulder at one point and a few people stared, but after two years as a high-tech nomad, I’ve grown used to that sort of thing. I’m just an agent of future shock…

A node of your own

There is something qualitatively different about packet radio — this is a tinkerer’s network, a curious blend of digital reliability and radio black magic. Every station is an intelligent AX.25 protocol node, capable of not only initiating contact as I did in the restaurant but also of serving as a “digipeater” to extend the range of others. These can be chained together to establish long-distance links, and the most “high-profile” among them (a function of antenna placement and transmit power levels) tend to become well known and widely used for city-to-city connections.

Yet — it’s all free! This autonomous, truly distributed network already offers store-and-forward message services, diagnostics, and a full error-correction protocol — and within about a year the first packet satellite will fly. It will serve as a sort of orbiting e-mail service with global coverage, inhaling messages buffered in local radio mailboxes and selectively retransmitting them into similar systems around the world.

While this in no way spells the demise of standard commercial networks, it does vastly extend the range of options available to our electronic society. My latest project, for example, is a password-protected software link between the briefcase system and my home machine — enabling me to sign on to traditional online services from some very non-traditional places. Added to this are the existing abilities of my go-anywhere 2-meter transceiver (telephone calls, emergency assistance, and social support).

Despite the fact that this technology is presently limited to the “techie” demographic subset collectively known as ham radio operators, it has some very provocative implications. Some conventional assumptions are no longer entirely correct:

But suddenly (and rather quietly), electronic anarchy has arrived in dataspace. The communication and computation power of the individual has taken another quantum leap — network topology evolves with the arrival of every user, and nothing can keep it from working. Could this sequence of developments (from personal computers to networks to packet radio) have ever occurred in the Soviet Union? Can you imagine the effects if it did? Isn’t it about time?

Yes. this is exactly the sort of thing that makes totalitarian governments very nervous.

A word about the technology

Everything needed to create a packet radio network is contained in little boxes, typically about $200 each, called terminal node controllers (TNCs), There is no infrastructure of satellites, phone lines, or central computers — and therein lies the elegance.

Each TNC contains a microprocessor whose job is to manage the communication process, from applying the AX.25 protocol to supporting the user’s terminal (dumb or smart). All text flowing through the machine is “packetized” and flanked with TO, FROM, VIA, and other control information, including a checksum. Messages are never considered delivered until an acknowledgment is returned from the receiving station, and that never happens unless the data is 100 percent correct. As such, there is no information degradation on the channel when conditions are bad — only a sluggishness that results from the increased number of retries.

Under the present implementation, point-to-point communication may involve up to 8 digipeaters, and these can span thousands of miles and involve various transmit frequencies. One evening I was quietly reading with the packet station on in the background — and suddenly noticed that it was transmitting data! Eh? I put the TNC in monitor mode and realized that a low-power station down the street was using me to reach a major digipeater — and from there he had linked across wintry farmland all the way to Lafayette, Indiana. This process did not tie up my station at all, for the TNC takes care of timing and collision-prevention.

It also handles file transfers, beacons, tracking calls heard, various levels of monitoring, traffic management, open-forum discussion, format conversion, and more. These little units are designed for easy plug-connection to terminal and radio, and at least one model is built of low-power CMOS — perfect (at 25 mA current drain) for a briefcase- or bicycle-borne datacomm system. The only limitations arc those that apply to the amateur radio service itself: no business traffic is permitted. But there is no law that says TNCs can only be used on ham frequencies…

In short, we now have not only access to computer networks, but ownership of them as well.

For further information, contact your local amateur radio store or browse DL9 in CompuServe’s HAMNET SIG. There may be found digipeater maps, lists of TNC manufacturers, technical papers, usage reports, and much more. 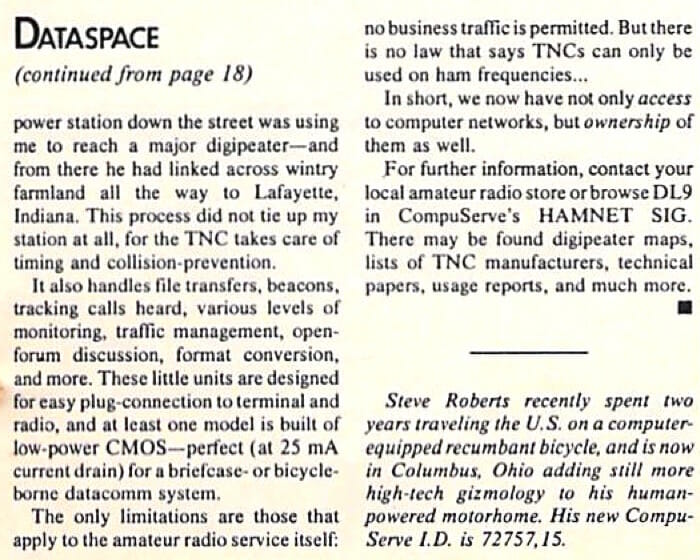