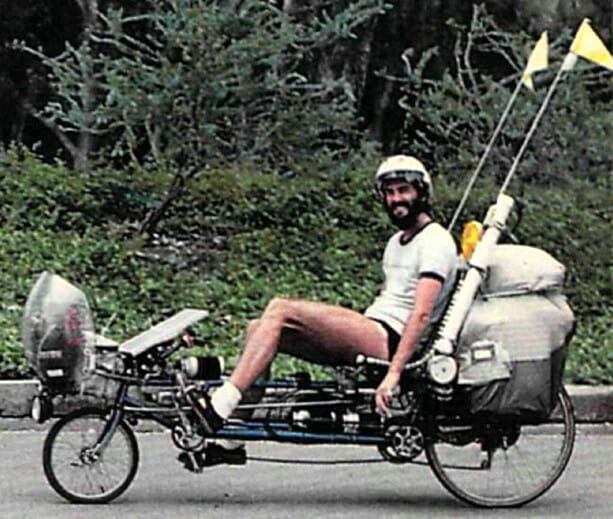 This was one of my rare forays into the in-flight magazines, published in the interlude between the Winnebiko and the Winnebiko II. The photo was taken during my book-writing layover in San Clemente, California. This version of the bike was lean and well-tuned, fresh from 10,000 miles on the road. That fabric enclosure in the back is a beautiful pack cover fabricated in Santa Fe, New Mexico… and the white PVC was a case for my flute. 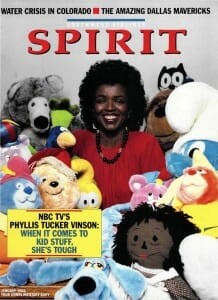 Technology writer Steven K. Roberts spent six years behind a desk wondering whether he would wither with writer’s cramp if he deserted his cozy office and tried to compose his thoughts in wild-animal-ridden forests. To find out, Roberts took his writing business on a cross-country adventure.

Combining rugged travel with space-age ingenuity, Roberts designed and built an eighteen-speed high-tech bicycle, equipping it with solar panels to power everything from a tent lamp to a portable computer. He installed digital, CB and ham radios, a security system, a compass and even a trunk for his flute. The ultimate in homemade technology, the bike may not have all the comforts of a motorhome, but it’s the next best thing—that’s why Roberts calls it his “Winnebiko.”

Without a book contract, sponsors or even a bank account, Roberts set out in fall 1983 and traveled for a year and a half. Leaving his home in Columbus, Ohio, he rode east, on down to Florida, and west along the Gulf to Texas. By freelance writing while on the road, Roberts earned a living and maintained a Columbus office, where he transmitted most of his writing, via his portable computer.

While wheeling through Texas, Roberts wrote five chapters to his book, Computing Across America: The Bicycle Odyssey of a High-Tech Nomad. Fascinated by Austin, Roberts lived there for a month, laboring over a chapter devoted to the city, which he called “A High-Tech Oasis in the Texas Sun.” From Texas, Roberts rode west over the Rockies and on to the Pacific.

After computing across the entire United States, Roberts has returned to Ohio and put his Winnebiko in the garage. Back in Ohio, he’s writing again at a comfortable old desk.