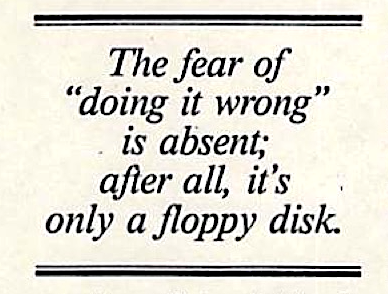 This industry has a serious problem. It’s called “marketing.”

Selling information is not at all like selling widgets—this business offers intangible services that mean something different to every potential customer. Vaporous goods are hard to price and still harder to sell.

The traditional marketing strategy among widget manufacturers is to position their products relative to the competition while emphasizing the benefits a user will enjoy. Their products are unambiguous and photographable: their target markets are clear.

But that’s not the information business. Online services were spawned in the closed circles of research and academia, and our adolescent industry is still noticeably incestuous. This is 30 percent myopia and 70 percent expedience, Trying to explain “online” to the mainstream business market is like trying to convince Masai tribesmen that they need $100/hour attorneys. How do complex telecommunication networks look to a guy who’s not entirely sure what a modem is for, a guy who gets mental images of dbase III whenever you say the word ‘database’? It’s much easier for the information industry to just advertise to the information industry and hope that enough rumors leak out to attract new customers.

Of course, once you sit someone down in front of a terminal and demonstrate the magic of online searching, you have ’em hooked. But this is expensive (even with a demo password, someone has to pay for communications), and it requires physical presence, well-trained sales people, and lots of coffee.

There must be an easier way.

I thought I was online

When Diane Squire of Online Technologies, Inc. (Santa Clara, CA) presented Dow Jones News/Retrieval president Bill Dunn with a prototype DJNR tutorial running on a Compaq, he played with it for a while and then realized with a bit of shock that he was not interacting online with his own system. The implications were immediately clear to all concerned: you don’t have to be ringing up connect charges to experience the feeling of using an information service.

This was ammunition enough. Online Technologies landed a contract to develop an online demo disk for the service, and in July 1985 the project was completed. While Dow Jones is unwilling to reveal the numbers, it is obvious that their new marketing tool is having a dramatic effect on sales.

The demo, with its fast menus and eyecatching graphics, offers short samplings of the system organized by application category. While simulated sessions scroll by at a realistic baud rate, pop-up windows explain what’s going on—without the distraction of counter-intuitive navigational commands that tend to daunt online neophytes. Potential Dow Jones subscribers can “safely” experience the sensation of being online, unwatched by the clock or an intimidating system wizard. The fear of “doing it wrong” is absent, for after all… it’s only a floppy disk.

As a marketing device, the offline demo addresses a clear need: it demonstrates the scope of available information without the clutter of command protocols. Since it is organized along logical application boundaries (not database boundaries), it communicates benefits over features—a classic objective of product advertising.

Dow Jones is taking advantage of the competition’s “window of vulnerability” with aggressive deployment of their $5 disk. Monitored tests with existing subscribers reveal a clear increase in system use among those who received sample copies—as the lively demonstrations illuminate system uses they hadn’t considered. The program is running in the club lounges of some airports, it has been nominated by the IIA for the Innovative Marketing award, and it’s being given away as the “eleventh disk” in boxes of Maxell floppies. “Everybody wins on that deal,” observed a Dow Jones spokesman, clearly delighted by the early response from the company’s traditionally hesitant business market.

“Customers don’t want to know about the variety of databases and user interfaces out there,” commented Online Technology’s Squire, “they just want to know where they can get the information they need. That’s all they care about. Our intent with the Dow Jones demo was to clearly answer that question— without confusing them in the process.”

She might have something there. And if her company’s current flurry of proposals and bids bear fruit, the “offline demo” may soon become a standard marketing tool of the online industry.

Steven K. Roberts is the author of the soon-to-be-published book, Computing Across America: The Bicycle Odyssey of a High-tech Nomad, as well as numerous books and articles on vaguely related subjects.