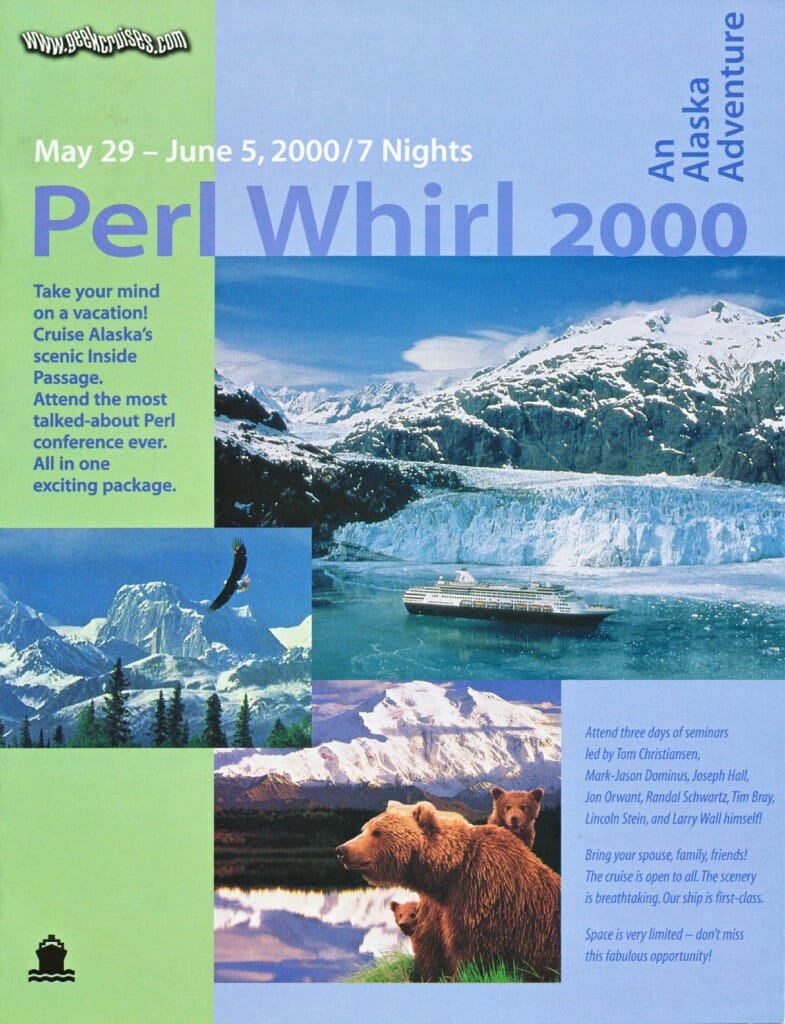 I was originally going to give the various bits of text related to this adventure into separate posts by date, but they would sprawl from a June 1999 bit in the Seattle Weekly to articles in late 2000 about the event. Instead, I’ll collect it all here, since it really is one cohesive tale.

This was a magical week… the first of the Geek Cruises created by Neil Bauman in association with Holland America cruise lines. Basically, his idea was to gather a huge tribe of geeks with some strong interest in common, hustle them aboard a ship, and send them off on an adventure that happens to include educational sessions and parties. It turned into a huge phenomenon, and I was privileged to go on three of them. This was the first, and I was in the company of the true luminaries of the Perl Language.

This page will carry a mix of snippets related to my personal connection with this event. First, here is a live radio interview on KFNX in Phoenix with Neil Baumann, airing on March 24, 2000… about 2 months before the Perl Whirl Geek Cruise.

From C to Shining Sea

A cruise line reaches out to the coding community.

WHAT DO YOU call 400 geeks on a cruise through Alaska’s Inside Passage? Wasted scenery? The Code Boat? Neil Bauman is expecting 400 code wizards and the people who love them to be afloat for Perl Whirl, scheduled to sail from Vancouver in May 2000.

Perl is one of the languages underpinning vast sections of the Web, powering everything from order forms to serious interactivity. The tour is designed to develop skills in intermediate-to-advanced coding and entry-level mellowing. Geeks aren’t usually known for their ability to vacation restfully, which Bauman says makes for domestic hardships. “Certainly for geeks’ significant others, vacationing is a moderately frustrating experience,” he says. “Geeks tend to bring tech manuals along.” While code jockeys spend time programming XML APIs, sweeties can enjoy the scenery and presumably form support groups with other code widow(er)s. In addition, there’s always the possibility of geek love: Bauman reports that many registrants are single— and female.

Of course, as geeks adapt to the cruising lifestyle, the cruise line must adapt to geek culture. When confronted with the Holland- America formal-dinner dress code (suits for men, cocktail dresses “for the ladies,”), cruise organizers countered with a proposal for Wizards’ Night, decreeing clothing, a festive attitude, and no bare feet. The proposal has since evolved into a full-on Wizards’ Night Out, which promises to be rather like the prom with added networking.

The seven-day cruise will include 17.5 hours of classroom time on such topics as JavaScript, CGI, and data-backed Web sites. In addition, several stars of the Perl universe will be on hand, including Larry Wall (who wrote the language), Tim Bray, Jon Orwant (speaking on “Rebuilding Post-Apocalyptic Civilization with Perl”), and fabled techno-nomad Steven Roberts, rumored to be launching a 14,000-mile “Microship” ocean trek from the cruise itself.

But can true geeks survive a whole week of leisure? Bauman hopes to provide a smallish onboard network as well as ship-to-shore phone connections. After all, no matter how relaxed the geek, “It’s not a vacation without e-mail access.”

And so it came to pass. Somewhere I have photos and a few other mementos, which will be pasted here when they turn up, but here are a few  links to other accounts:

Steve Silberman wrote a long and detailed article for Wired, called Scripting on the Lido Deck. If you want to just skip to the bit about me, it is on page 8, but the whole thing gives great insight into the Perl culture.

Adam Turoff did an excellent article: Adventures on Perl Whirl 2000

Tim Bray has a delightful piece at O’Reilly: Big Ship, Many Geeks

Randal Schwartz has an album of about 1,400 photos

I also gave a talk on the Java Jam, which covered the Western Caribbean. My presentation was on November 5, 2000: