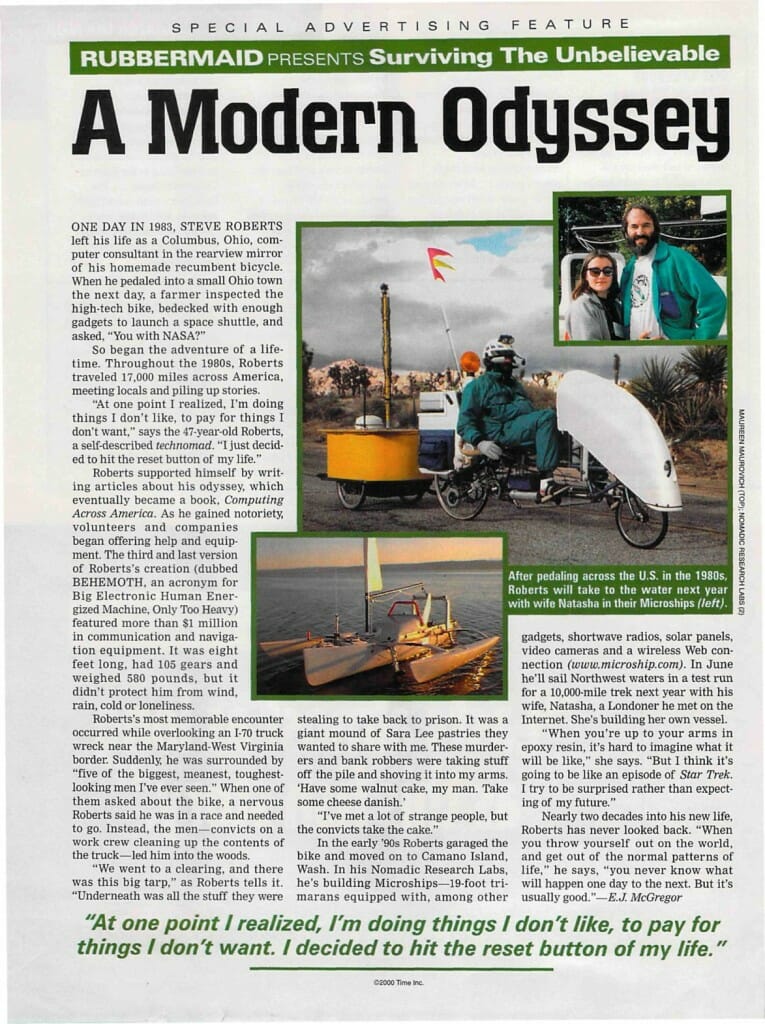 This is quite out of context with my normal media appearances over the years; I have never thought of myself as an athlete (and certainly not the kind who would be featured in Sports Illustrated). This was part of a series produced by Rubbermaid: “Surviving the Unbelievable.” A bit of a stretch, but sure… why not?

ONE DAY IN 1983, STEVE ROBERTS left his life as a Columbus, Ohio, computer consultant in the rearview mirror of his homemade recumbent bicycle. When he pedaled into a small Ohio town the next day, a farmer inspected the high-tech bike, bedecked with enough gadgets to launch a space shuttle, and asked, “You with NASA?”

So began the adventure of a lifetime. Throughout the 1980s, Roberts traveled 17,000 miles across America, meeting locals and piling up stories.

“At one point I realized, I’m doing things I don’t like, to pay for things I don’t want,” says the 47-year-old Roberts, a self-described technomad. “I just decided to hit the reset button of my life.”

Roberts supported himself by writing articles about his odyssey, which eventually became a book, Computing Across America. As he gained notoriety, volunteers and companies began offering help and equipment. The third and last version of Roberts’ creation (dubbed BEHEMOTH, an acronym for Big Electronic Human Energized Machine, Only Too Heavy) featured more than $1 million in communication and navigation equipment. It was eight feet long, had 105 gears and weighed 580 pounds, but it didn’t protect him from wind, rain, cold or loneliness.

Roberts’s most memorable encounter occurred while overlooking an I-70 truck wreck near the Maryland-West Virginia border. Suddenly, he was surrounded by “five of the biggest, meanest, toughest-looking men I’ve ever seen.” When one of them asked about the bike, a nervous Roberts said he was in a race and needed to go. Instead, the men — convicts on a work crew cleaning up the contents of the truck — led him into the woods.

“We went to a clearing, and there was this big tarp,” as Roberts tells it. “Underneath was all the stuff they were stealing to take back to prison. It was a giant mound of Sara Lee pastries they wanted to share with me. These murderers and bank robbers were taking stuff off the pile and shoving it into my arms. ‘Have some walnut cake, my man. Take some cheese danish.’

“I’ve met a lot of strange people, but the convicts take the cake.”

In the early ’90s Roberts garaged the bike and moved on to Camano Island, Wash. In his Nomadic Research Labs, he’s building Microships — 19-foot trimarans equipped with, among other gadgets, shortwave radios, solar panels, video cameras and a wireless Web connection. In June he’ll sail Northwest waters in a test run for a 10,000-mile trek next year with his wife, Natasha, a Londoner he met on the Internet. She’s building her own vessel.

“When you’re up to your arms in epoxy resin, it’s hard to imagine what it will be like,” she says. “But I think it’s going to be like an episode of Star Trek. I try to be surprised rather than expecting of my future.”

Nearly two decades into his new life, Roberts has never looked back. “When you throw yourself out on the world, and get out of the normal patterns of life,” he says, “you never know what will happen one day to the next. But it’s usually good.”