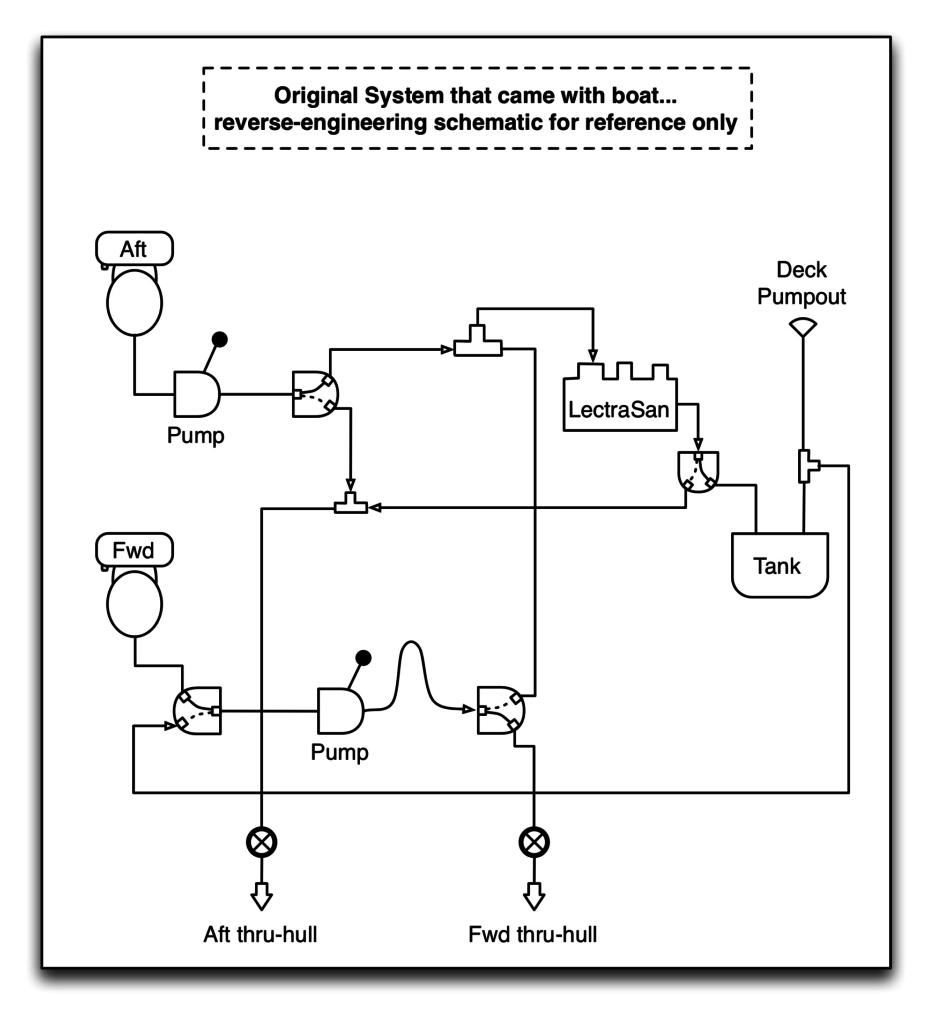 With departure from the marina looming rapidly, certain things have been burbling to the top of the to-do list… one of which is having a legal and functional sewage system. The ship came equipped with both Type I and Type III marine sanitation devices; the former a treatment system that discharges sterilized waste, and the latter a holding tank for use in No Discharge Zones.

The trouble is, the tank had apparently never been used, and the treatment system (a vintage LectraSan) was blinking its unhappy yellow “extended cycle” LED… meaning, presumably, that something was amiss. Coupled with four unlabeled Y-valves and a lack of documentation, we decided to convert the forward head to a dead-simple system: direct pipe to a new tank that could be either deck-pumped or macerated overboard when over 3 miles offshore. The aft head would be moved to the TBDWL category (To Be Dealt With Later), possibly to be the site of a composting experiment after this short sailing season gives way again to the cold short days of the Pacific Northwet.

All the new parts arrived at the plumber’s shop, but he just took off for Europe and we are nearing a departure deadline. So last night we made a much more serious attempt to reverse-engineer what is already aboard, and discovered in the process that many of the initial assumptions were incorrect:

This will of course be redrawn somewhat more professionally, but I thought you would find amusement in the tangle of real-time notes (reflecting as they do the equally obfuscated reality). This information was extracted from the boat through many hours of crawling into impossible spaces, gripping flashlights in teeth, reaching deep into nests of umbilici and shooting blindly with the digital camera, tapping and tugging on hoses while the other person listens with stethoscope, cycling Y-valves and thru-hulls then seeing what happens, peering overboard while flushing, and no small amount of head-scratching.

What it reveals is kind of entertaining, and although the tank is small and the LectraSan still blinking yellow, it might get us through the season with a bit of maintenance work. Basically there’s a valve under the V-berth that determines whether the forward pump draws from the head or the tank, another under the settee that pipes the result of that overboard or to the LectraSan, a third near the aft head that steers its effluent likewise, and a great loop-closing fourth that directs the treated waste either out to the sea or into the holding tank. The latter is widely regarded as pointless, since it will not stay sterile, but it’s an interesting work-around for No Discharge Zones.

I guess the good news is that it is now much less mysterious, which means we have a fair chance of using it as it is (at least during the upcoming shakedown cruise). Some photos from last night:

Hmmm, I wonder where this one goes…

The small 20-gallon tank is behind the deep freezer, and opening the space reveals the area where the new communications console will be installed…

Ah, the joys of messing about in boats!

Footnote Jun 27 (while trying to fix a persistent atom/RSS bug that apparently has my feed frozen in 2006… apparently site feeds do not work with private or FTP-hosted blogs, which this is): The LectraSan is not cooperating, and I’m starting to see why there is such a love/hate relationship with them among cruisers. At the moment, my emotion is not a warm one… about the sewage OR the feed.

Posted in Nomadness blog
← RenamingWorking Aboard →