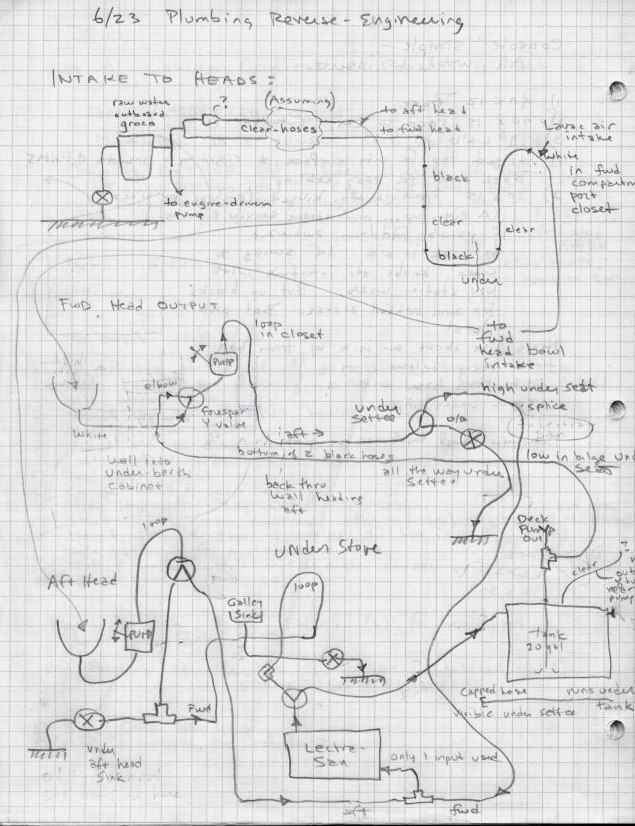 All those pithy aphorisms about boats and expenses really are true. I expect this with new nautical gizmology, of course – loading ‘er up with NavNet 3D, communication, and NMEA 2000 goodies involves enough money to buy another sailboat – but even the pedestrian stuff involves one gotcha after another.

Take plumbing, for example. Not the most interesting topic, but as we get closer to taking off it became clear that, at a minimum, we should reverse-engineer the tangle of hoses between heads and thru-hulls just to make sure that waste ends up where it should. After a few hours of investigation and no help from the former owner, it appears that this is what we have: two Lavac heads (good) with two Y-valves each (hmmm) allowing a choice of three poo-destinations… direct overboard (OK offshore), LectraSan processing and then overboard (mostly illegal inshore), and mystery inaccessible 20-gallon holding tank with only deck pumpout (bad enough that the previous owner didn’t use it). In other words, the system sucks… and I certainly would have appreciated hearing about this from the surveyor as it would have been a negotiating point!

So the latest addition to the project list is a new 30-gallon holding tank under the forward berth, to which the forward head is pumped by default. It can be emptied via deck pumpout or macerator pump overboard, and will have an inspection port, vent, and level sensor. (Even getting to the existing one would involve invasive surgery, so we’ll just seal it off and call it a flotation compartment.) The original system of two widely separated heads sharing a LectraSan was dubious to begin with, and the little sewage-processing machine hasn’t worked since I bought the boat, so that’s going away as well.

One thing the surveyor did notice and communicate to the insurance company is that the boat has a TEE in the propane line after it enters the living space… a no-no these days per ABYC standards. It also has a Bosch demand water heater with standing pilot, now illegal. So those are both going away, the propane is being moved to a deck box with a single line to the galley stove, and a new water heater that meets current standards is being installed in the shower compartment.

I really prefer the fun stuff, all of which is either in progress or on order… field radio pack, communication console, NMEA 2000 network, Furuno NavNet 3D system. Even packaging the mobile lab and provisioning the galley are fun, and feel like progress toward launch. But re-doing a sewage system to be legal and functional is a constant reminder of the perils of boat-buying and the general uselessness of brokers.

Meanwhile, it’s finally just starting to feel like Springtime here in the northwest, and what I really want to do is go sailing. All of this should have been done during the grim demotivating winter that seemed to drag on forever, but you know how that goes… over 6 months have passed with the boat in a slip, and we’re just now getting the infrastructure up to snuff!