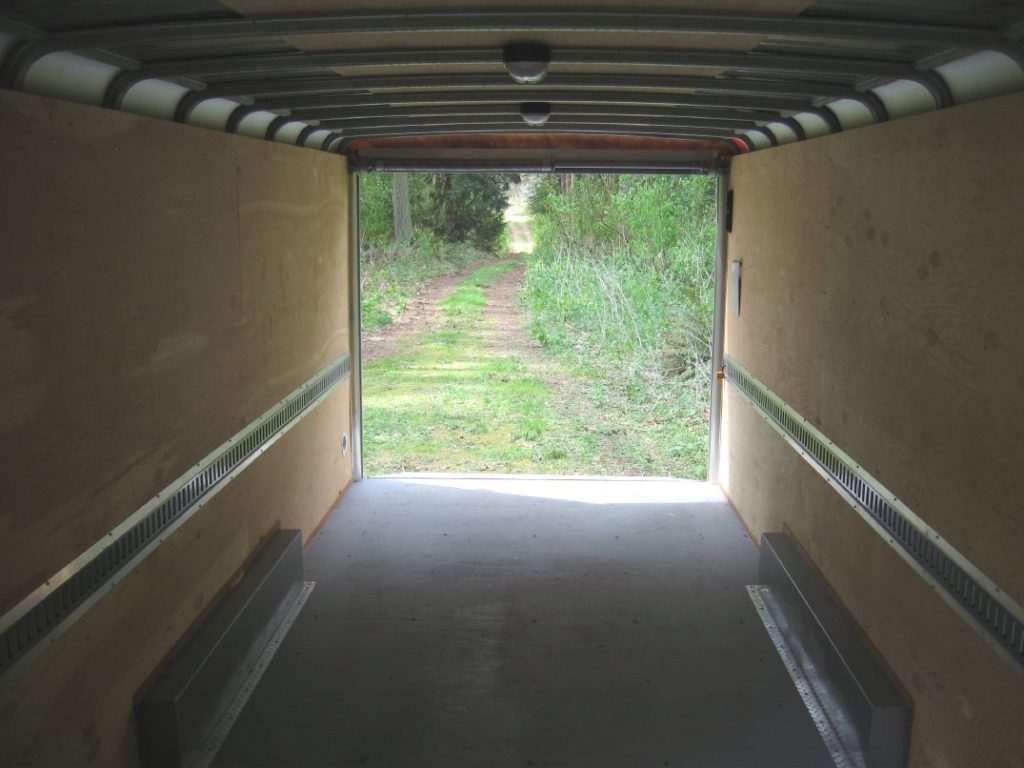 NOTE: This post was written at the beginning of the mobile-lab project; I later did an article that covers Polaris in more detail.

Here’s a bit of technomadic geekery that has thrice attempted to burble to the foreground, each time falling back into obscurity as I chased more delicious obsessions like boat acquisition, network design, and even the occasional adventure. (Remember adventure? This song’s about adventure…)

I’ve moaned a lot lately about the logistically absurd situation here, despite having what appears on the surface to be an optimum playground in the form of a shop three times the square footage of my house:

I have lots of room to play and no shortage of tools, but it’s a 3-hour round-trip drive to the boat, and with a daunting list of mostly-hard projects, that translates into a level of inefficiency that is intolerable. It goes something like this:

Arrive at boat, check lines, do a once-over. Tweak the to-do list. Get email. Pick the first project, drag out the tools, and start making a mess. Encounter a show-stopper like a wrong part or missing cable and pen a notebook entry for the next trip. Websurf. Eat. Pick another project, and proceed until I need something else from home. Visit with a neighboring skipper, have a drink, crawl into berth. Get a caffeinated start, try again, make a better list or some drawings, then head back to the lab with great intentions. Spend 2 weeks doing everything other than urgent not-so-fun projects, blog about it, feel the urge to check on the boat, update list. Repeat.

As the months pass, technology evolves just fast enough to keep me sniffing after ever more entertaining ways to layer gizmology onto my hearty steel ship. The catch is that I would like to start full-time voyaging while still spry enough to clamber to the foredeck in a blow. So last week, while driving around Port Townsend looking at alluring facilities close to a reserved 50-foot slip in a much-loved spot, I started getting the sense that I was off on another tangent… I don’t need real estate; I need wheel estate.

Unless optimum digs magically materialize in parallel with some moneyed soul who wants what I have so I can have what I want, I’m back-burnering the shop quest and committing myself to whatever focused effort is necessary to get through this phase. And since I can’t bring the 18-ton boat to the lab, I guess I’ll have to bring the lab to the boat.

This is not a new idea here, and you can be excused for rolling your eyes if you’ve seen similar logic in my long trail of maunderings. In fact, I started this back in 2005, when I bought a 24-foot Wells-Cargo trailer (my third since 1991) to haul stuff cross-country after shutting down the old family home in Kentucky. It sat beside my house for 3.5 years, getting pawed through occasionally for eBay fodder, but not actually emptied until this week:

Once cleared, I started pulling off the walls and adding insulation… splitting R-13 rolls to half their native 3.5″ thickness, removing the plywood to expose metal skin, and sliding batts behind the E-track all the way to the floor. The difference is acoustically dramatic, and will doubtless contribute to thermal comfort down the road:

The contraption really is an erector set, as far as simplicity is concerned; having it apart makes me cringe at what it cost, especially when I observed significant rust on some of the ribs from daylight-gaposis in the outer panels down near the wheel wells. Nothing a little sealant and a few pop rivets can’t fix, but I’m keeping a close eye on things… and am no longer intimidated about chopping holes where needed.

Some of those will be up at the bow, where I opted for a fiberglass Nose Cone after having witnessed a compelling desktop aerodynamic demo long ago at their plant in Ogden, Utah. When I added one to my first trailer, fuel economy of the dually diesel tow vehicle took a 2 mpg jump and I became noticeably more stable in the blast of passing semis. Current plans don’t involve cross-country jaunts, but I need a place to install all the systems without having to build enclosures. The Nose Cone region should be perfect, protecting a big hunk of wall with plenty of clearance behind… and RF-transparent for the antennas.

Hacking there should be easy, and I’ll just cut away the original skin to simplify mounting on the plywood wall. For some strange reason, they removed all the screws under there (from skin to frame) before installing the nose cone, so this process will eliminate the mysterious floppy rattling sheet-metal noise that drove me crazy on the trip across the US… or even when just walking around in the trailer. Can’t imagine why they would do this unless there was screw shortage that week… not a single screw remained inside the Nose Cone region, though they had clearly been there to begin with:

Anyway, a hinged plywood panel on the front wall will carry the display for the Prosine 2kw inverter/charger harvested from the boat upon installation of the Outback system, a Trace C-40 charge controller for the 120-watt PV array on the roof, AC and DC breaker panels, general lighting/ventilation controls, LCD for the Arduino status monitor, an IP network camera, router with WAN access, security sensors, and so on.

AC comes from a shore-power cable, the inverter, or Honda 2KW genset; it is used for the power tools, fluorescent lighting, soldering station, oscilloscope, and a space heater. DC is from the boat’s old deep-cycle battery bank (charged by Prosine, solar array, or genset), and powers all the low-level lighting, radio gear, video, security, network, and other gizmology. Fortunately, it appears that I can do most of this with stuff laying around the lab or harvested during Nomadness upgrades.

The same level of “repurposing” extends to the furniture, some of which traveled over 100K miles in the previous incarnation of the mobile lab (nearly 20 years ago!). My sophisticated CAD model (Cutout-Aided Design) shows the first-pass layout, at a scale of one division per foot:

Basically, what I’m doing here is extracting the nucleus of my big sloppy 3000-square-foot shop and compressing it into about 10% of that space. It won’t be painless, but as I walk around the former, I realize how little of the stuff is really in current use… and how much it has come to feel like an anchor. With the exception of big messy jobs like enclosure fabrication and redneck bow-thruster welding, all upcoming boat projects can be completed in this mobile lab. Parked close to the boat, Polaris should eliminate the insane 109-mile context-switch that currently takes place between every fitting and fabbing cycle.

It should also be useful long-term, not only for ongoing Nomadness development, but also for consulting spin-offs that may occur once the Shipnet is blinking.

By the way, I found a couple of old photos that really needed to be scanned and included here. This is the unimaginatively named Mothership, circa 1992, during a 3-year post-pedaling speaking tour around the US with BEHEMOTH (the final version of my geeked-out recumbent bicycle). I built a mobile lab and office into a 20-foot Wells-Cargo trailer (4 feet shorter than my current one). So this is pretty familiar territory, and I’m going to reuse that homebrew inventory-storage workbench visible here:

The bike was well tied-down with slotted floor fixtures for the tires and ratchet straps engaging recessed rings. Those ropes from the ceiling are part of a little hack that let me sit on the bike (where the stereo sound was best) and use the laptop on a fold-down work surface. Underway, retaining rods kept all the inventory bins under control; plastic panels locked over the little parts cabinets to do likewise. The back door opened to the side, so I built a bike ramp that was stored in strut channels bolted underneath (always a nuisance). The office area was at the front end:

This system, like the original Winnebiko, was a sleek and elegant solution to the problem of maintaining technical productivity while on the road full-time. The next one, like BEHEMOTH, pushed the practicality envelope a bit… 44 feet of fifth wheel that dwarfed my old pickup truck:

Now we’re back down to a reasonable scale, and I’m pretty sure I can avoid the temptation to get overly geeky with what is essentially a temporary support facility for the ship. Dear readers, do smack me upside the head in the comments if I get too carried away with this… I just need to get ‘er done and tackle the to-do list!

In case you’re wondering why I’m calling the mobile lab Polaris, it is not an acronym (nor even a backronym, though that is inevitable). You may recall that a small dog named Zubenelgenubi has recently been inflicted upon our once-placid environs, and while he is a cute li’l bugger, he has reduced the signal-to-noise ratio around here dramatically. Since he was named after the navigational star with a sidereal hour angle (SHA) of 138 and a declination of South 16°, and since I first started fantasizing about taking the lab to the boat one morning while Zuby was alternating between chewing on my shoe and bouncing off the walls, I thought I’d find an antipodal name for the new rig.

Acamar was the closest, favoring the azimuthal coordinate (SHA 316 and Dec N 40°) and it is even at the other end of the group of 58 navigational stars alphabetically, but it is just too obscure sounding to make a good rig name. Menkar (315 & N 4°) was next, but that sounds like, well, some male automotive fantasy. Polaris has a nice SHA about 180° away from the Zoob, though its Declination is naturally right about at the zenith (only 42′ away from the celestial pole) as one would expect and thus its SHA is really in the noise. Eventually the 25,800-year precession of the equinoxes will cause this to stray, of course, but by then it will no longer matter.

Anyway, Polaris makes a suitable name for the lab, and the backronymic possibilities are legion. Sometime when I’ve been swilling trimethylxanthine, I’ll conjure one.

The Boat Hacking book is moving slowly, since the system that it is its primary focus is doing likewise… but I’m now in the process of producing a print edition of Reaching Escape Velocity (bombastically subtitled “Launching gonzo engineering projects with sponsors, media, volunteers, and other potent forces”). I’m using CreateSpace for this, but with my own ISBN block and Library of Congress control number. This is a bit of a learning curve, like everything, but at 77 pages it is a low-stress way to learn the process; I have quite a backlog of bookable material, and have been looking for a painless way to launch titles without having to tie up dwindling funds in inventory.

Heck, there will probably even be one about building and outfitting a mobile lab… but in the meantime, here is a much more detailed article about Polaris.

Cheers from the Nomadhouse,
Steve