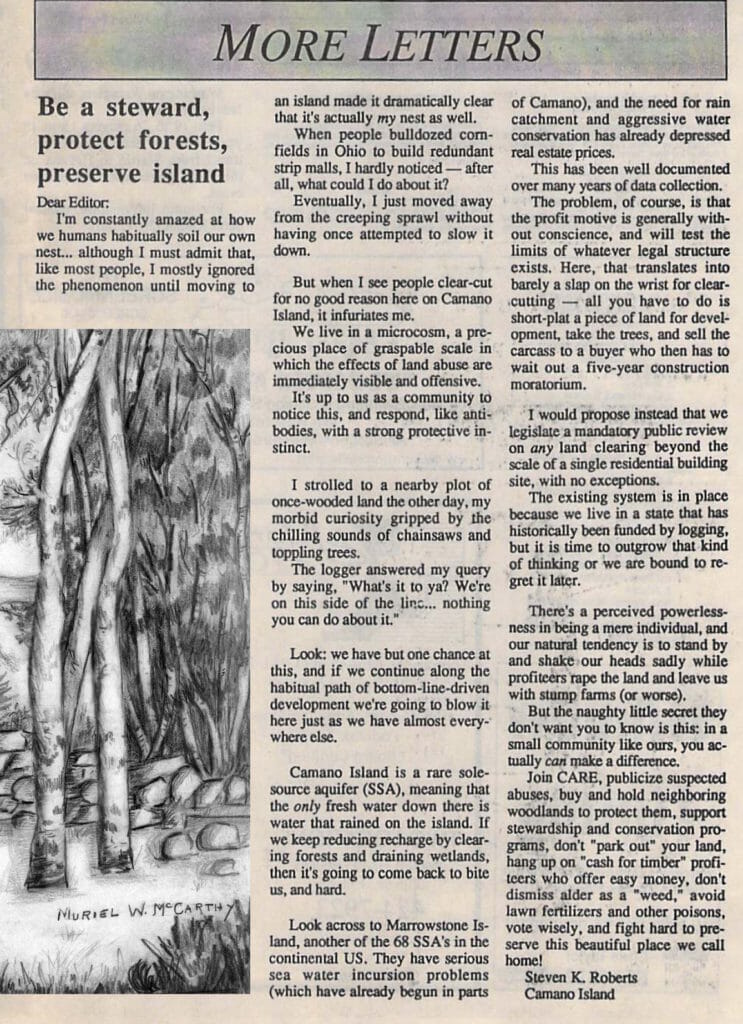 This is one of my letters to the editor of the local newspaper during my protracted attempts to scale back the careless resource-harvesting of Camano Island, where I lived for 13 years. This was mostly a time of total immersion in the Microship project, but protecting the quality of life was a major priority. The art by my maternal grandmother Muriel McCarthy covers an unrelated editorial cartoon.

I’m constantly amazed at how we humans habitually soil our own nest… although I must admit that, like most people, I mostly ignored the phenomenon until moving to an island made it dramatically clear that it’s actually my nest as well.

When people bulldozed cornfields in Ohio to build redundant strip malls, I hardly noticed — after all, what could I do about it?

Eventually, I just moved away from the creeping sprawl without having once attempted to slow it down.

But when I see people clear-cut for no good reason here on Camano Island, it infuriates me.

We live in a microcosm, a precious place of graspable scale in which the effects of land abuse are immediately visible and offensive.

It’s up to us as a community to notice this, and respond, like antibodies, with a strong protective instinct.

I strolled to a nearby plot of once-wooded land the other day, my morbid curiosity gripped by the chilling sounds of chainsaws and toppling trees.

The logger answered my query by saying, “What’s it to ya? We’re on this side of the line… nothing you can do about it”

Look: we have but one chance at this, and if we continue along the habitual path of bottom-line-driven development we’re going to blow it here just as we have almost every where else.

Camano Island is a rare sole-source aquifer (SSA), meaning that the only fresh water down there is water that rained on the island. If we keep reducing recharge by clearing forests and draining wetlands, then it’s going to come back to bite us, and hard.

Look across to Marrowstone Island, another of the 68 SSA’s in the continental US. They have serious sea water incursion problems (which have already begun in parts of Camano), and the need for rain catchment and aggressive water conservation has already depressed real estate prices.

This has been well documented over many years of data collection.

The problem, of course, is that the profit motive is generally without conscience, and will test the limits of whatever legal structure exists. Here, that translates into barely a slap on the wrist for clearcutting — all you have to do is short-plat a piece of land for development, take the trees, and sell the carcass to a buyer who then has to wait out a five-year construction moratorium.

I would propose instead that we legislate a mandatory public review on any land clearing beyond the scale of a single residential building site, with no exceptions.

The existing system is in place because we live in a state that has historically been funded by logging, but it is time to outgrow that kind of thinking or we are bound to regret it later.

There’s a perceived powerlessness in being a mere individual, and our natural tendency is to stand by and shake our heads sadly while profiteers rape the land and leave us with stump farms (or worse).

But the naughty little secret they don’t want you to know is this: in a small community like ours, you actually can make a difference.

Join CARE, publicize suspected abuses, buy and hold neighboring woodlands to protect them, support stewardship and conservation programs, don’t “park out” your land, hang up on “cash for timber” profiteers who offer easy money, don’t dismiss alder as a “weed,” avoid lawn fertilizers and other poisons, vote wisely, and fight hard to preserve this beautiful place we call home!