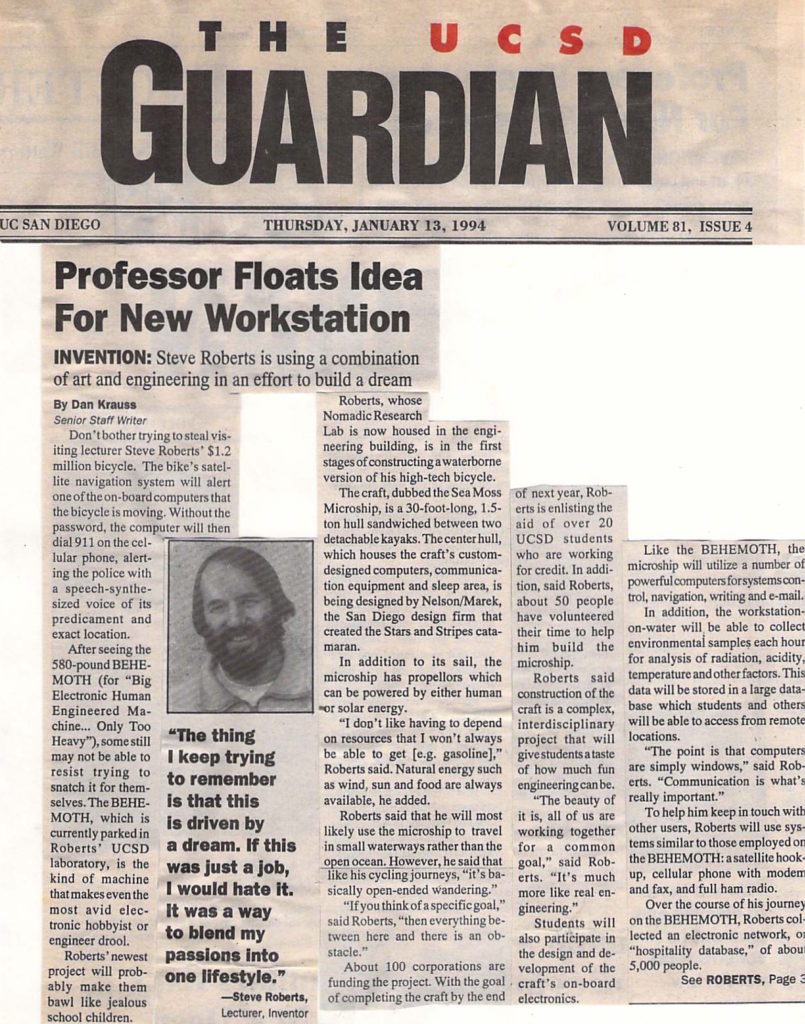 I landed at UCSD to build the Microship in the fall quarter of 1993, and by early ’94 there was a little flurry of media coverage. This is from the campus newspaper. A 15-minute video of engineering student discussion from about this time is embedded in the story.

INVENTION: Steve Roberts is using a combination of art and engineering in an effort to build a dream

Don’t bother trying to steal visiting lecturer Steve Roberts’ $1.2 million bicycle. The bike’s satellite navigation system will alert one of the on-board computers that the bicycle is moving. Without the password, the computer will then dial 911 on the cellular phone, alerting the police with a speech-synthesized voice of its predicament and exact location.

After seeing the 580-pound BEHEMOTH (for “Big Electronic Human Engineered Machine… Only Too Heavy”), some still may not be able to resist trying to snatch it for themselves. The BEHEMOTH, which is currently parked in Roberts’ UCSD laboratory, is the kind of machine that makes even the most avid electronic hobbyist or engineer drool.

Roberts, whose Nomadic Research Lab is now housed in the engineering building, is in the first stages of constructing a waterborne version of his high-tech bicycle.

The craft, dubbed the Sea Moss Microship, is a 30-foot-long, 1.5-ton hull sandwiched between two detachable kayaks. The center hull, which houses the craft’s custom-designed computers, communication equipment and sleep area, is being designed by Nelson/Marek, the San Diego design firm that created the Stars and Stripes catamaran.

In addition to its sail, the Microship has propellors which can be powered by either human or solar energy.

“I don’t like having to depend on resources that I won’t always be able to get [e.g. gasoline],” Roberts said. Natural energy such as wind, sun and food are always available, he added.

Roberts said that he will most likely use the Microship to travel in small waterways rather than the open ocean. However, he said that like his cycling journeys, “it’s basically open-ended wandering.”

“If you think of a specific goal,” said Roberts, “then everything between here and there is an obstacle.”

About 100 corporations are funding the project. With the goal of completing the craft by the end of next year, Roberts is enlisting the aid of over 20 UCSD students who are working for credit. In addition, said Roberts, about 50 people have volunteered their time to help him build the Microship.

Roberts said construction of the craft is a complex, interdisciplinary project that will give students a taste of how much fun engineering can be.

“The beauty of it is, all of us are working together for a common goal,” said Roberts. “It’s much more like real engineering.”

Students will also participate in the design and development of the craft’s on-board electronics.

Like the BEHEMOTH, the Microship will utilize a number of powerful computers for systems control, navigation, writing and e-mail.

In addition, the workstation-on-water will be able to collect environmental samples each hour for analysis of radiation, acidity, temperature and other factors. This data will be stored in a large database which students and others will be able to access from remote locations.

“The point is that computers are simply windows,” said Roberts. “Communication is what’s really important.”

To help him keep in touch with other users, Roberts will use systems similar to those employed on the BEHEMOTH: a satellite hook up, cellular phone with modem and fax, and full ham radio.

Over the course of his journey on the BEHEMOTH, Roberts collected an electronic network, or “hospitality database,” of about 5,000 people.

But after several years of travel on three generations of computerized bicycles, the allure of the open road has faded. Tired of asphalt culture and bad drivers, Roberts “got burned on the highway.

“It was exhausting having to give a lecture every time you came out of a restaurant,” Roberts said.

Once, he said, a farmer asked him if he was with NASA. Roberts said he was testing a lunar excursion module. The farmer nodded his head in understanding.

Then, said Roberts, a friend turned him on to the sport of sea-kayaking. This new hobby gave Roberts the idea for the Microship.

“The thing I keep trying to remember is that this is driven by a dream,” Roberts said. “If this was just a job, I would hate it.”

This same passion was what motivated Roberts over a decade ago to leave his suburban life and become a “high-tech nomad,” cycling a total of 17,000 miles on his hi-tech vehicle. “It was a way to blend my passions into one lifestyle,” Roberts said.