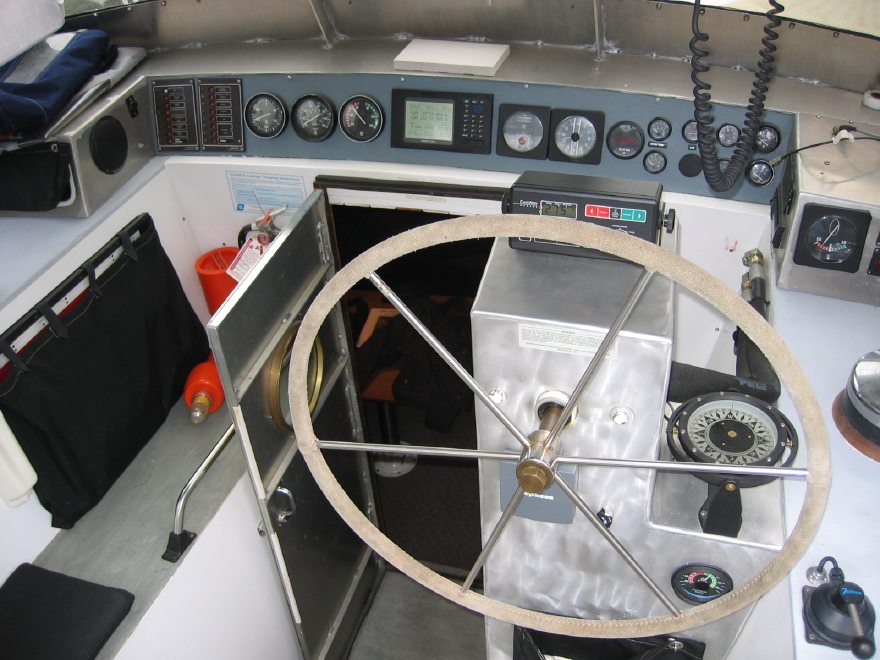 I suppose I should take the long view here, and be happy that I got a good education for a mere $3K. I’m now much better equipped to contemplate potential ships, though I must admit that there is a strong sense of letdown along with the unavoidable “what-if” feeling. I’ll always wonder…

Gypsy Spirit is a hearty vessel with very distinctive character, and most of the upgrades and additions over the past few years have been first-rate. The sails are new, and the current owner obviously never hesitated to pay for the best quality hardware. But what I learned from the suite of surveys is that in order to bring her to the point where she is truly offshore-ready, I would be looking at months of hard and expensive work (much of which would have to be done by people charging hefty hourly rates). Beyond that, there is an additional level of preparation, on the same general scale, before she would be ready for the integration of the lab, Shacktopus, and other custom systems. And that still doesn’t include finish work to make her interior at least passably beautiful, though of course that’s a highly subjective term.

The net effect of all this is that I eventually had to start considering this boat in terms of tens of thousands of extra dollars, and, even more painfully, a likely replay of the now-tiresome endless project scenario that I have come to know all too well during the various phases of the Microship quest (now some 14 years along). I don’t thrill to the thought of spending the next year or more in boatyards, writing large checks, and doing messy things like scraping spray-foam from the bilges and somehow removing hygroscopic saline encrustations integrated with absorbent nests of iron oxide, although it doubtless would have had its moments.

I’m not quite back to the proverbial square one, however, as the learning curve has been quite rewarding. My ability to “pre-survey” a candidate vessel is now at a point whereon my impressions are formed more by objective observation than the projection of dreams onto a blank nautical canvas, and I have a much better sense of what questions to ask. I know experts around town, and have seen first-hand some of the politics and interpersonal dynamics in the industry (quite capable of yielding dangerously misleading results). And I’ve gotten much more hard-nosed when it comes to the business aspects.

It will be interesting to see what happens with Gypsy Spirit – I’m convinced she has an interesting future, and there’s a lot of boat there. But there’s also over $40K worth of essential work to be done that we actually know about (rig, engine, batteries, and various repairs), not including the things that are still mysteries… or the other things that are required before actually cruising. The weirdest thing is the realization that I’m the only one with all this information (besides the surveyor, who has seen the reports on rig/engine/power/hull and incorporated them into his report). The boat thus goes back on the market with the same asking price and description… while I feel a sort of strange loyalty to the broker and sympathy for the seller that keeps me from publicizing the results of my research in more explicit detail.

Ah well. All part of the adventure, I suppose, but now I just want to find the FAST-FORWARD button. Starting over, driving around looking at boats, spending hours doing searches on Yachtworld, reading, making checklists, calling people in the business… it’s all so damned abstract compared to what I expected to be doing about now, which has a lot more to do with the immediate logistics of boat ownership and outfitting than with noodling over cutter vs ketch, steel vs fiberglass, Yanmar vs Detroit, and monohull vs catamaran. But in the long run, I think I dodged a bullet.

Ultimately, the ship to be named Nomadness is going to be the substrate for an extensive suite of tools for mobility, self-sufficiency, and communications… so I can’t let myself be seduced by the sexy “workboat patina” of aluminum and stainless that tugs at these old geek heartstrings. I also must insure that the projects (inevitable on any boat) need to be not only congruent with my passions but also finite. The whole point, after all, is reaching escape velocity, and one cannot do that with a welding torch clutched in one hand and a checkbook in the other.