This article appeared just about at the end of my first 10,000 miles. I had landed in San Clemente for a while to write the Computing Across America book, and it was a time for synthesizing what this all had meant… although one significant leg of the journey remained (continuing up the West Coast to land in Silicon Valley, or maybe press on to Seattle). I did not yet know this was just the first of three trips, with ever-more-elaborate bike versions.

This story focuses on the remote-work aspects, which were of huge significance at this time in history. It was a new and rather scary concept, with people still arguing over whether one could effectively work at home, never mind while traveling! This monthly publication ran from 1984 to 1999.

It’s always exciting to hear about someone who does what most of us only dream about. It’s even more exciting when there’s a lesson to be learned about telecommuting at the same time.

The newsletter recently interviewed Steve Roberts, a 32-year-old journalist in the middle of a bicycle trip around the US. We caught up with him for a phone interview while he was spending some time in Los Angeles; the initial contact and the interview planning was done with Roberts on the CompuServe computer network.

As of February 17 Roberts had covered 8600 miles across 21 states since he started out in September 1983. He rides a specially-constructed recumbent bicycle (that allows him to ride while reclining) that’s equipped with a Hewlett-Packard 110 portable PC, a CB radio, a solar panel to charge the batteries, plus a tent, clothing, and lots of other gear.

Roberts is perhaps the ultimate remote worker. He writes a regular column for CompuServe’s user magazine and is writing a book to be published in January 1986 entitled Computing Across America. He wrote an article last year entitled “Work at Home? Work Anywhere!” in which he talked about the necessary ingredients for his form of remote work, and showed how work at home is really only one form of remote work.

He identified four key elements: a portable computer, a “robust network” that links that computer to everywhere else, a “base station” which is a form of an office that is the infrastructure for the remote worker, and a “uniface” who is responsible for running the base station.

This uniface (short for “universal interface”) is the person who, as Roberts says, “coordinates all communications and helps you present the illusion of stability to the world.” Roberts pays his uniface a percentage of the revenue from his writing. “The key thing is that percentage because the person ends up sharing my motivations. When I’m out on the road and unable to directly manage someone that really helps.”

The role performed by the uniface is what is often done by a traditional secretary plus quite a bit more. The uniface works more independently even though Roberts is in daily contact via electronic mail. “The way it feels is that I’m using the portable and the network to remotely control that office,” says Roberts. His assistant works in her home and handles the mail, the expenses and income, and many of the routine decisions. “I haven’t written a check or seen an invoice in over a year.”

He adds that “it’s occurred to me that I might want to franchise this idea if this sort of activity [touring the country while working] becomes popular. I could provide all the services for people who want to do this kind of traveling.” He thinks there might be growing interest in this: “the work at home idea doesn’t always work for everyone. The feeling of being chained to a desk doesn’t go away just because you happen to own the desk.”

Roberts identified some more of the specific tasks his uniface handles:

“A lot of it is just emotional support. I just like to sign on and find a message from her even if there’s no news.”

Roberts shared some thoughts on the prospects for remote work in the future.

I think there’s going to be more of an awareness of the [computer] network. Geographic location has a lot of relevance when you’re dealing with hard goods; if you run a punch press for a living it’s hard to be a remote worker. In my case, I live in a very different kind of space; it has nothing to do with the X, Y, and Z coordinates within an office building. It’s the kind of space that exists on a network.

There’s always a chance in a traditional structure that people become geocentric about their own location just because they live there. If someone works for a large firm there’s always a kind of “blinder” effect; if you’re in the Columbus, Ohio office what happens in the Denver office is somehow a little less relevant — even though it shouldn’t be. With a more flexible work location you may see the company as a widely-distributed entity with no clear physical location.

While few telecommuters will go to the lengths that Steve Roberts has, his experience and in particular the “uniface” concept has some application to less mobile remote workers. One of the biggest concerns for telecommuters is the need to stay linked to the office and to be supported at a distance. The telecommuters’ manager might want to re-think the role of the secretary, for example, to have it include a more direct responsibility for support.

This is another case where we can take a lesson from the years of experience in field sales and other outside work forces. Many corporate managers will note a marked difference in the skills and procedures of a secretary to a field sales manager compared to one working for an in-office manager. The latter isn’t less competent — but may have a more narrow set of tasks because of the proximity of the boss. This might suggest that a good person to help in the design and implementation of a telecommuting program is a sales manager’s secretary — a close relation of Steve Roberts’ “uniface”. 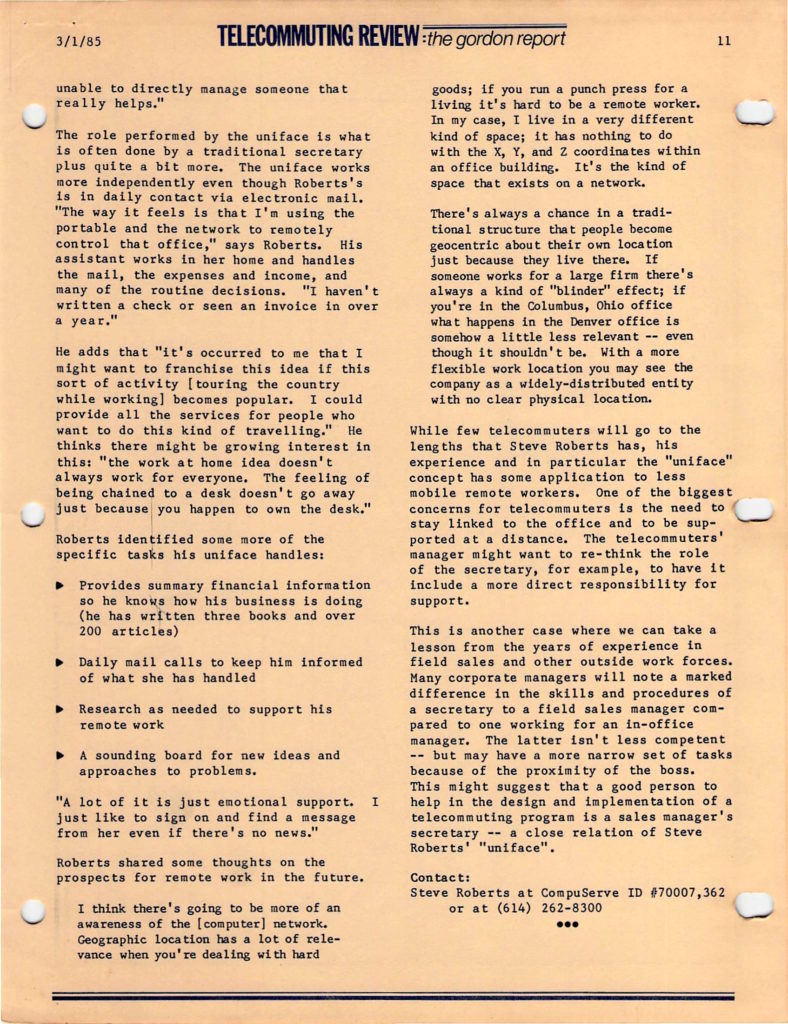