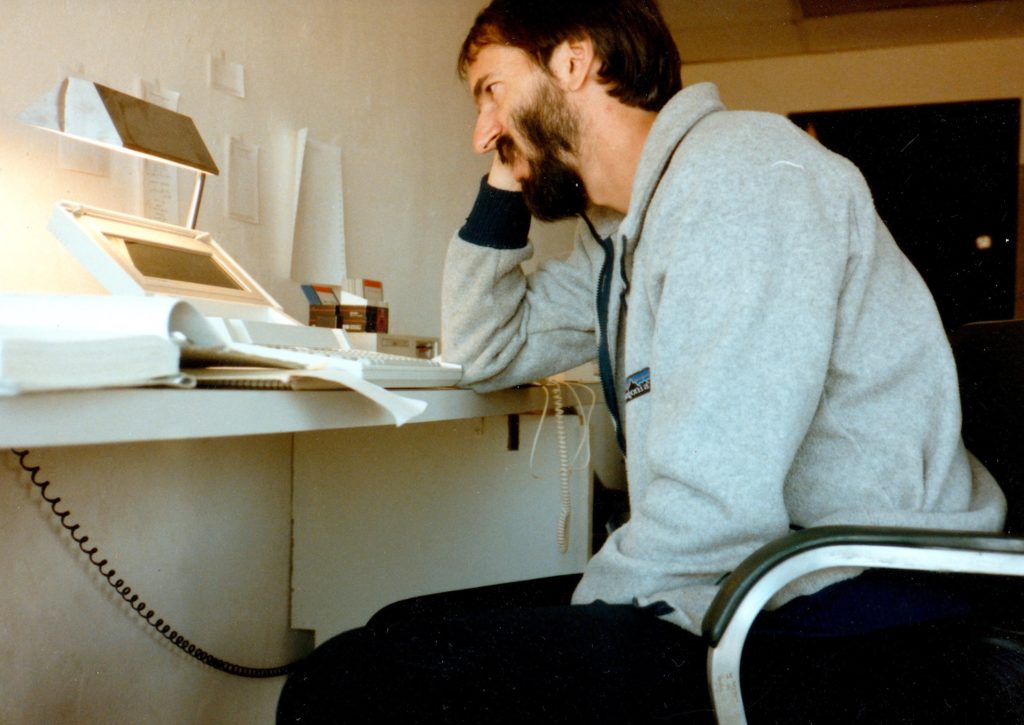 Wait a minute — are you sure we’re talking about the same San Clemente?

—The average San Clemente resident, upon hearing of my experiences here

It began slowly, subtly. First it was just a pair of corduroy pants, then some leather shoes. Then a Mr. Coffee. And then along came the $20 thrift-shop swivel chair, a file drawer, an inkjet printer, a box of computer paper, a phone in my name …

And then the Orange County Public Library card.

It all brings back frightening memories of mortgages and lawnmowers. I glance over at the dusty bike in my San Clemente room and feel something remarkably akin to a <pang> as I remember the road, the excitement of daily change, the speed, and the sweet fresh smell of mountain air (almost impossible to imagine here in southern California). It seems so far away… I could no more hit the road tomorrow than sprout wings and soar out over the Pacific.

I have rented a room in the Ha-Ha House, a place of roaches, transients, losers, drifters, roaches, druggies, boozers, punks, roaches, outcasts, and even a few good-natured normal folks. There are skitterings at night above the stained false ceiling (the slumlord says they’re pigeons; I say they’re hamsters), and everybody shares the same mildewed shower stall. People are carted off to jail occasionally, and tears of frustration at the sheer impossiblity of life are a common sight. The hall is hung with tacky paintings, and there’s never any toilet paper.

A pretty eighteen-year-old moved here from a dry spot under the pier — she’s been “hanging out” since she was fourteen. A frightening guy with a shaved head tells tales of life as a “full-on vandal” and then discusses the Civil War with surprising insight. A brain-damaged paint smoker obsessed with small hard objects used to lose marbles and fishing weights in the shower drain, and we still suffer for it. Furtive strangers slip through, not meeting my eyes; a murderer on parole does meet my eyes and I wish he wouldn’t. An alcoholic woman quite attacked me one night, refusing to take no for an answer, a madman tore into his girlfriend with scissors a few weeks later. And not long ago the SWAT team was called in to overpower a crazed sniper. But the manager is beautiful, as is the young singer and swim coach who lives with me.

Someone down the hall plays electric guitar along with distorted punk music. A carload of Marines roars by on El Camino, and as they muscle through the intersection I hear a beer bottle shatter. KSBR broadcasts a Duke Ellington version of “Penny Lane” all the way from Mission Viejo, and Candy takes a break to hug my neck. To her, the Beatles are a relic of another era.

I kiss her and turn back to the computer, the focal point of a cluttered workspace under a tacky chrome desk lamp. The raw material of this book spills over the makeshift desk, decorates the walls, and renders useless the vibrating vinyl recliner behind me. File folders are labeled QUOTES, PERMISSIONS, RAPS, COMPUSEX, RED ALERT, CURRENT, and so on; signs taped in front of me urge:

A cockroach wiggles her brown antennae halfway up the spine of Percy’s Lost in the Cosmos, pondering the semiotic implications of roach-hood. Nearby, my camera is covered with a layer of dust, though I keep the binoculars clean to watch the swimwear shop across the street.

Yes, I have become almost stable in this home stretch of the book project. I live out of drawers, not packs, and I know the phone numbers of friends. The communal shower knobs are familiar, and last night I even bought a hot fudge sundae on credit at Baskin-Robbins.

This is how a home starts, whether you want one or not. Well, I don’t want one — not yet. And certainly not here.

I’d go mad without the computer.

All of us in the Casa de Ha-Ha need an escape — this is just a cynical caricature of suburbia. Drugs are the easiest way out, of course, especially for those who can’t afford travel. (These days, you can not only freak out, but also amp, zone, jell, bliss, or chill out.) The sporadic bliss of sex is available, but that introduces its own grim complications. Some transcend the ordinary by committing crimes or changing their hair color; others stay so drunk that the dullness of life goes unnoticed… or becomes welcome.

I disappear into the network.

I must look strange to my neighbors. They walk by the door, my fellow denizens — they look in, sometimes calling a greeting, sometimes even pausing to spare-change me or ask how the book’s going. I’m always sitting here in my swivel chair, staring at the flip-top beige box on the desk. I scowl, shake my head, smile, sigh, or laugh out loud at what I see. I must appear insane, obsessed.

What observers cannot possibly understand is that I am not looking at a box at all.

I’m looking through a window.

Through it I see amazing things.

At the moment, for example, I am watching layer upon layer of realization grow around the complex memories of an 8,600-mile bicycle trip. I sit here as deadline looms and gaze through the screen at a fabric woven of strange threads, the warp of sexual yarns and woof of dog tales as much a part of the texture as the actual journey of my spacey shuttle…

With a few keystrokes I can peer into the hospitality files and find all my contacts in area code 408. I can poke around in my collection of old articles and letters or find out whose birthday is next week. All very interesting, but the real magic takes place when I type “terminal” and hear the soft beep that lets me know I’m online.

I rest my arms on the windowsill and call greetings to my friends, release electronic pheromones into the cosmos, and look down on the world rushing by (much more interesting than the endless traffic on Del Mar). Stuck in San Clemente for three months, I have transferred my rootlessness to the network, and my online life has become much more real than the one around me. It’s almost disorienting to walk down the hall.

But then, there’s that other window — the one that looks out over downtown San Clemente, a mothballed remnant of the 1950’s surrounded by winding streets and Spanish architecture.

I’ve arrived, O Macho Cyclists, I’ve done it! I have ridden my bicycle across the US to an honest-to-God southern California beach town. All the signs are there, and they’re nice ones: beautiful women in abundance, skimpy bathing suits, an active surfing culture, sunshine, rocking radio stations. Ah, the California mystique: if I squint, it even appears a sort of paradise.

But when I open my eyes further, I see the rest. Nixon- and nuke-influenced T-shirts. Motorcycles and skateboards. Padlocked toilet paper rolls in public restrooms. Pigeons, bums, and drifters. Mohawked punks in deathy garb, and punk Christians, of all things, replete with ghastly evangelical music and lavender cotton-candy hair. Old people shuffling off to play bingo at the retirement center. A strange old woman with paper money stapled all over her floppy hat; a strange old man who wears radiation deflectors and claims to have invented the RETURN key on the typewriter (although he keeps his on the garage). Earthquake prophets, promising the End — and believers who send their kids to bed with their shoes on so they won’t be barefoot in the rubble. Hard drugs, soft margaritas, gentle gays with refined tastes, tough Marines with loud cars and shiny crotch rockets, alienated teenagers fancying themselves anarchists, and not much technology at all.

This does not match the public perception of Nixonland; my comments, in fact, shock most of the residents here. This Marine base border town is a hotbed of conservative Republicanism — a haven of retirees, transient beach lovers, and L.A. refugees to whom this must seem languid and idyllic. There is money here, but it’s somewhere on the other side of an apathetic mainstream community; there are some extremely intelligent people, but they’re a tiny minority.

This is a city that lobbied for the Nixon Library, a fixture that is as much a source of civic pride as the San Onofre nuclear power plant at the other end of town.

But mostly, this part of San Clemente is a typical southern California beachfront pressure cooker, intense and dangerous. Traffic is fast; tensions run high. And despite the beauty of the beach and the mildness of the weather, hardly a day goes by without words of hostility echoing on the downtown street. I’ve seen four fights between couples, one involving a ten-inch knife. I’ve listened to a tormented soul stand outside his locked apartment door, shaking with rage and withdrawal, screaming at his seventeen-year-old girlfriend: “Let me in, goddamn it! I am not a drug addict!” I’ve seen punks of all hair colors — not bona fide nihilists at all but teenagers in costume. I’ve witnessed con artistry, auto theft, fraud, heroin dealing, child abuse, break-ins, drunken stupors, exhibitionism, faith healings, nose-piercing, auto accidents, human scavenging, and urination in my front hall.

When I tell people in San Clemente that I’m in the Ha-Ha, they look confused; when I tell them about it, they are horrified. “Oh my God, that’s not what it’s like at all! You’re not putting that in your book, are you?”

You should be asking a question by now: “If you’re such a nomadic sonofabitch, Roberts, then why are you still there? In fact, why’d you stop in that zoo in the first place?”

I was taken prisoner by the enemies of change: Friends, Deadlines, and Complacency.

It started in Telluride. I met Drew and Holly, liked them immediately, joined them for food and drink, and put them in my hospitality database. There they stayed for a couple of months as I grappled with Utah and nodded off in the Land o’ Golf.

When I began planning my escape from Palm Desert, I gave them a call. From their invitation to my arrival in San Clemente was a matter of four days. I crashed on the floor for a while but needed to set up an office — so I studied the local newspapers, rented a room from a poisonous harpy, fled that madness two weeks later with a fraudulent forfeit of my rent money, and moved into the Ha-Ha. There’s not much between the couch circuit and the one-year lease.

I have been computing across San Clemente, from Holly to Harpy to Ha-Ha.

It’s frightening what deadlines can do to you. I work into the night, coffee-wired, trying to ignore the sense of living in a cultural nadir. But my friends have saved me — Drew and I discuss life, share meals, and lust like a couple of bright-eyed twelve-year-olds after the latest electronic toys. I work at the library under the warm watchful eyes of librarians young and old, and I even have a few casual friends on the street.

Friends. My lover. My library card. Appliances. They have all come to coddle me like a miniature suburbia, even in this place of madness. Comfort in the Ha-Ha House… I will one day find this incredible.

Candy stirs in her sleep, only one leg covered <soft pang>. It is 4:30 a.m. and I turn to gaze at her as she lies out there in the fringes of my desklight. Hmmm… There are still a few things that don’t work very well over a computer network, magic window or no.