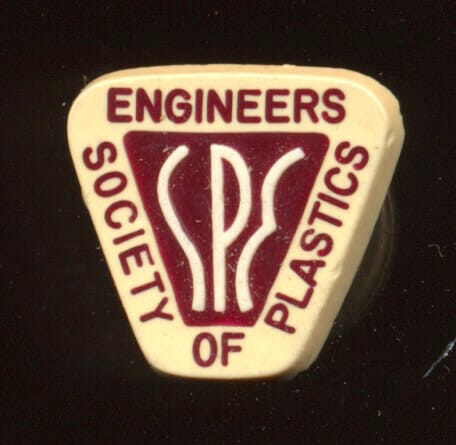 My father, Edward H. Roberts, was a lifelong member of SPE, designing plastic parts and ice cube trays for GE Erie Works in the 1940s and moving on to household refrigeration (AP5) at Appliance Park in Louisville in the early 1950s. Among his effects was a small batch of treasures from the Society of Plastics Engineers, including news of his winning lapel pin design and some related artifacts. This page is a mini-museum of the collection, which includes a Zippo lighter, mugs, ring, key fob, badges, photos, and a feature in the SPE Journal.

The SPE Lapel Pin Design Contest was sponsored in an effort to find a design that SPE members could wear with pride on their lapels, and which would identify the wearer as a member of the Society of Plastics Engineers.

The best of the designs submitted was one sent in by Edward H. Roberts, General Electric Company, Erie, Pennsylvania. The prize money of $50.00 was presented at the Eighth Annual SPE Technical Conference in Chicago.

The designer suggested that the pin be made of a “see-deep plastic with a bright gold or silver SPE raised from the back and with a silver or gold color metal bezel around the plastic. The name ‘Society of Plastics Engineers’ is stamped around the face of this bezel.” The design was made with a reddish brown center background for white initials and a gold bezel with reddish brown lettering.

Mr. M. A. Nichols, President of Manco Products, Inc. has offered to make and donate Tru-cast Beryllium Copper Cavities in which to molt the pin.

Highlighting the eighth annual Society of Plastics Engineers technical conference banquet in Chicago, Jan 17, was the award of a certificate and the $50 cash prize to Edward H. Roberts, Erie Works engineer, for his winning entry in the national SPE lapel pin contest.

The awards were presented to Mr. Roberts by the Plastic Society’s president, Islyn Thomas, before 250 of the country’s leading plastic engineers.

A graduate of the engineering test program in 1937, he was assigned to Erie refrigerator design and by 1942 had assumed charge of all plastic parts.

During the war, Mr. Roberts aided in establishing the mechanical lab in Pittsfield and developed the plastic rocket launcher tube. He then was appointed engineer-in-charge of the rocket launcher plant in Lowell, Mass., and completed the project before returning to Erie in 1945.

Mr. Roberts was one of the original directors of the NW Pennsylvania SPE Chapter, and his winning design was chosen over entries submitted from many of the nation’s outstanding designers, stylists, and engineers.

I was born in late 1952, and my mother had a ceramic kiln… she made some beautiful mugs which I still use aboard the boat 65 years later. This one was a tribute to his SPE pin design:

And one more from many years later, made by Louisville Stoneware:

Finally, a close-up of that 1942 SPE ring in the batch photo above:

NOTE: All this found its way in 2019 to the collection of an SPE member.