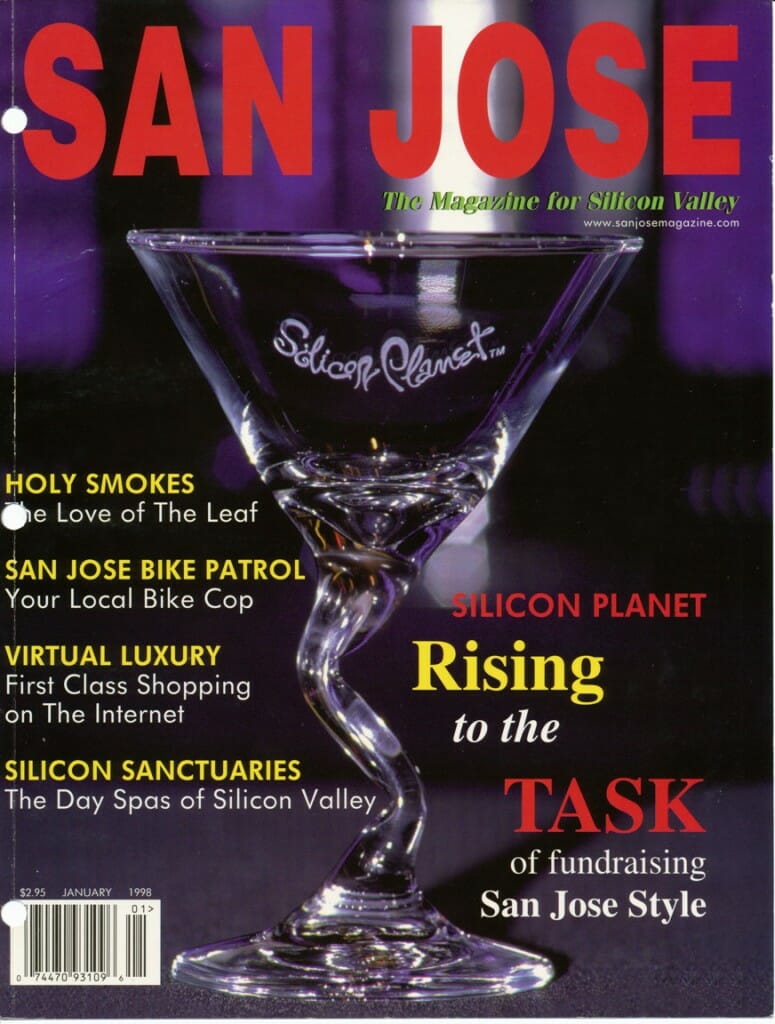 The convoluted trail that led from biking to sailing involved a variety of nautical substrates, lab spaces, partners, and projected itineraries. This article is a glimpse of the beginning of the micro-trimaran project that began during the end of my 2-year stint in a building sponsored by Apple and continued until sometime in 2003. The lab was a grim windowless, fluorescent-lit, relationship-stressing box in the industrial-park jungle of Santa Clara, and just as this article was published we were moving with relief into new facilities in the forest of Camano Island, Washington.

Silicon Valley is a magnet for the technically minded, so it’s no surprise Steve Roberts, founder of Nomadic Research Labs, ended up here. In making his way, he didn’t bother with an airplane, train or car. Instead, the self-made engineer pedaled into town on a 580 pound, 105 speed, computerized, networked, high-tech recumbent bicycle.

Between 1983 and 1991. Roberts’ solar-paneled, satellite-antennaed, stereo-equipped bicycle, affectionately nicknamed the “Behemoth,” took him on a 17,000 mile journey. Starting from the staid confines of the Midwest, he arrived two years ago in the high-tech heart of the West Coast. Ultimately, he fueled the journey with his passions for cycling, writing, technology—and life.

Along the way, Roberts published two books, Computing Across America and Miles with Maggie, both largely penned from the keyboard of his bike. He kept in touch from his techno-mobile via satellite powered e-mail and cell phone. For the last two years, Apple Computer has sponsored his Santa Clara work space. This workspace of walls of plaster lends the slightest hue of an ordinary lifestyle to his existence. But the journey isn’t over.

Inside the confines of his lab, seeds of Roberts’ next adventure are quickly sprouting. He plans to leave Silicon Valley on a boat. Not just any boat. It will be a high-tech, solar- and pedal-powered autonomous mobile information and communication systems platform of a boat. The vehicle will weigh about 600 pounds and have retractable wheels for hauling out and rolling on land. And there will be two of them, one for his partner, videographer Elizabeth Blinov.

By the middle of next year, Roberts and Blinov plan to be off in their matching Microships. Roberts anticipates test runs in the delta and Monterey Bay, after which they will head for his childhood home in Kentucky to launch a journey through eastern inland waterways and up the Atlantic.

Roberts calls himself “technomad.” His mobile platforms are intriguingly autonomous. Yet he is the first to admit that the 108 or so sponsors who have given him equipment and work space, and the many volunteers on the project are essential in making his dream a reality.

As Apple’s sponsorship of the lab comes to an end, Roberts is scrambling to find a sponsor for new working digs. Meanwhile, he and Blinov, with a host of volunteers, including fiberglass experts Bob Stuart and Mark Coulter, are frantically busy outfitting the Microships for their maiden voyage. It probably won’t be the last time Roberts finds himself working on a thread. And it isn’t the first time he’s gathering enough threads to spin the kind of lifestyle many engineers just dream about.