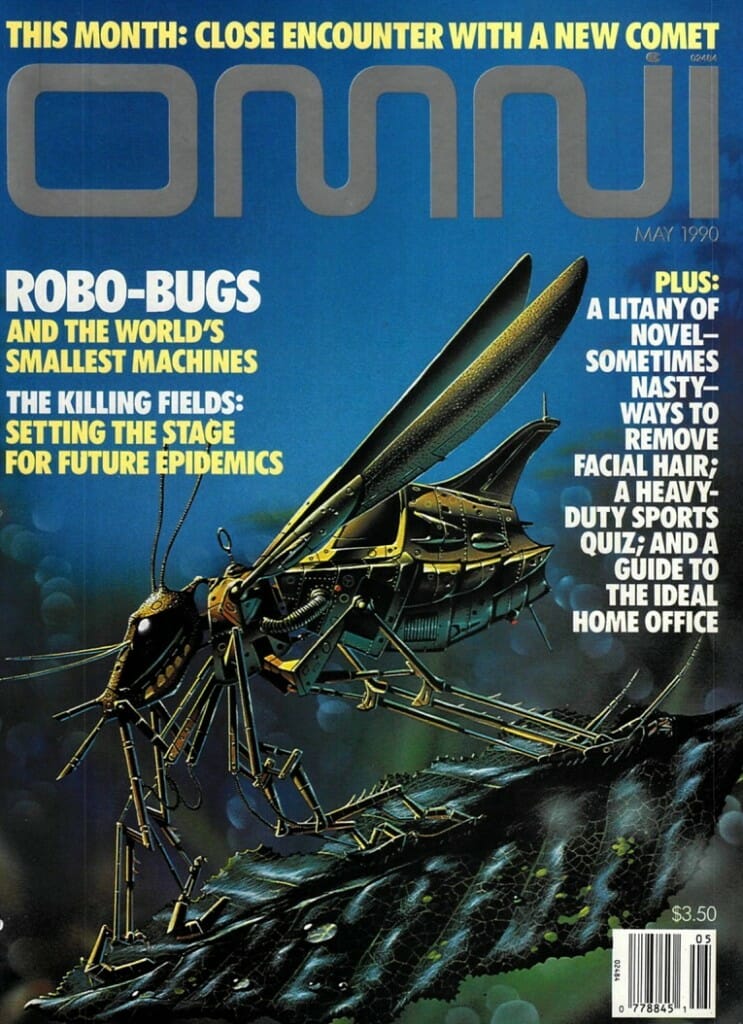 This seems quaint now, 30 years later… reading about the teething pains with cellular phones, cordless, and answering machines. Cellular, in particular, was such a complex jungle that I bicycled with a fat directory of service areas and their reciprocal agreements, as well as a yagi antenna the length of my arm to let me escape the tyranny of some regions and make calls in others. Dana really captured both technical and cultural changes well in this article, using me as a sort of extreme application example. (More details of the bike’s phone system are in my Cellular Business article.)

The Talk of the Town – Telephones

by Dana Blankenhorn
Omni
May, 1990

Steven K. Roberts is the ultimate mobile executive. His Winnebiko is a 275-pound home office — a recumbent bicycle with cellular phone, ham radio, and eight computers, including a Macintosh for “bike-top publishing.”

Since going on the road in 1983, Roberts has logged more than 16,000 miles. But phone technology has gone farther. When he started, Roberts says, he relied on a Columbus, Ohio, base station to keep track of messages. Now he sends data from the road using a Spectrum Cellular modem and Touchbase fax board, both of which use a forward error-correcting scheme to make up for choppy connections. His Oki 491 cellular phone is also integrated into an on-bike network, and he maintains service everywhere through a technique called roaming. He enters a code like “71” that tells computers in cellular phone switches where he is and bills his phone account.

The newest cellular phones won’t weigh down the Winnebiko, either. The Motorola Micro-TAC Personal Telephone, for instance, comes in at just over 12 ounces with a standard battery. Larger phones, which draw their power from car batteries, have more range and hands-free operation. One Chicago executive has his Motorola 6000 set to turn on when he says, “Hey, dude,” and to dial frequently used numbers upon voice commands such as “Call home.” He can also gab without taking his hands off the wheel. The price for such features can be high — up to $3,000. But a perfectly serviceable Panasonic unit can be had for just $500, and special discounts drop cellular service prices to 30 cents per minute from their normal 38 cents — when you agree to make or take at least five to eight hours of calls each month. (Cellular subscribers pay for incoming as well as outgoing calls.)

The most controversial phone innovation is Northern Telecom’s Maestro, which displays the number of whoever is calling you. This takes advantage of a new phone service named Caller ID, now being rolled out nationwide, and sold by phone companies as a way to stop obscene callers and false alarms on 911 lines.

There are other, less controversial innovations in phones priced at $100 to $300. AT&T now offers a two-line intercom speakerphone. Panasonic has a model that forwards messages at the touch of a button, and Innovative Communications, a division of a Swiss firm, has two phones with the same voice-activation feature found on the $2,500 Motorola 6000.

What people seem to want most in a phone, however, is no cord at all. Cordless phones, with tiny radios that carry calls from where they’re plugged in to you, now work at distances of up to 1,000 feet. But your mileage will vary, depending on the terrain, the number of wires around your home, which can cause interference, and the thickness of the walls through which the radio waves must travel. Even the best models don’t work clearly farther than 600 feet away from their bases.

One of the most important new features on Southwestern Bell’s cordless phones is a CLEAR button, which lets you move to another call if you have Call Waiting. Without this feature, you’re stuck dropping one call or the other.

Roberts, the roving bike exec, does have one complaint: He lacks an answering machine. “I need one small and light that works on the twelve volts of power output by my solar panels,” he says. He also could use something that actually works. That’s the big problem with today’s answering machines, quips Paul Edwards, who studies home-based businesses in Santa Monica, California. “Reliability is a major problem in answering machines. There’s some real shit out there.”

The problem, according to Pam Debandt of Southwestern Bell, is the cassette tape. “Voice chips offer improved reliability and allow you to have a smaller machine,” she says. Southwestern’s newest machines offer a voice chip for incoming messages.

Finally, since we can now all be reached on our cordless, corded, or cellular phones, a new form of etiquette is needed, says Ken Bosomworth, president of International Resource Development, Inc., a research firm in New Canaan, Connecticut. You need to admit when you can’t be reached and provide someone callers can talk to. “I don’t give out my cellular number,” Bosomworth says, but if an important call comes in, his secretary reaches him and he returns the call. “The people,” he notes, “who are most often using these new technologies are one-man bands, who can’t delegate to others.” Now that we can have it all in our phones, the real luxury is being out of touch.