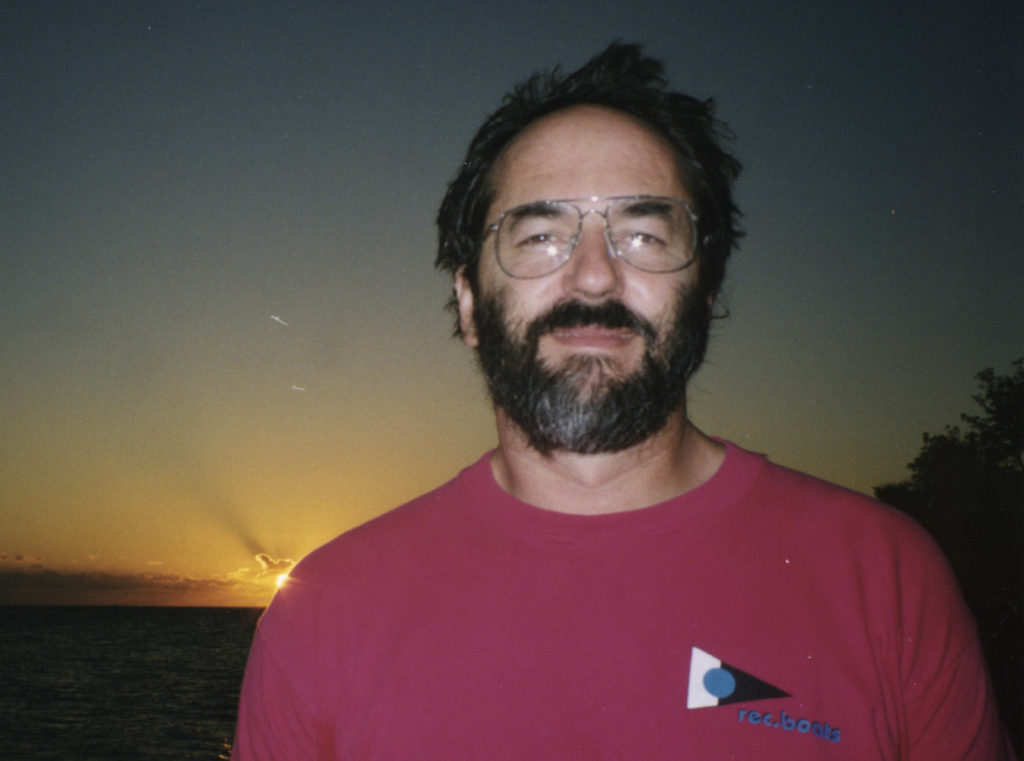 During my extended layover in Santa Cruz and Soquel, working on the third bike version (eventually named BEHEMOTH), I spent a lot of time relaxing on the spectacular beaches in the region… textile and otherwise. Somewhere in there I made friends with some folks at Lupin Lodge, and enjoyed a few visits in exchange for an informal talk. The local naturist newsletter (from whom I borrowed the graphic above) picked up a snippet from one of my beach tales, so I thought I’d drop this little story into the archive to show that this epoch wasn’t all about bike geekery! There is also piece from my book about Walking Naked in the Wilderness.

A Matter of Perspective

NOTE: This anecdote is excerpted from Steve Roberts’ article, “Immersed in Santa Cruz”, The Journal of High-Tech Nomadness, No. 8, April, 1990. Steve is a free-lance writer and computer consultant who gained fame (if not fortune) by relinquishing a stable job and home to live and work for years touring around the country on a high-tech recumbent bicycle.

The beaches are spectacular — it’s hard to imagine a more optimal setting for a town. The sunsets along the cliffs bring even the most jaded locals to a stumbling, gaping halt; while on balmy days (I seem to recall) the sands are strewn with well-oiled Beauty. There are even a couple of nude beaches in town, much safer and more convenient than the wild windswept ones up the coast where cars are sometimes vandalized while their owners frolic carefree in the surf.

One perfect warm day at the end of tourist season a few months back [fall 1989], Maggie and I spent the afternoon at a beach known numerically for its location along West Cliff Drive. Naked, we lounged about in a sheltered cove with a dozen or so other people, relaxed, non-sexual, at peace with the world. A small group conjured music from a kalimba, bongos, voices, and bamboo flutes; a woman nursed her child. A tan, muscled yogi danced alone, moved tai-chi-like and dove into the surf; a few people read or conversed quietly; I pattered for a few seconds on a laptop before sensing the absurdity and moving on to something more reasonable: dozing in the sun.

As the chill shadows of the cliff walls gobbled more and more of the beach, most of us dressed and drifted away. We were among the last to go, and arrived panting at the top of the rocky path to find two young clean-cut tourist couples hanging around the precipice in obvious agitation. “Shall we call the police?” one woman asked, as her fella stared down at the cove with a pointed look of disgust pasted on his face.

I followed his gaze — the bronzed yogi lay alone on his blanket, naked and unmoving. The woman prattled on. “I mean like, what if a little kid comes by or something? That is really disgusting. I think we better go call the cops, guys.”

“Oh my God, I thought he was like being a pervert or something!” Her hand flew to her mouth, and I hope she felt as foolish as she looked.

It’s a matter of perspective, isn’t it?