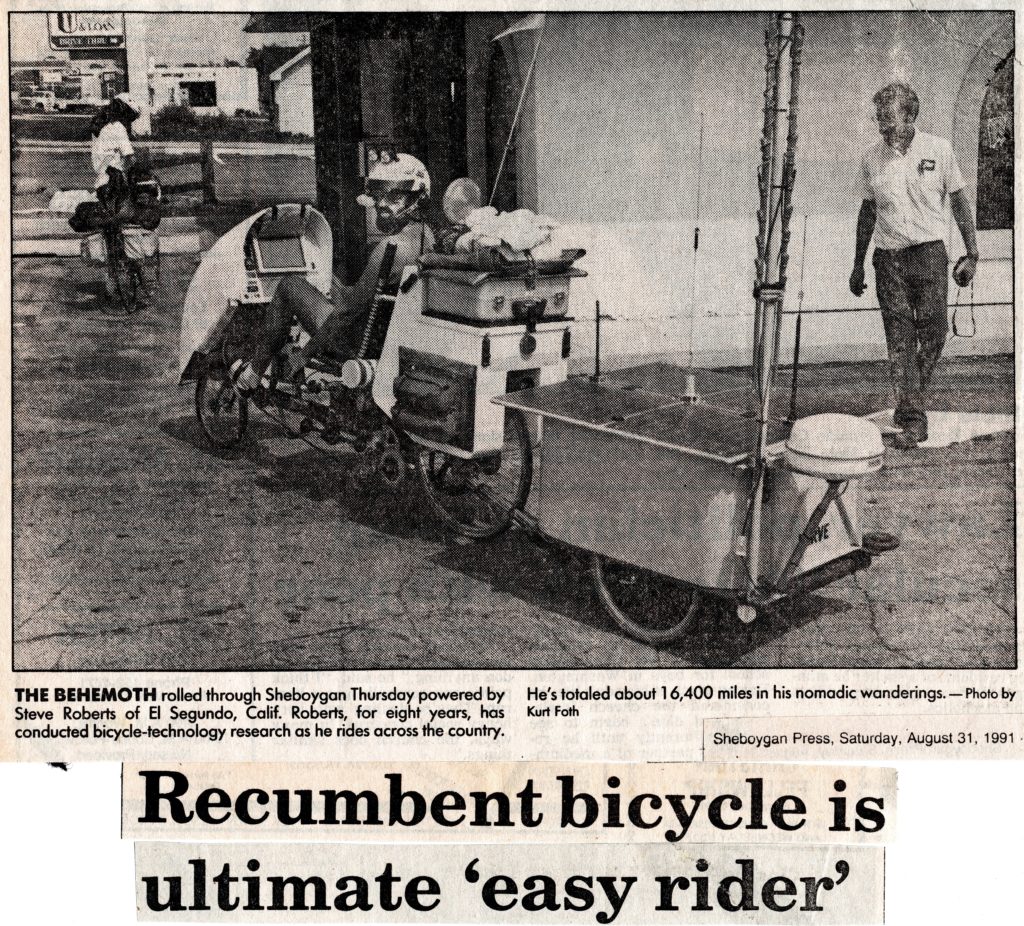 This local newspaper article came out during a dreamy phase of my wanderings… not only was I at last on the road with BEHEMOTH after 3.5 years of development in Silicon Valley, but I was traveling with a lovely friend named Susan, barely visible in this photo… out in front of my bike. She was often there, moving lightly and with much more freedom than my ponderous machine… and she appears in my Rhythms of the Road posting three weeks later.

On his self-designed recumbent bicycle, he looks like the ultimate “easy rider.”

But looks are deceiving. Most days, as he pedals across the United States, Steve Roberts is hard at work as a writer of magazine articles — all done on a keyboard built into the handle bars of the bicycle he calls the BEHEMOTH.

The word is an acronym for “big electronic human energized machine, only too huge.”

Roberts, 38, is from El Segundo, Calif., and he stopped at Sheboygan’s Spoke and Wheel bicycle shop Thursday to pick up a tire for his 580-pound bike and trailer unit.

He’s heading for New York City, by way of Des Moines, Milwaukee and around Lakes Michigan, Huron and Erie. For the past eight years, Roberts has been traveling across the country writing about his adventures and some of the solar-powered and foot-powered technologies he is pioneering.

When he’s not writing, he’s being written about. The July issue of Bicycling carries an article about him.

His own magazine and newspaper articles are transmitted through a miniature satellite earth station located on the back of his fiberglas storage trailer.

He even carries a fax machine in his trailer.

Among the high tech items he’s testing is a water-cooled helmet. The water is pumped from melting ice cubes stored on the bicycle.

Last night, Roberts slept at Point Beach State Park at Two Rivers under a tent designed to cover him as well as his bike.

Roberts calls himself a “a nomadic research lab,” and says he goes “where the wind blows me.”

“I’ve been meandering around the country for eight years with no definite destination. That’s the whole point of this.”

Much of his work is featured in his own magazine called Nomadness.

Currently he’s mulling an offer to tour Japan under the sponsorship of a bicycle company.

“But,” he adds, “I could just as easily go to Australia or Europe.”