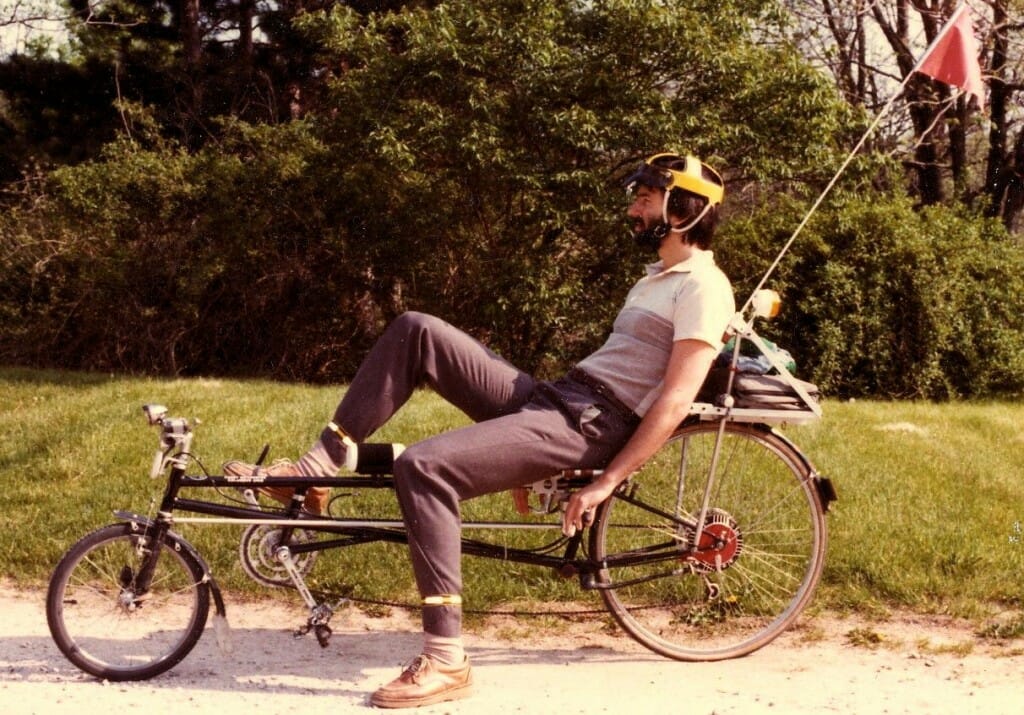 At the beginning of this crazy adventure, there was very little media coverage. Although I secretly feared that the trip would be aborted (by knee, bike, or financial problems), I rhapsodized at length, exhausting my friends with impassioned ramblings about beating the freedom-security trade-off and testing the viability of the information society by breaking the chains… you get the idea. I was trying on sound bites! This little article was in the local Hosteling newsletter, a friendly group… where I was hoping to find riding companions for the first few days of the journey.

(The photo in the page scan below was not in the original article, but the timing was accurate. I had just acquired that machine to pack on the bike, with CompuServe the network connection. The photo above shows me aboard Robby McCormick’s Avatar 2000, which was my recumbent inspiration while my custom bike was being fabricated.)

There has been a growing interest in “human powered vehicles” over the last few years, with recumbents of various sorts — even homemade ones — showing up in ever greater numbers. This year, we in the midwest are fortunate enough to have the annual International Human Powered Vehicle Association road races occurring in our neighborhood — at the Indianapolis 500 Speedway from September 29 through October 2.

This alone is worth noting, but it has special significance for me: it is the kickoff of my 1-year high-tech bike trip. If all goes as planned, I will be leaving Columbus on the morning of September 28 at 7:00 a.m. for a “shakedown cruise” that includes Indianapolis, Louisville, and Cincinnati. I’ll then be back in Columbus for a week or two to take care of the inevitable problems with equipment (and probably my knees!).

The trip is distinguished not so much by its route as by the equipment involved — and by the marriage of work and play that it represents. As a full-time writer, there is really no reason for me to maintain a house in suburbia (as I have been doing for the last 4 years), especially with the new products of the information age that have become available. I’ll be carrying a small word-processor in the form of the Radio Shack Model 100, and checking into the CompuServe network daily to “upload” and “download” work-in-progress. The trip is attracting the attention of corporate sponsors and magazines, and I’ll be kept quite busy writing monthly columns and miscellaneous feature articles. The will also be a book: Computing Across America: A Bicycle Odyssey.

In addition to the computer, my custom-made recumbent (built by Jack Trumbull of Franklin Frames) will be carrying some radio communications gear for emergencies, a pager-type security system, dictation equipment, and a centralized battery system with a solar collector to recharge it. (Not to mention camping gear!)

The key to the whole affair, of course, is the communication network provided by CompuServe. This will serve not only as the link between me and the rest of the world (via Kacy, my full-time “interface with the universe”), but also as my primary vehicle for social interaction. With something on the order of 70,000 subscribers, CompuServe represents a prime source of friendly human contact during what might otherwise be a very lonely venture. Hardly a day goes by that I don’t sign onto the system and find yet another message from someone who has heard about the trip, offering a hot shower and a place to stay.

This adventure represents what might be the ideal resolution of a trade-off that has confounded me all my life: freedom versus security.

I am writing here not only to announce the trip to the local cycling community, but also to make an invitation. The IHPVA event in Indianapolis should be a real treat for anyone interested in recumbents, and what better way to get there than via human power? Anybody want to go along? Several people including Robby McCormick have already decided to go along to Indianapolis and I would like it if more could join us. I’ll be heading to Louisville after the festivities; my companions could either accompany me through southern Indiana and northern Kentucky (about 11 days total) or simply turn around and head back to Columbus.

Come one, come all! Let’s make this a party!