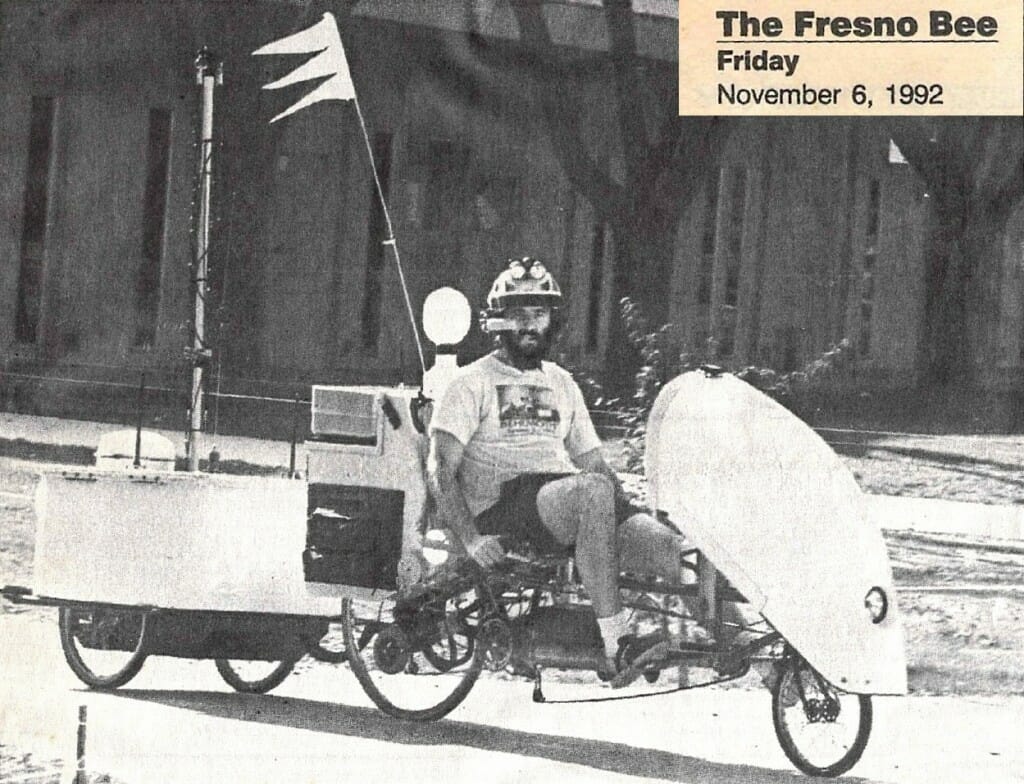 While schmoozing around the West Coast in search of development facilities, I was taking side trips for speaking gigs. From the text, it appears I was thinking that I was going to end up at the University of Washington… which would have been wonderful, but that didn’t happen. Ah, retrospect. Anyway, here I was visiting Cal State Fresno to do a talk sponsored by the ACM, IEEE, and the university’s student association. As often happened, a reporter from the local paper dropped by…

Steve Roberts, who has spent several years traveling the U.S. on a bicycle with computers, brings his technology to Fresno.

Roberts has traveled 16,000 miles. A geographical home is for him a convention that modern communications make unnecessary.

Roberts, 40, lives free and apart — but connected to the world through technology on his recumbent (reclining) bicycle. He knows people he never has seen. He works brain to brain instead of face to face.

He has defined his life according to his discovery of a link: Communications technology and the ability to live as a nomad.

Roberts spoke to computer science students and others, sponsored by the Association for Computing Machinery, the Institute for Electrical and Electronic Engineers and the Associated Students Inc. They paid him $500.

His bicycle, worth about $1.5 million, mounts computer keyboard and screens, fax, satellite feed, microprocessors, cellular phone with modem, amateur radio, speech synthesizer, security system and stereo and other stuff. Roberts can pedal, look into an eyepiece computer and down at a computer screen and keyboard — all at once. And he does.

He doesn’t crash, he said, because he has a “non-maskable interrupt.” Translated into non-computer talk, this means that messages he receives through his eyeballs, showing what’s in front of him on the road, have irreversible priority over what he sees on the computers.

Roughly 30 percent of what Roberts said was gibberish to any technological virgin who has trouble figuring which side to open on a tuna can.

Roberts has written a book, Computing Across America, and appeared on national television programs. The masthead of his magazine, Hi-Tech Nomadness carries the logo, “Roaming the Globe in the Information Age.”

He prepared Thursday for a computer hackers’ convention and appearances on British and Japanese television.

Life was not always like this for Roberts. He once was a work-a-day consultant in Columbus, Ohio. He did yard work on his ride-along mower with the slot for a beer can.

So he hit the road in 1983, applying computer expertise to love of travel. He decided to work while he pedaled.

“I’m basically a hand-to-mouth free-lance writer,” Roberts said. He writes articles as he pedals. He can send and receive information to and from points all over the world. It takes 5 to 6 minutes to send a message and receive an answer from Australia.

So his bicycle, and a “mothership” he sometimes uses to haul it, are all he needs for home.

An elaborate security system guards his bicycle. Try to steal it, and the thing talks to you and to police.

Plans on a kayak version

He usually travels back roads, but sometimes on freeways, moving up to 50.5 mph down hill, up to 11 mph on level ground.

He has new plans for a kayak version of his moving communications center. He will build it at the University of Washington. He is getting tired of the road, though not the metaphorical road.

Transposing his center to water will add another dimension — depth — to his “road.”

Roberts saw “not that much” paradox to his lifestyle: a man removing himself from a physical home, traveling alone yet feeling connected with more people.

“When you get right down to it, with all this technology, the best part is the human part,” Roberts said. “You’re just on the network. The net is our own world.”

He estimates about 5,000 contacts around the world, but constantly evaluates the conflict between freedom and security. Freedom is winning.

But the freedom leaves unanswered other needs. Asked if he ever misses a conventional, geographical home, Roberts said, “Yeah, I get almost teary-eyed when I’m with people with kids.”