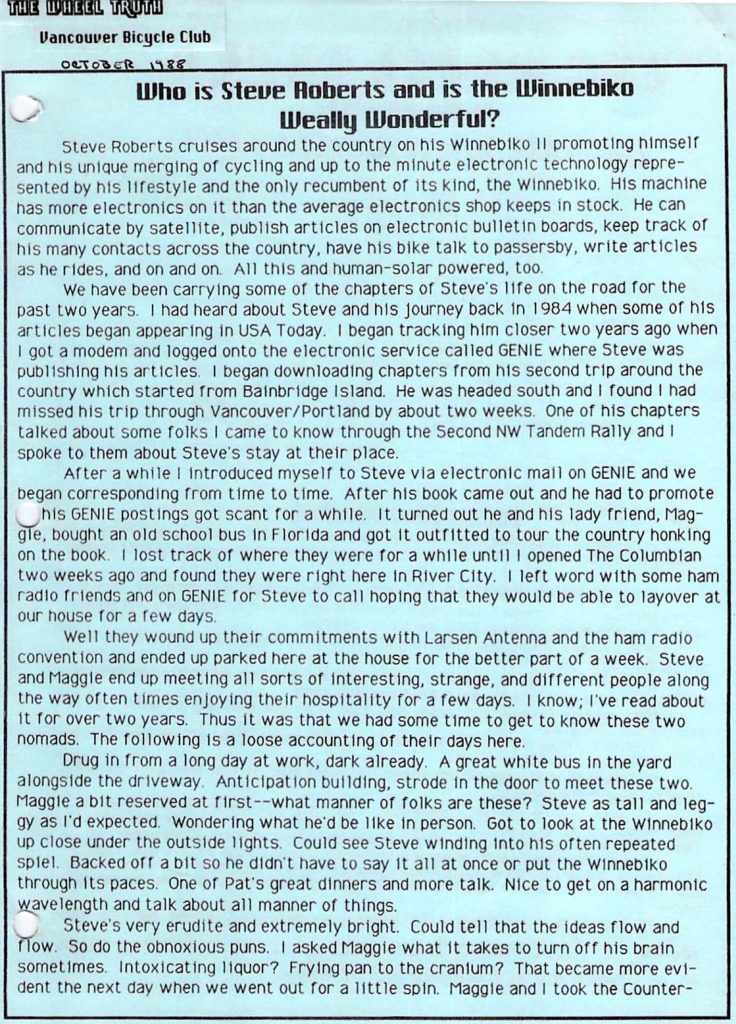 Who is Steve Roberts and is the Winnebiko Weally Wonderful?

32 years later, this brings back wistful memories. Maggie and I were traveling around the US the school bus, hauling cases of Computing Across America books and doing speaking gigs. We had pedaled 6,000 miles on both coasts, and were now rumbling through the difficult business side of the venture… visiting conferences, trade shows, companies, media events, and the best of all… friends we had met online. This piece is by Dr. Roger Humphrey, who had been a scintillating correspondent, and we soon discovered he was a gracious host as well.

This piece by Roger about our October, 1988 visit to his home was published in The Wheel Truth, the monthly newsletter of the Vancouver Bicycle Club.

Steve Roberts cruises around the country on his Winnebiko II promoting himself and his unique merging of cycling and up to the minute electronic technology represented by his lifestyle and the only recumbent of its kind, the Winnebiko. His machine has more electronics on it than the average electronics shop keeps in stock. He can communicate by satellite, publish articles on electronic bulletin boards, keep track of his many contacts across the country, have his bike talk to passersby, write articles as he rides, and on and on. All this and human-solar powered, too.

We have been carrying some of the chapters of Steve’s life on the road for the past two years. I had heard about Steve and his journey back in 1984 when some of his articles began appearing in USA Today. I began tracking him closer two years ago when I got a modem and logged onto the electronic service called GEnie where Steve was publishing his articles. I began downloading chapters from his second trip around the country which started from Bainbridge Island. He was headed south and I found I had missed his trip through Vancouver/Portland by about two weeks. One of his chapters talked about some folks I came to know through the Second NW Tandem Rally and I spoke to them about Steve’s stay at their place.

After a while I Introduced myself to Steve via electronic mall on GEnie and we began corresponding from time to time. After his book came out and he had to promote his GEnie postings got scant for a while. It turned out he and his lady friend, Maggie, bought an old school bus in Florida and got it outfitted to tour the country honking on the book. I lost track of where they were for a while until I opened The Columbian two weeks ago and found they were right here in River City. I left word with some ham radio friends and on GEnie for Steve to call, hoping that they would be able to layover at our house for a few days.

Well they wound up their commitments with Larsen Antenna and the ham radio convention and ended up parked here at the house for the better part of a week. Steve and Maggie end up meeting all sorts of interesting, strange, and different people along the way often times enjoying their hospitality for a few days. I know; I’ve read about it for over two years. Thus it was that we had some time to get to know these two nomads. The following is a loose accounting of their days here.

Drug in from a long day at work, dark already. A great white bus in the yard alongside the driveway. Anticipation building, strode In the door to meet these two. Maggie a bit reserved at first — what manner of folks are these?

Steve as tall and leggy as I’d expected. Wondering what he’d be like in person. Got to look at the Winnebiko up close under the outside lights. Could see Steve winding into his often repeated spiel. Backed off a bit so he didn’t have to say it all at once or put the Winnebiko through its paces. One of Pat’s great dinners and more talk. Nice to get on a harmonic wavelength and talk about all manner of things.

Steve’s very erudite and extremely bright. Could tell that the ideas flow and flow. So do the obnoxious puns. I asked Maggie what it takes to turn off his brain sometimes. Intoxicating liquor? Frying pan to the cranium? That became more evident the next day when we went out for a little spin. Maggie and I took the Counterpoint tandem. Steve took his Winnebiko (sans trailer). We only had a couple of hours light so we hit some back roads and pushed to get to a favorite view point not far from the house for the sunset. Maggie liked the front of the tandem, but was unused to be biking without radio contact with Steve. I could tell she missed talking to him. We cruised faster on the tandem than Steve and waited a few times for him to catch up.

Each time he would pull alongside he would tell us how he had brainstormed up the way to put together this diggeroo and that hypercommunodigital system on the upcoming Winnebiko III. We had to push the last several miles to catch the sundown and Steve was visible faintly in the Third Eye mirror. When he caught us he allowed as to how he missed having the radio contact because he had some things to say at least five different times, three of which were, “Slow down!” He noted that two bods on 50 pounds went a bit faster than one on a 250+ pounder recombo-technicruiser.

President Gifford tried to recruit Steve for the Club meeting but I sensed that Steve would prefer a little more time to regroup before going out into the spotlight for two weeks in Seattle. It’s funny meeting someone like Steve because you feel like you already know him somewhat because of having read his rolling autobiography. It was neat to be able to check out some of the between the line items I’d suspected as well as ask what he hadn’t been able to put in the book to keep the XXX rating at bay. You know how it is with old friends you have shared experiences with that you both remember? It’s sort of like that with Steve, only you shared by reading. He has a great memory for most of his stories and likes to say, “Remember when we were in Opascagoola right after we left the house of the Pagoodniks who fed silicon android mice to their Burmese cats?” You say,” Oh yeah; wasn’t that just before you met the almost born again colony of space lute players outside of Tuskeegee, Alabama?” Then he says, “Yes, yes.” And then you have another drink.

Speaking of drink. I was on call one of those nights and figured on staying sober and hitting the rack early for some prophylactic ZZZZZ’s (that isn’t near as nasty as it sounds, although Steve did make me repeat it. Pat, Maggie, and Steve had begun on vodka tonics before dinner and it was soon apparent that some folks in the house wouldn’t be feeling any pain. Now Pat and Steve both grew up in Louisville, KY and the L-ville stories started a-coming. My favorite that I hadn’t seen written had to do with growing up a techno-nerd in Louisville. Steve was a couple of years ahead in school, skinny and long only child and thus grew up with not so many friends but an abiding interest in radio and electronics. The local bullies caught him on the way home one day and roughed him up good. He retaliated by inventing a stun gun set that he mounted on his bicycle. What was especially sinister is that it shot twin streams of salt water which was a perfect conductor for the 15 kilovolt charge he had stored up. He cycled around trolling for the inevitable bully ambush and left a pile of temporarily paralyzed bully bodies as well as some of them in full flight. When he ran out of fuel for his spray nozzle, he streaked home waiting for the counterattack. Needless to say, it never came that day or most any other.

So if you see the Winnebiko by itself out there some day and approach it and it says, “Leave me alone or Steve’s gonna getcha!”, take heed. This guy is the original silicon hotrodder. He’s got more volts and megabytes under the Lexan hood and cranium than you’ve ever seen.

Thank you, Roger, for a most wonderful visit… and I regret dropping out of touch as the years passed.