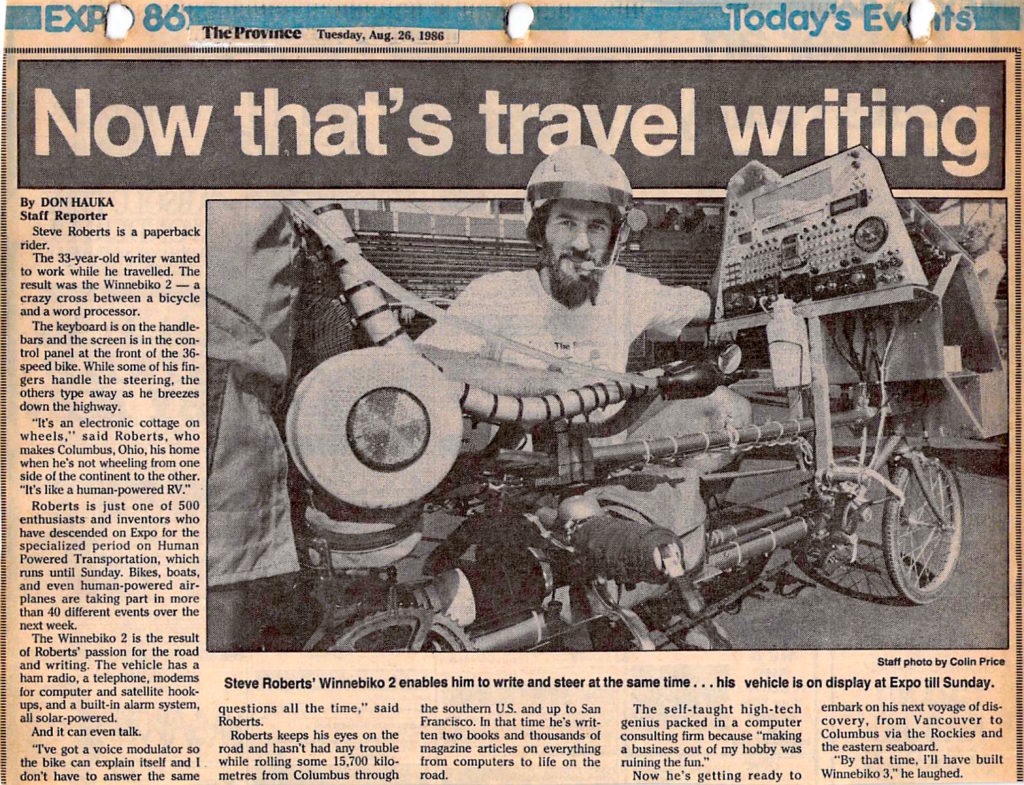 The “trade show deadline” that got the second version of the bike out the door was Expo 86, an event that was unexpectedly pivotal in my life. Significant friendships began here, and when it was over Maggie and I headed for Bainbridge Island to spend a month working on the systems before pedaling down the West Coast. This article in The Province (Vancouver BC) gives a glimpse of the bike during that crazy week. Below is a second article, which appeared on the same day in the Vancouver Sun.

Steve Roberts is a paperback rider.

The 33-year-old writer wanted to work while he travelled. The result was the Winnebiko 2 — a crazy cross between a bicycle and a word processor.

The keyboard is on the handlebars and the screen is in the control panel at the front of the 36-speed bike. While some of his fingers handle the steering, the others type away as he breezes down the highway.

“It’s an electronic cottage on wheels,” said Roberts, who makes Columbus, Ohio, his home when he’s not wheeling from one side of the continent to the other. “It’s like a human-powered RV.”

Roberts is just one of 500 enthusiasts and inventors who have descended on Expo for the specialized period on Human Powered Transportation, which runs until Sunday. Bikes, boats, and even human-powered air planes are taking part in more than 40 different events over the next week.

The Winnebiko 2 is the result of Roberts’ passion for the road and writing. The vehicle has a ham radio, a telephone, modems for computer and satellite hook ups, and a built-in alarm system, all solar-powered.

And it can even talk.

“I’ve got a voice modulator so the bike can explain itself and I don’t have to answer the same questions all the time,” said Roberts.

Roberts keeps his eyes on the road and hasn’t had any trouble while rolling some 15,700 kilometres from Columbus through the southern US and up to San Francisco. In that time he’s written two books and thousands of magazine articles on everything from computers to life on the road.

The self-taught high-tech genius packed in a computer consulting firm because “making a business out of my hobby was ruining the fun.”

Now he’s getting ready to embark on his next voyage of discovery, from Vancouver to Columbus via the Rockies and the eastern seaboard. “By that time. I’ll have built Winnebiko 3,” he laughed.