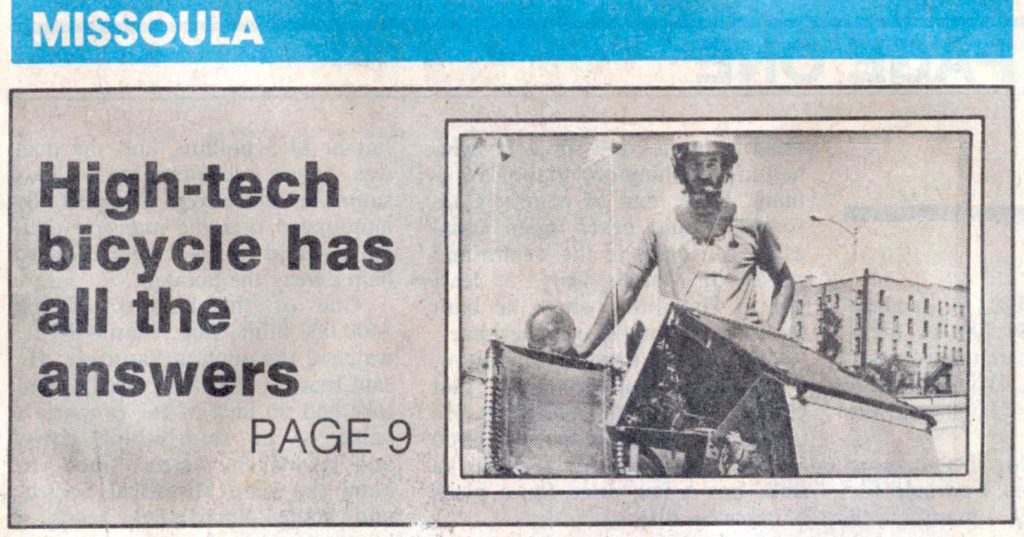 This article was at the very beginning of the Winnebiko II epoch, taking place during the cross-country van trek while Maggie and I were hauling the bikes to Vancouver BC to display at Expo 86. A stop in Missoula was mandatory, as it had become a legendary Mecca in the bicycle touring community… thanks to what is now Adventure Cycling. This article was in the local newspaper, catching us during the mad dash to make it on time.

by Gordon Gregory
The Missoulian
August 24, 1986

Steven Roberts, a former computer designer, likes to write. He also loves to travel — slowly — and he’s a nut about high technology.

Certainly a mixed bag of interests, but one he’s translated into a recumbent-style, 36-gear mobile computer that resembles an elongated bicycle. The screen is where the handlebars are located on most bikes. The keyboard is built into the grips of the handlebars, which are set beneath the seat.

There is a method to the high-tech madness.

“I write for a living. I travel full time and the combination gets a little tricky,” said Roberts, who stopped in Missoula on Saturday on his way to Vancouver, British Columbia, where he’ll display his machine at Expo ’86.

“This is a combination of all my favorite things.”

After Vancouver, he’s off on his second trans-country tour, the maiden voyage for the built-in computer.

He’s already had the bike — which he designed — on a year-plus cross-country trip that ended in mid-1985. But he used a portable computer for his writing then. That had its drawbacks, chiefly the loss of writing time.

Roberts estimates that the 9,760-mile-long trip in ’85 — a circuitous trek through the southern half of the country — took roughly 10,000 hours of pedaling. That amounts to a lot of fertile time for a wandering mind.

The 33-year-old Roberts, whose home base is in Columbus, Ohio, said it also was difficult to write after a day of biking 50 to 100 miles.

“Now I can write and pedal at the same time,” he says.

He hasn’t tried it yet: The computer isn’t completely wired and he’s transporting it to Canada in the back of a van. But he’s confident it’ll work.

The solar- and battery-powered computer translates a binary code into letters and text that appear on the small screen.

The grips of the handlebars each contain four buttons. Five of the buttons give Roberts 32 character combinations, enough for the alphabet. A sixth button is for capitalization; the seventh is the control button (which keys the computer for a command) and the eighth is for numbers and miscellaneous characters.

The computer also has an up-link through which he can communicate with a low-orbiting satellite and send information to his office computer in Columbus.

Roberts said that writing on the road is the only way he can see the country without either working odd jobs along the way or waiting until he amasses a fortune.

To date, most of his published articles have appeared in electronic trade journals or computer magazines.

But he says he’s interested in doing more travel pieces for other publications.

He also has a book coming out in November: “Computing Across America: The Bicycle Odyssey of a High-Tech Nomad.”

Roberts designed almost everything on the bike, from its computer console to the rear-mounted packs.

He concedes the bike is heavy, but says he’s not interested in speed.

“Try to figure your whole life into a 225-pound machine introduces some interesting trade-offs,” he said.

“Life’s bottom line is fun. This is a way to get paid for playing,” he said.