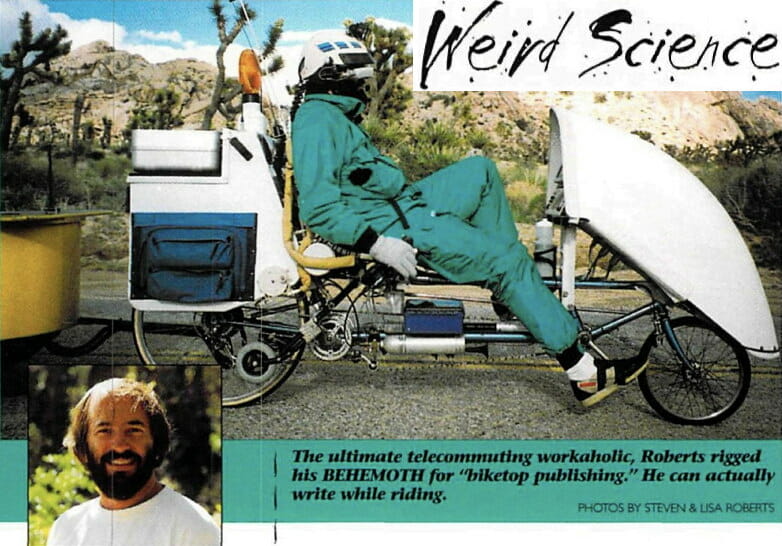 The full version of this article features five of us “x-treme telecommuters,” though I have only reproduced my page below. I am honored to be in the company of others whom I respect: the amazing walking Photogypsy, Almitra Von Willcox… the Expedition 360 guys, Steven Smith and Jason Lewis with their boat Moksha… my old friend Mark Eppley, former president of Traveling Software turned mountain climber… and Sid & Kristanne Heaton traveling the US in Otto von Auto. One of the best things about the technomadic life is the diversity of our widely scattered community. Re-reading this makes me want to track them all down and throw a party (in particular, where is Almitra? If you know, please tell me…) 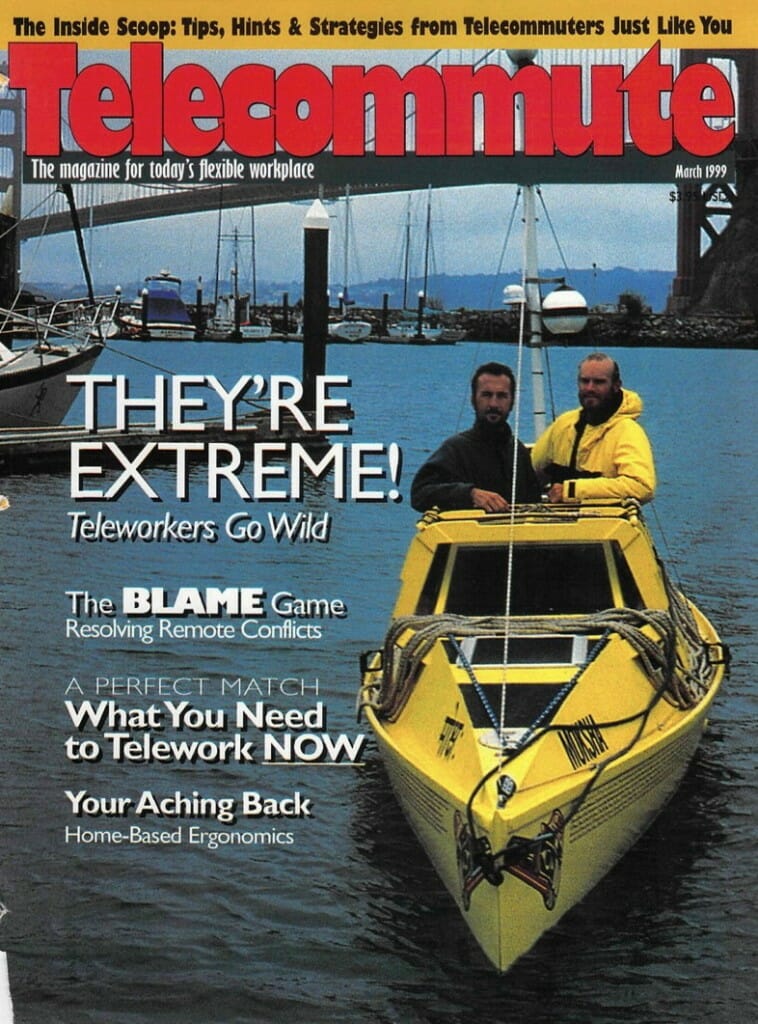 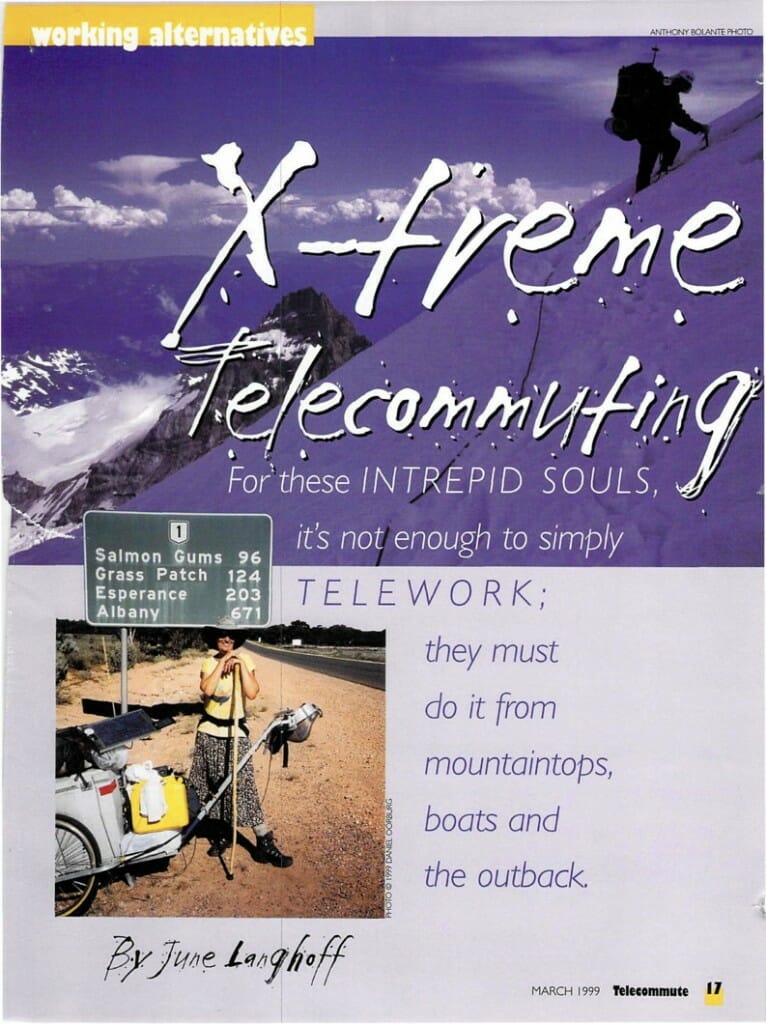 Back in 1983, freelance writer Steve Roberts sold his home in Ohio and took to the highways of America on a homemade, computerized recumbent bicycle fitted with enough tech gear to stock a computer store. The latest version of his bicycle, named the BEHEMOTH (Big Electronic Human-Energized Machine, Only Too Heavy) weighs 400 pounds, and requires 105 gears and hydraulic brakes. Traveling on BEHEMOTH and an earlier incarnation, the Winnebiko, Roberts covered 17,000 miles and visited 28 states.

Roberts outfitted his bike to serve almost every work need. Built into the handlebars are a number of LCD panels, allowing him to monitor the bike’s condition and perform “biketop publishing” tasks. Five computers, including an Apple Macintosh, Sun Microsystems SPARCstation and DOS-based PCs, allow him to multitask in a variety of environments.

Behind the bike is a 4-foot yellow trailer bristling with antennas. With AC outlets often days apart, Roberts rigged the bike to be a portable renewable generator. Solarex photovoltaic panels provide basic power and are backed up by a motor-generator in the hub of the front bike wheel, powered by pedaling. Surplus power is stored in a pair of 15-amp batteries.

He runs his business, Nomadic Research Labs, while wandering. Among his activities, Roberts publishes the quarterly journal Nomadness, sells books and technical reports about the adventure, speaks at conferences, consults with corporations and develops his many inventions. He even carries a credit-card swiper on the bike so he can handle plastic on the road.

“Since my physical location is irrelevant, I’m free to spend a large part of my life exploring, visiting friends and expanding my world,” says Roberts. “There’s a tremendous sense of security in knowing that your resources are all with you (or inside you), as opposed to requiring the infrastructure of house, employment and tons of possessions.”

Roberts actually writes while cycling. To do this, he’s invented or cobbled together a handlebar chord keyboard, a thumb joystick, an ultrasonic mouse controlled by head pointing, a text-to-speech board and low-power rugged computers. He downloads e-mail via satellite, displays text on the console screen onjhis handlebars or routes it to the Private Eye (a floating display just below his center of vision) or pipes it to the speech synthesizer. He rewired the innards of a standard cell phone so calls can be switched to the bike helmet’s boom mike and left earphone.

To discourage thieves, Roberts installed an elaborate security system. If anyone touches the bike, Roberts’ pager goes off. He can then choose from a menu of voice responses, including commanding the bike to warn, “Take your hands off me.”

A major advantage of BEHEMOTH is versatility. The disadvantage is weight. Citing “Roberts’ Law of Applied Mobile Gizmology,” Roberts explains, “If you take an infinite number of light things and put them together, they become infinitely heavy.” Now 45, Roberts recently found himself tiring of the road, and his thoughts turned to watercraft.

BEHEMOTH now resides in the Computer History Museum [corrected from article]. In the meantime, Roberts is busy in his lab on Camano Island, Wash., working on his latest invention, a wind-, solar- and human-powered trimaran. Learn more about his new project at microship.com.